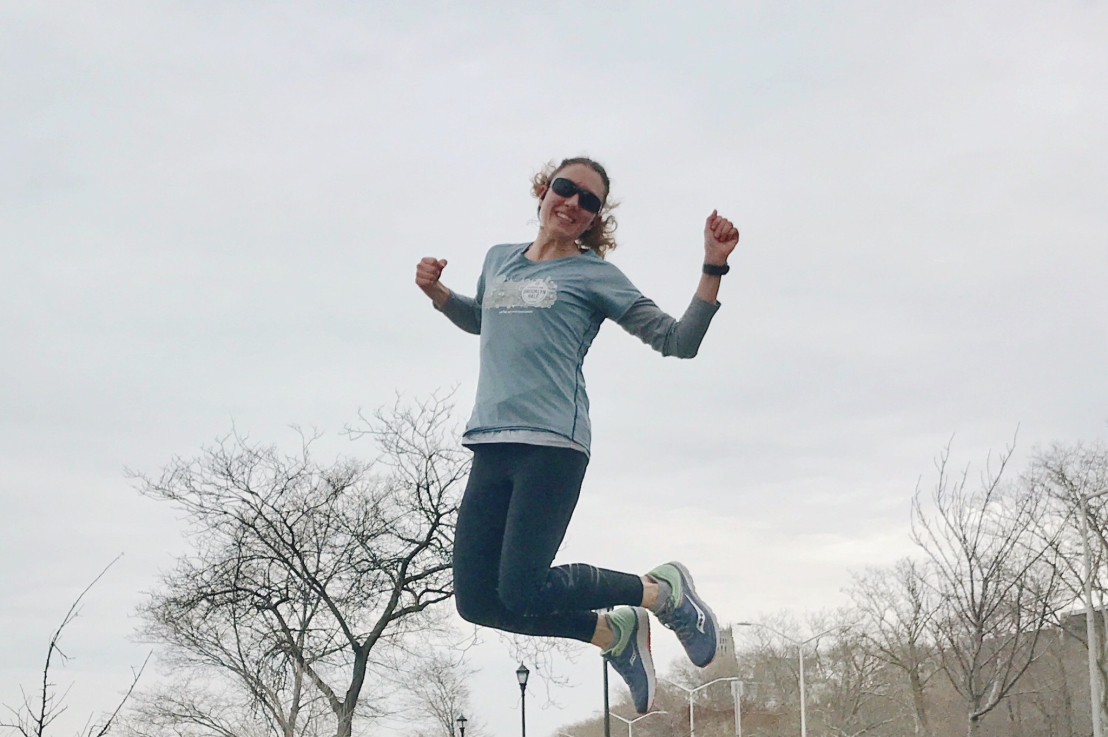 Lucky week 13 of training for the New Jersey Marathon was my highest mileage week, ever: 57.51 miles! And, luckily, nothing went terribly wrong. No soreness. No catastrophes. No icy rainstorms, no numb fingers. The week ended with my longest training run of the cycle, which went… not exactly as planned. But not horrible, either.

This would be the last week of training before the Great Taper, which, as of this writing, I have just begun. Crazy that I’m here already. I feel like the race was so far away for so long. Now I have less than three weeks to go. I can almost taste the Jersey Shore salt water taffy now… 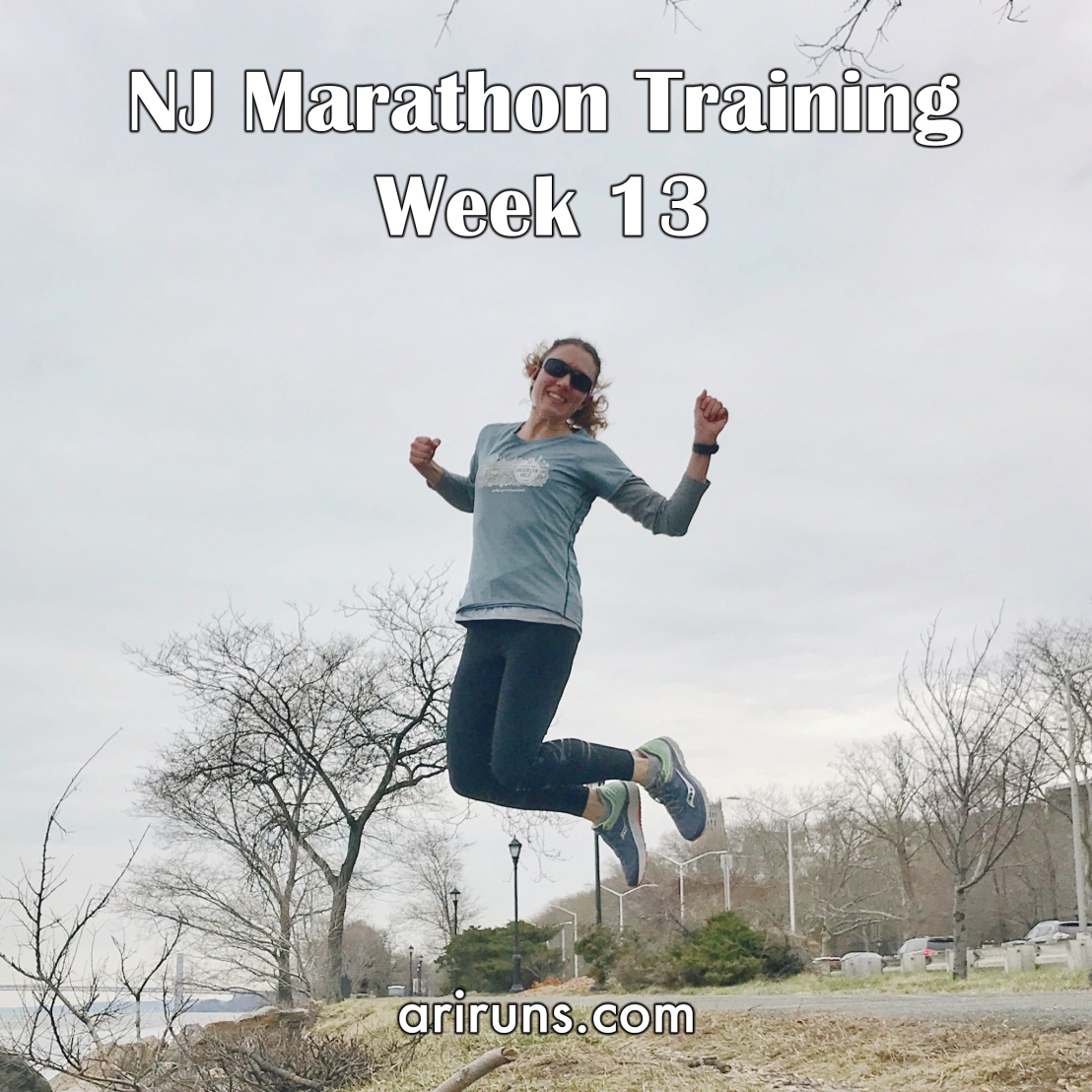 Monday was, as usual, my off day. Just an upper body workout, and I actually did a different one for once (but still Fitness Blender, my go-to site for strength training): the 35-minute Compound Upper Body Workout for Strength and Coordination. I really liked it. It combines moves instead of focusing on only one body part at a time. I felt like it was a good bang for your buck (which on their site is free!).

Tuesday was an easy 6 miles around Central Park at 10:04 pace. I’ve been hovering around 10 lately for easy paces and I like it there. My plan says most of my easy paces should be 10:28 but that usually feels uncomfortably slow. I could have made this 7 miles but I knew I had a lot coming up this week and didn’t want to push it.

Wednesday I headed back to the track for my last “fast pace” workout of training! Everything after today will be either easy or marathon pace. Pyramid structure: 3-6-9-6-3 minutes at 10K pace with 3 minute jog recoveries in between. Paces were pretty much in range, with a little fatigue toward the end (7:41, 7:48, 7:46, 7:42, 7:58). With the two miles both there and back, 8.89 miles total. I followed this at home with a short & easy lower body workout using only body weight.

Thursday, as usual, was an easy day, again around the good old Central Park loop. I felt like 7 miles today would get me to the weekly totals I wanted, so 7 it was. Slightly faster than Tuesday at 9:50 pace. Followed with my usual Thursday upper body workout.

I made this hard day hard by following the run with my favorite squats & deadlifts workout. (I used to use 8 & 10 lb. weights for this workout and now I use 10 & 15 lb. weights. Two weeks out from the race, I’ll stop using weights with this workout.)

Saturday I wanted to keep super easy because I knew Sunday would be a monster. Just 4.5 miles around the bridle path outside the reservoir and back home. That’s it. Maybe because the run was so short, I ran a 9:42 pace, faster than I have been for easy runs.

Sunday I ran 22 miles over the course of about three and a half hours. This was a long run with a twist: I was scheduled for 14 miles at easy pace + 60 minutes at marathon pace. I almost did this. I did run 14 miles easy, and I did run 7 miles faster (this segment was about 62 minutes as it was easier for me to just measure the entire run in miles). However, the 7 miles were slightly slower than my target marathon pace. I’ll write more about the run below.

Knowing that Wednesday’s interval workout was my last “fast” one of this training cycle was somewhat bittersweet. I actually love running my 10K pace at the track and knowing I won’t for a while is a little sad, but ALSO good because it means I am about to go through a much-needed recovery period.

Also, at the track I managed to remember to do some drills, something I am trying to do before my interval workouts. Here I am working on lifting my knees in runs by skipping with my knees up high. 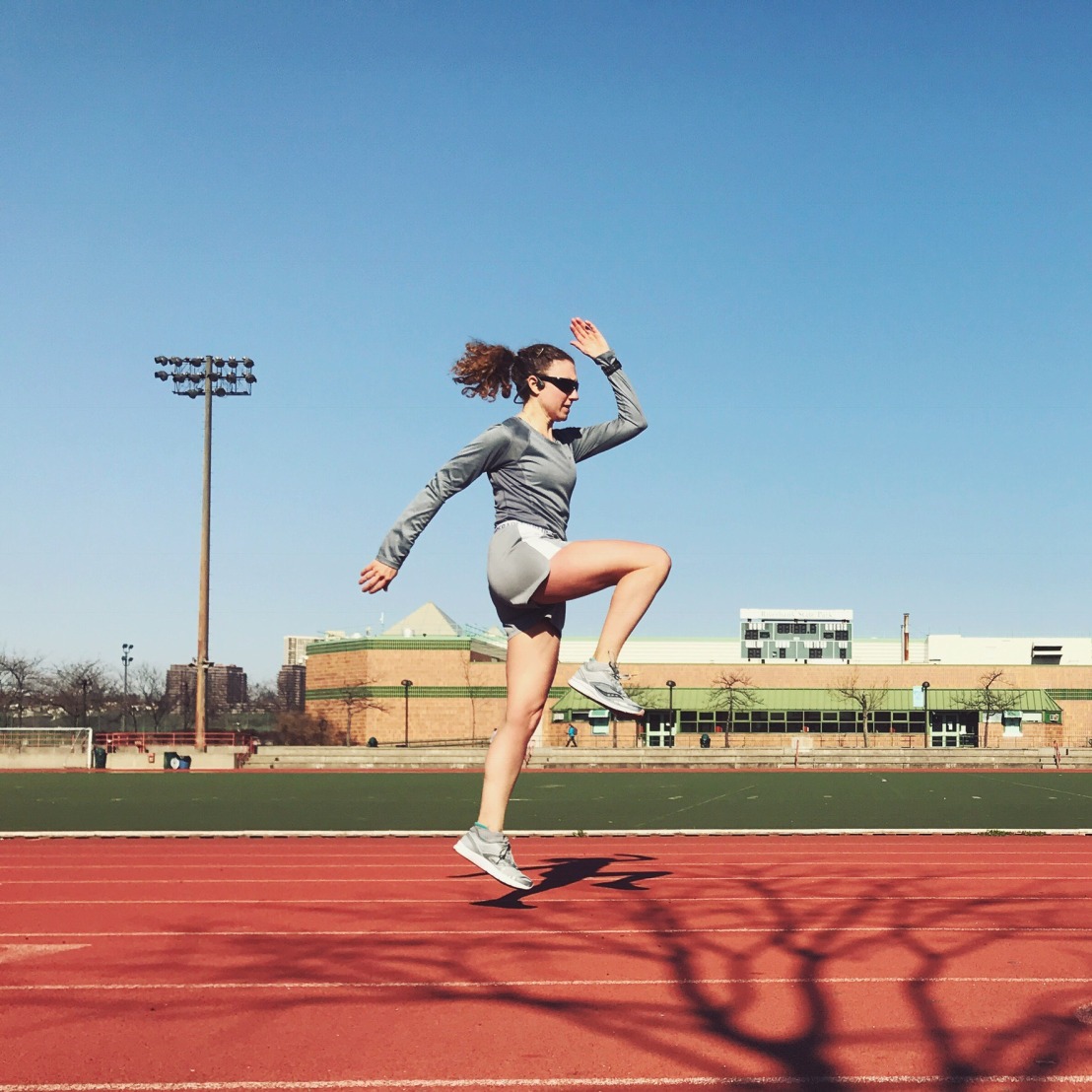 I think I got a pretty good selfie considering I used the timer, although this is my favorite part of the pic: 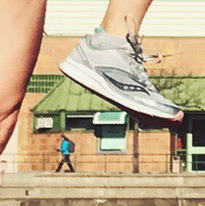 Have I mentioned my favorite post-run snack? I guess you could call it my second breakfast. I have a protein shake using Vega Clean Protein and a Superhero muffin with peanut butter. I put the shake in a bowl so I can eat it with a spoon so it feels like melted ice cream. (I think I’ll write a separate blog post about exactly what I eat pre and post run with the exact recipes and then link to them from here, if you’re interested.) 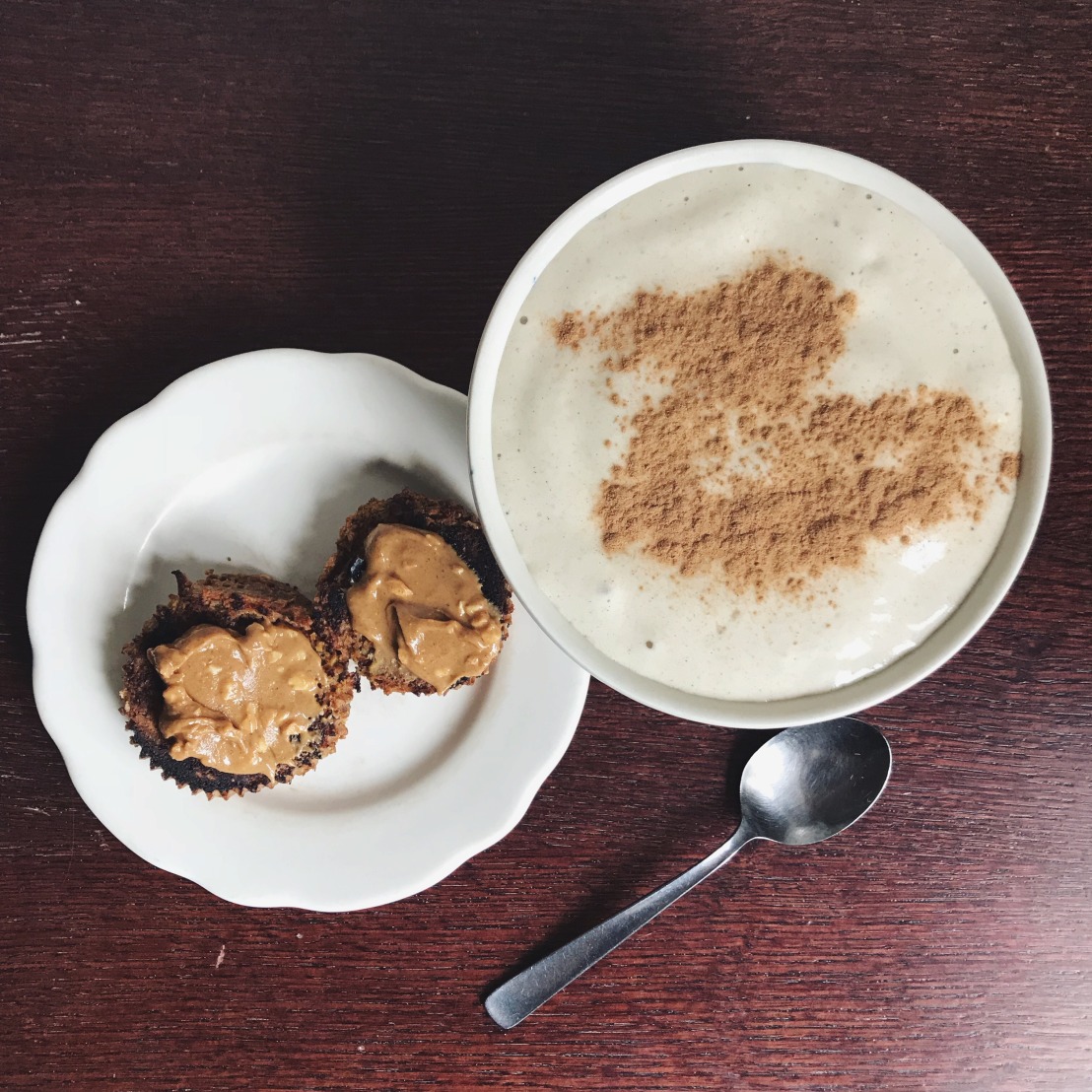 As I wrote earlier, I was really happy with how the tempo run went. I was definitely nervous beforehand. In my last training cycle, for the NYC Marathon, I never ran any marathon pace tempo runs like this. But I was so pleased that I nailed this one. I purposely listened to music during it and I think it helped. I have several Spotify playlists that I use for faster running (and just walking around), separated by genre. Lately, I’ve been loving my 80s/synth/new wave/dark wave playlist, and that’s what I had playing for this run.

In fact, I vividly remember Anne Clark’s “Sleeper in Metropolis” starting as I began mile 3 and I love that beat so much (it kicks in at the 40-second mark), it honestly felt like a drug entering my system and I felt like I could run forever. At that point, for some reason, I knew I would run the entire 7 miles with no problem.

Okay, about this monster.

I’ll write about what I ate in detail in my fueling post. Basically, I repeated the Nuun water from last week and instead of Gu on the run, I ate Picky Bars. I really liked them!

I wanted to emulate Friday’s tempo run by running along the Hudson River Path north of my apartment. This is right along the water, so it’s super flat. It’s also usually sparse in terms of other runners and cyclists (who are way more intimidating than runners, especially when the path is at its most narrow), although I should have known that Sunday activity would be a bit less sparse than usual.

But I had 14 miles to run before the 7 mile tempo, so I figured I’d just loop around Central Park and the reservoir a couple times and then make my way to the river around mile 12, which is exactly what I did. 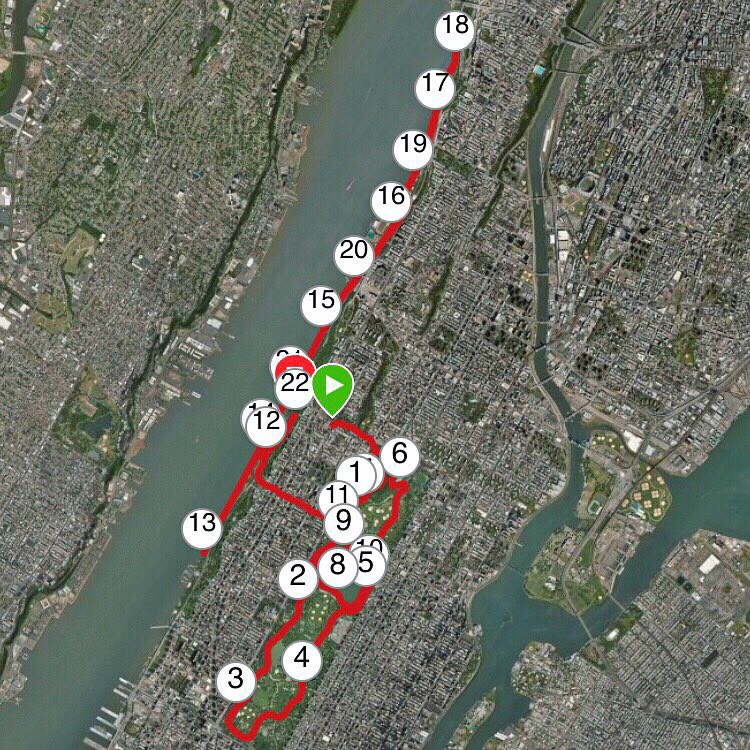 I arrived at the river at mile 12 and decided to run south for a mile and back so I could begin mile 14 close to where I would finish. I knew there was a turnaround point about four miles up so this would work out nicely.

I should add, I did not make a bathroom stop all morning and was pretty happy about that, as I would prefer not to stop in the race. I only stopped once around mile 12 to get some small rocks out of my shoes and to switch from podcasts to music.

The first 14 miles was pretty easy. I stayed mostly within the 9:45 – 10:15 pace range, a bit faster than what was prescribed, but again, running around 10:30 feels almost harder than 10:00 because I feel like my form suffers a bit. I have a hard time running slowly and not feeling like I’m dragging.

I hadn’t anticipated so much sun along the Hudson. I typically run earlier in the morning and by this point, it was between 10:30 and 11:00 am. Thank the lord I wore sunscreen, because I’m really sensitive to the sun and afterward I could see the little spots I had missed. 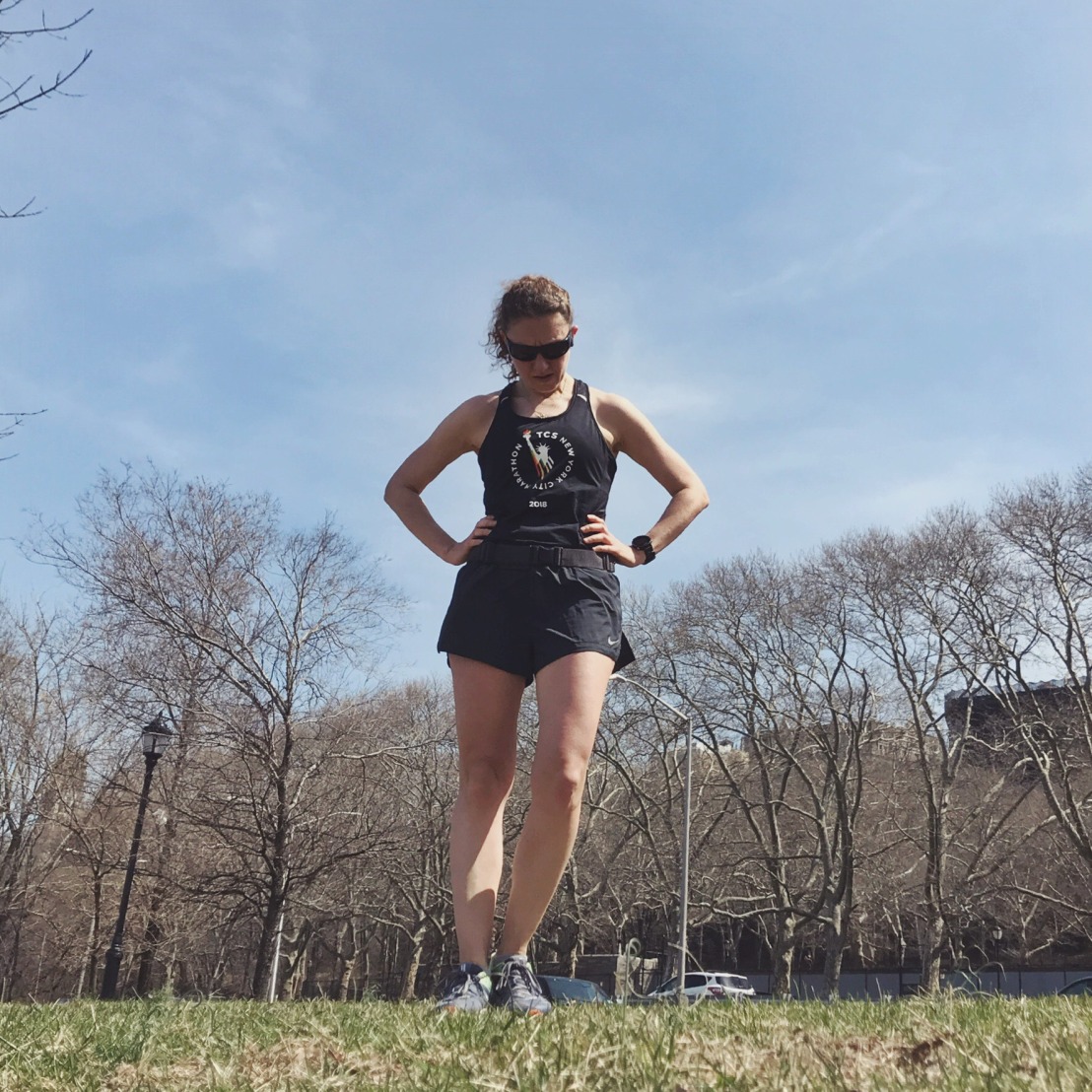 I wrote a little post on instagram about my thoughts during the tempo. I did try to stay positive and I think I managed to do that. I did my best, even if it fell short of my goal. I tried to remember that I am not rested the way I will be on race day, which I hope makes a difference.

I wasn’t too destroyed by the run, emotionally or otherwise. Still, I wound up taking two whole days off from running following Sunday. I needed it.

Week 14 is the first week of tapering and so far it’s going well! I’m almost there, New Jersey. See you soon.