I was going to just keep track of my fueling experiments in a spreadsheet, but I decided to turn it into a little old blog post. For the next four weeks leading up to the New Jersey Marathon, I’ll update this post every so often with how I’ve been fueling for my runs, what’s worked for me, and what hasn’t. Probably mostly on my long run days.

Fueling is a highly individual subject. There’s no one right way to do it. I see a lot of runners ask, “What should I eat before a race?” Well, that’s up to you. That’s just one of the things you need to figure out as you train. Experiment, try different things, and see what works.

For this post, I’ll write about what I’ve tried so far. If you’re in the midst of figuring out how to fuel for your own races, take whatever you want from what I’ve done and figure out what works best for you. I’ll start with what I’ve been eating before and during my runs, then get to what I’ve been doing specifically for my long runs leading up to the race.

After years of experimenting with what to eat before a run, I think I’ve finally nailed it. I’ve tried everything – from eating absolutely nothing to only coffee to no coffee to half a protein bar to a handful of dried fruit to some nuts to avocado toast.

These days, I eat the same breakfast every morning, no matter what kind of workout I’m doing that day. I eat within 30-60 minutes after waking, which is usually 5:30 am (yes I am a morning person).

I eat this every morning and I love it. (I use Bob’s Red Mill oat bran and rolled oats, and whatever is the least expensive brand of free range large brown eggs I can find at the store, lately Nature’s Yoke.)

I used to add peanut butter, cinnamon, and maple syrup to my oat bran. This is delicious, but it started to feel too desserty to me. Don’t get me wrong, I love dessert. I just don’t really want it at 6 am. I wanted it to taste more like a meal, so one day I tried it more savory with the egg, salt & pepper and I never looked back.

For the past year or so, my go-to energy before and during runs have been Clif Bloks and GU gels. Once I realized that I could eat during runs (truly a revelation), I would bring a few Bloks with me to pop in my mouth every few miles. But I didn’t love having to chew them, and I especially didn’t want to be doing all of that chewing during a race.

I really love the taste of the black cherry Bloks (the only flavor I’ve ever tried) and they do give me a little extra kick, so I’ve continued buying them – but to have before, not during a run. These days, I eat two Bloks as I’m doing my warm up routine inside.

Last summer I began taking Gu on runs to have every few miles, as it requires no chewing. This past winter, since Central Park shuts off its water fountains for the season, I started carrying a water bottle on runs over 10 miles. I would squirt a Gu or two into the water bottle and just ingest it that way, a few sips every three miles. (I use one Gu for every 8 oz. of water.)

I’ve also been bringing a Gu+water bottle with me when I go to the track for interval and tempo workouts.

As I wrote, for my long runs this training season I’ve brought a 16 oz. water bottle with 2 diluted gels. I realize this isn’t a whole lot – each Gu is only 100 calories, and 200 calories over the course of a 3 hour run is probably not enough. I have yet to bring any kind of solid food with me on a long run this year.

For the last four long runs of this marathon training cycle, I’ll be experimenting with different types of fuel and will update this post as each week passes.

This was kind of an oddball morning: this distance covered 3 hours and 40 minutes total, longer than I would normally take to run 17.94 miles. From 8 am to 10:10 am, I ran 12.2 miles on my own (with one bathroom stop). I then met my running club at 10:10, and at 10:22 we set off for an additional 5.74 miles over the course of an hour and 20 minutes. (Although only 56 minutes of actual running; the group I was with stopped quite a bit at intersections, etc. I’ll write more about this run in my upcoming weekly training recap.)

Verdict: I liked both Nuun and Sports Beans! The Nuun wasn’t too sweet or too salty or too anything. Just a hint of flavor. There are only 10 calories in a tablet, so that’s why I decided to bring 2 gels and the beans. The Sports Beans are AMAZING and I should probably only buy a packet at a time because they are basically like jelly beans, only better: less sugary and more juicy. I could eat those all damn day.

I felt like I had plenty of energy on the run, and never once felt sluggish or tired. Granted, I wasn’t running all that fast.

I drank a few sips of Nuun water every three miles, finishing the bottle with just a mile or two to go. I had one Gu at mile 5 and the other at mile 10. I popped a bean every so often (not at regular intervals, just when I felt like it).

I prefer the Nuun tablet in the water as opposed to Gu. I like Gu, but I prefer it on its own rather than diluted. I think it makes the water too sweet. 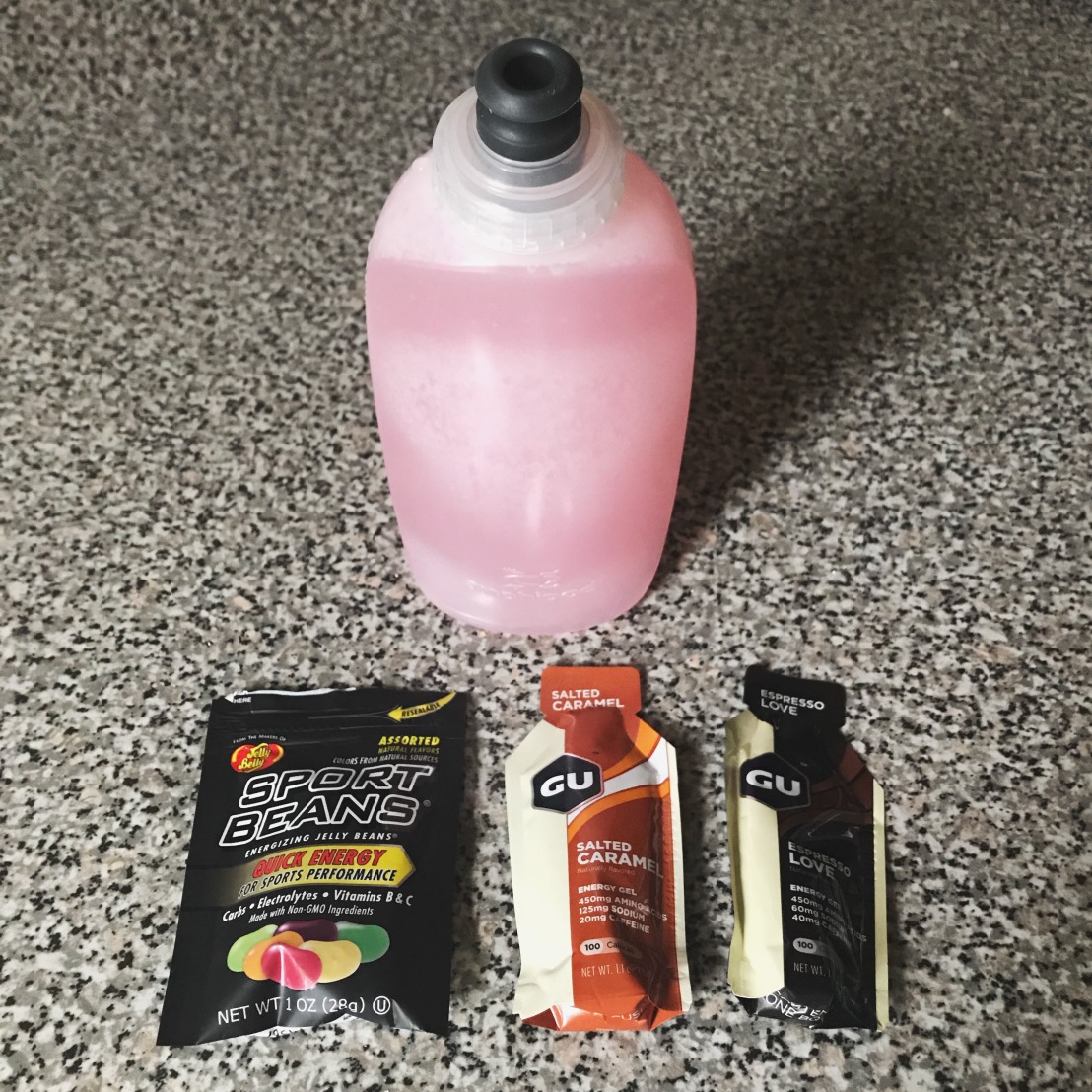 I think this did a good job of keeping me fueled throughout this long morning. Maybe I could have used a solid food as well, but I wasn’t necessarily craving one. Although I will say, I was starving by the time I ate lunch at noon.

I ate a very similar breakfast to last week, only this time I’ve started adding a tsp. of coconut oil to my coffee (I use Trader Joe’s organic virgin). It tastes so good and can’t believe I’d never tried this before. It’s also good with Chai tea!

This was my breakfast, minus the oat bran + egg:

During the run, instead of Gu this week I tried Picky Bars for the first time. I’d heard a lot about Picky Bars and saw them at my local supermarket so I figured what the heck. They were great! I had two flavors: Lauren’s Mega Nuts (Peanut Butter, Fruit & Honey) and Cookie Doughpness (Cinnamon, Raisins & Walnuts).

I ate each Picky Bar at mile 5 and mile 10, and took about a mile to eat each one.

To compare the two types of main fuel I’ve tried so far:

Verdict: I loved the Picky Bars. They were a nice compact size, not too crumbly or sticky, and easy to eat. I can’t be sure but the Picky Bars seemed to sustain me a bit more than Gu, although as evident from my run that day, it didn’t exactly result in faster paces. If I were to race with one, I’d be sure to open the package beforehand so I wasn’t fumbling with it on the run.

I didn’t do much different this week. I went back to Gu this week to see if two were enough for 17 miles if I also ate 3 pitted dates. Here’s what I brought with me for the run:

I’d tried bringing dates before and kind of liked being able to chew on something relatively easy and sweet, so I decided to try it again. I ate each Gu at mile 5 and mile 12, and ate the dates throughout mile 8.

Verdict: I was fine with this amount of food, although for 26.2 I probably need to bring a little more. I don’t think I’d want more than 3 gels in a run, so for the race I might combine the gels with one Picky Bar and maybe bring a few dates as well.

The main problem I’ve been having is that 16 oz. of fluid is only lasting me through 13 or 14 miles. This is with taking a few sips every three miles. So I’m either going to have to take fewer sips, sip less frequently, or just force myself to slow down a bit for water stops in the second half. I hate the idea of slowing down (as I think this affected my time in NYC) but I also don’t want to be dehydrated. And there’s no way in hell I’m carrying another 16 oz. bottle.

I’ve considered carrying my bottle in my belt as I’ve been doing but starting the race also holding a small water bottle in my hand to drink from first, and then getting rid of it after mile 6 or so. Not sure yet.

For my final long run of training, I decided to do one thing differently: not eat or take in any gels during the run. I would simply bring my Nuun water. I also decided to sip less to see how long I could make it last. I figured the run wasn’t that long and I wouldn’t be going too fast, so I wasn’t worried.

After my typical pre-run breakfast, this is all I brought with me for the 13 miles: 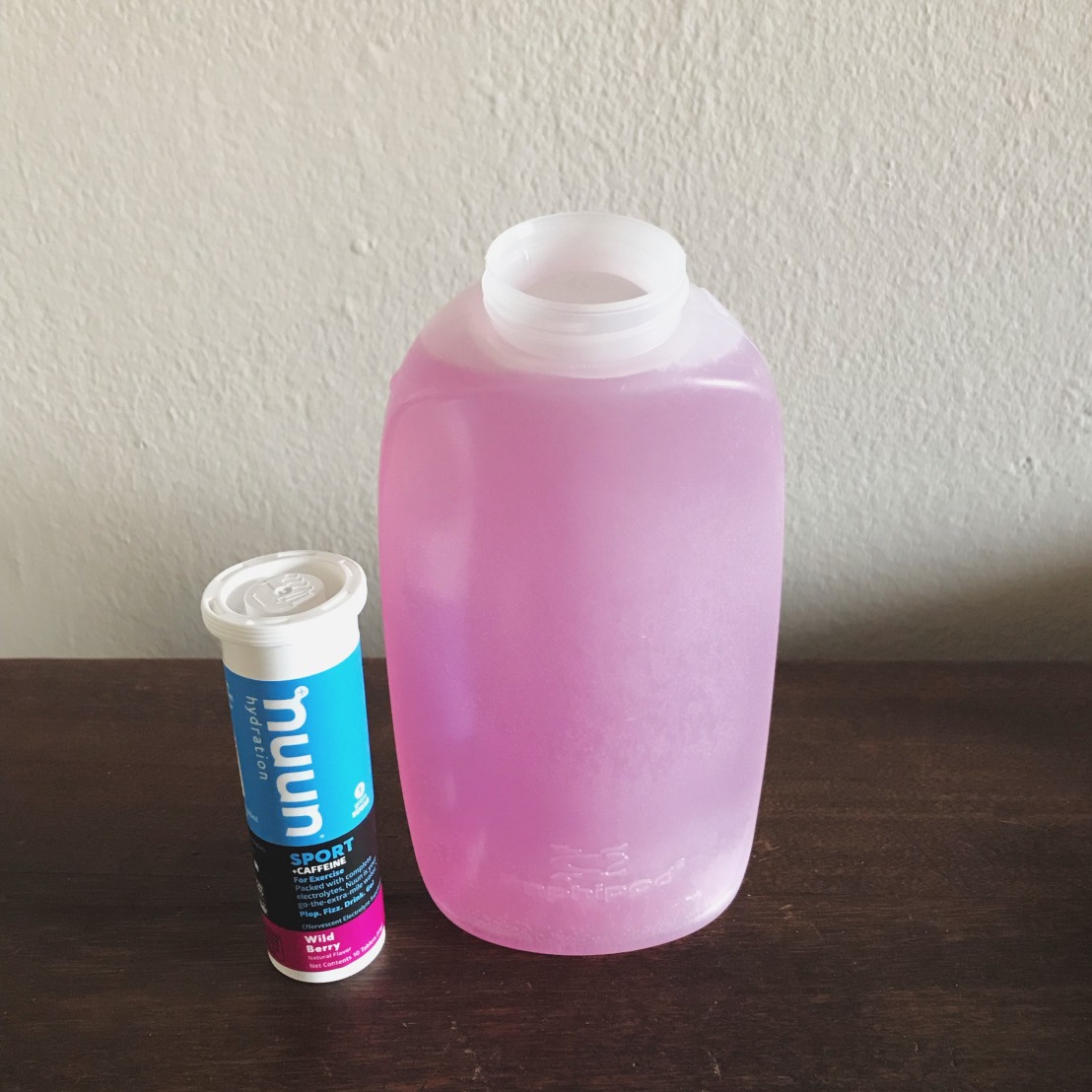 Normally I take 2 to 3 long sips of my Nuun water every three miles. Today, I decided to only take one long sip every three miles. I wanted to see how I did with less fueling than normal. And no Gu. I always assume I need a Gu every few miles. But would I?

I did exactly what I’d planned: took one long sip every three miles: one before the run, then at miles 3, 6, 9, and 12. I kept the pace easy but actually not as slow as I was supposed to, averaging a 9:58 instead of the prescribed 10:44 which honestly feels SO slow to me – I hope effort counts for something because this really did feel like a low effort run.

Verdict: I was thirsty. Not parched, but thirstier than I like to be for a long run. The one long sip was nice but I wanted more and I think in the end I would have needed more had this been a longer run. When I was finished with the 13 miles, I had taken in 7 oz. altogether. At this rate, starting with a 16 oz. bottle will get me through the entire marathon, but I need more than this. I think I’d also like to bring Gu with me for the race, but one every 5-6 miles should suffice.

So I think I’m going to have to start the race holding a small bottle, drink that first, then throw it away and drink from the bottle on my back. It’s either that or stop at fluid stations (where it’s just water and Gatorade), and I don’t want to have to slow down for those.

I ate way more than I normally do following the run, but maybe that’s because I ate so little during it.

Well, thanks for following along with me on this little fueling experiment journey. I can’t wait to see how it all goes on race day.