By the way, I am not a baker. I mean, I have baked. I will bake. But I don’t create recipes. I don’t know how. I still have to double check labels to see if I’m using baking soda or baking powder, and I always forget what either of them do or how they’re different. I know one container is square and one is circled shaped.

So that’s where I’m coming from.

But I want to learn! So I’m trying to make stuff following other people’s recipes. I started doing it more last year while my mom was alive. She always liked to have vegan chocolate chip cookies in the house and often bought them from Wild by Nature, a local (and somewhat pricey) supermarket that carries a lot of natural and organic products.

Eventually I thought I’d try to save her some money and make cookies myself. I found this recipe for vegan oatmeal cookies from Loving It Vegan and made them a bunch – adding chocolate chips, of course. They’re really good! For Christmas I wanted to make vegan gingerbread cookies and found a recipe on that same site, so I thought I’d try it.

I admit I did not follow this recipe exactly in that I did not make gingerbread men. I made gingerbread cookies. The reason for this was that I was short on time, did not have a gingerbread man cutout, and did not feel like going to the store to buy one.

I also baked these the night I left my wallet on the Long Island Rail Road. This was after I’d gotten home at 9pm and had already left a message with Lost & Found. I was basically sitting around, hoping for a phone call from LIRR that someone had found my wallet. It was excruciating. But I had to pass the time somehow, and I’d been meaning to get these cookies done that night. So I baked. (By the way, the lost wallet story has a happy ending.) 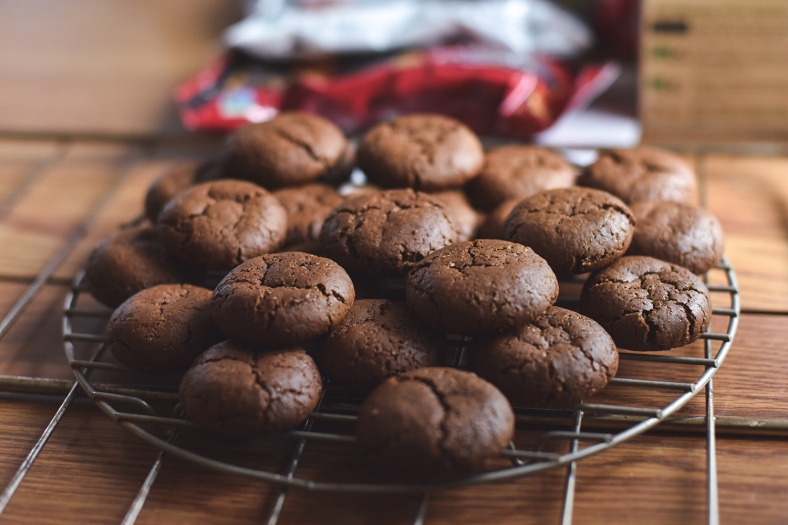 Here is the exact recipe on Loving It Vegan’s site. Since it’s not my own, I feel weird copying and pasting the entire thing, but I will list the ingredients:

I had all of these things except for allspice and ground cloves, so I just kind of ignored that part. I was pleasantly surprised to find molasses in the fridge – my mom must have bought it at some point and had hardly used it. Another reason I want to bake more: to use up all the ingredients my mom once purchased for various reasons – including what seems like 26 different kinds of flour. What the hell is tigernut flour? No idea! But I will use it!

I didn’t take a whole lot of pictures for this one, as I was stressed about a stranger having access to my driver’s license and credit cards, but I took a few.

Here are all of the wet ingredients in a bowl. My laptop is nearby so I could follow the recipe as well as constantly google “has anyone ever lost a wallet on the LIRR and gotten it back.”

And this is the same bowl after I emptied the wet ingredients into a bowl with the dry ingredients. I don’t know why I took a picture of this. Maybe because I was excited about licking it, or that I needed to be distracted from wondering what kinds of things a stranger was going to buy with the cash I’d just taken out of an ATM earlier that day.

After mixing everything together, I scooped the dough using a measuring tablespoon, rolled them into balls, and flattened them with the bottom of a 1/4 measuring cup. My hands got sticky during this process, but it was okay because it just gave me something else to lick (AFTER I had rolled all of them, calm down).

My poor wallet. I had been so careless. I’m never careless, until I am, and then it’s terrible. I stress-ate a lot of dough.

I wound up getting 29 cookies out of the batch (and that includes the dough I ate).

I wasn’t exactly sure how long to bake them because they were a different shape and thickness than the gingerbread men the recipe called for. I followed the instructions and baked them at 350º for about 15 minutes.

I could have made them more festive with sprinkles or rolled them in sugar (which hadn’t even occurred to me until Christmas Eve when I tried my sister’s delicious sugar-coated gingerbread cookies) but I opted to keep it simple. Also, I was very tired and wanted to go to bed and stop thinking about my wallet.

I think they came out pretty good! They had a little crunch on the outside, chewy on the inside, and a nice balance of molasses, ginger, and spices.

I would finally get news about my wallet the next day, when someone whose friend had found it contacted me via Facebook. I got it back that night. And now I had gingerbread cookies to give away – as well as eat. A win-win-win.

The products I used were:

Thanks to Loving It Vegan for the recipe!

If I make these again I think I’ll roll them in sugar before putting them in the oven to give them a little more sweetness. I will also never again leave my wallet on the Long Island Rail Road.