I’m going to start incorporating posts about food into this blog. Hooray! We all love food. I know I do! Case in point:

The thing is, I’m not really a cook. So what I’d like to do for the most part is just make other people’s recipes. I’ll write about the process, taking pictures along the way and sort of be a recipe reviewer? Or just a recipe maker? I’ll figure it out. Maybe I’ll eventually make my own stuff. But I’ll never post other’s recipes as my own. I’ll always include links and sources. I’m not an asshole.

Some people are natural cooks. My mother was one. 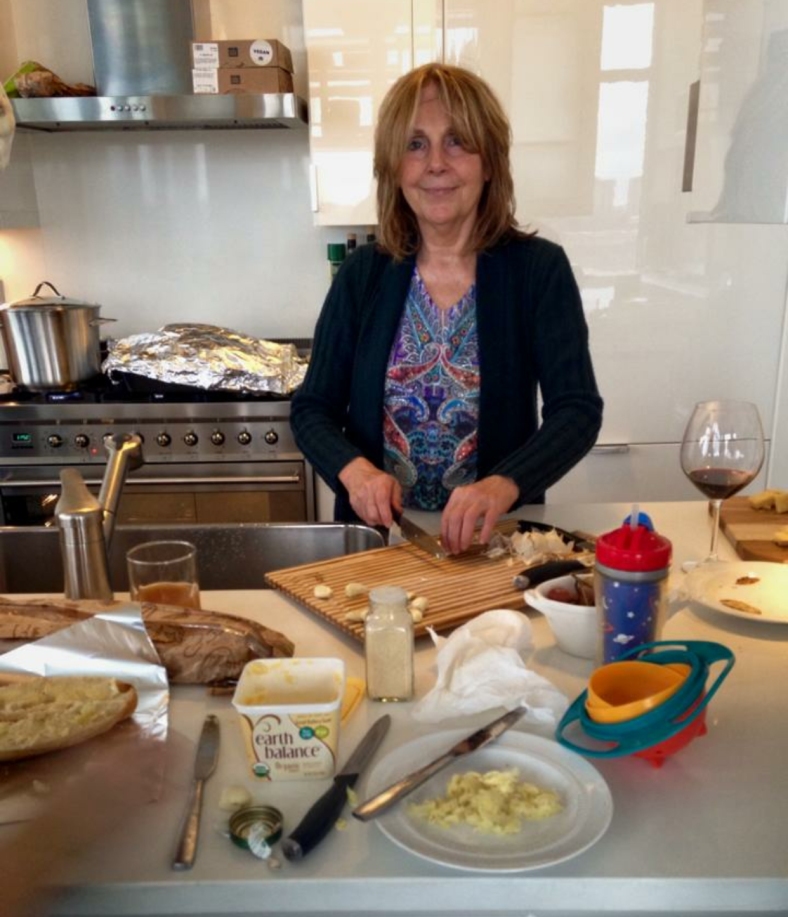 She made all sorts of things, from soups to baked ziti to stir-frys to salads, but her specialty was cookies and intricately-decorated birthday cakes – always baked from scratch. Never from a mix. I never saw her measure anything. She always said she didn’t need to. As an overly precise child who underlined my textbooks with pencil – using a ruler to ensure the line was straight (and if it wasn’t I’d erase it and start again) – I never understood this casual, seemingly disastrous approach to cooking. Then again, I’d never been much of a cook myself.

That is… [turns to camera, lowers sunglasses] until now.

For the first time ever, I decided to bake Christmas cookies this year and give them out as little gifts to some friends and co-workers. This seemed like a nice gesture that wouldn’t cost me much AND I would get to eat batter. A win-win.

At first I had fantasies of fashioning elaborate cookie tins with several varieties of fanciful pieces of edible art, but given my hectic schedule and lack of kitchen skills – and desire to keep things simple the first time around – I decided to just make four simple kinds. I’ll do a separate post about each one because otherwise this will be way too long and we’ll all get bored.

I was looking for a gluten-free recipe to accommodate some friends, and a friend of mine directed me to a online recipe that looked good. It’s from King Arthur Flour – ironic, given that these are called Flourless Peanut Butter Chocolate Chip Cookies. The picture on the site makes them look so good:

They must have been so fun to make the baker forgot to throw out a used eggshell, something normal people discard immediately. Wow! I had to try it myself.

First, I had to gather ALL of my Christmas cookie ingredients for a nice picture. Like a fun high school graduation group shot of friends before everyone goes off to their separate colleges. 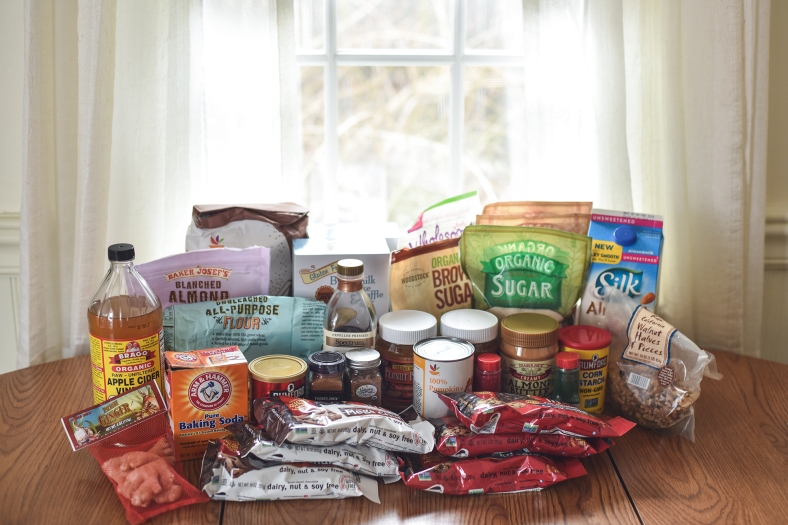 I should mention that this isn’t an ad, and any products I mention I’m only mentioning so I can share what I did. I’m not getting jack squat from any of this.

This recipe is super simple, with the only ingredients being peanut butter, brown sugar, eggs, chocolate chips, baking soda, vanilla extract, and salt. I wanted to make these vegan as well as gluten free, and I found out you can substitute pumpkin puree for egg. So I did that.

Oh, I was also quadrupling this recipe. I always forget how much math is involved when you do this. To complicate things even more, I like to save all of my recipes in myfitnesspal so I can access them later and also, obviously, keep track of the calories. So while I was quadrupling the ingredients for what I was making, I was inputting the recipe as written into the app so I could eventually divide it by the number of cookies in a batch so I would know the calorie count of each one. Thank goodness for calculators.

The quadrupled recipe called for 4 cups of peanut butter, which was two entire jars. I’ve been really liking Trader Joe’s for peanut butter (and almond butter, too) because it’s good, natural, and cheap! I scraped out as much as I could but still wound up with two jars coated with peanut butter on the inside. I hate wasting anything. 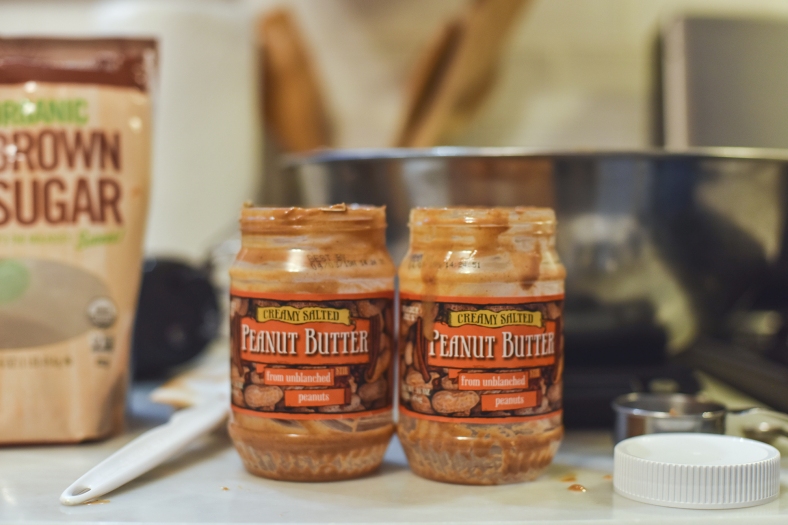 Then I remembered I had two dogs who LOVE peanut butter. 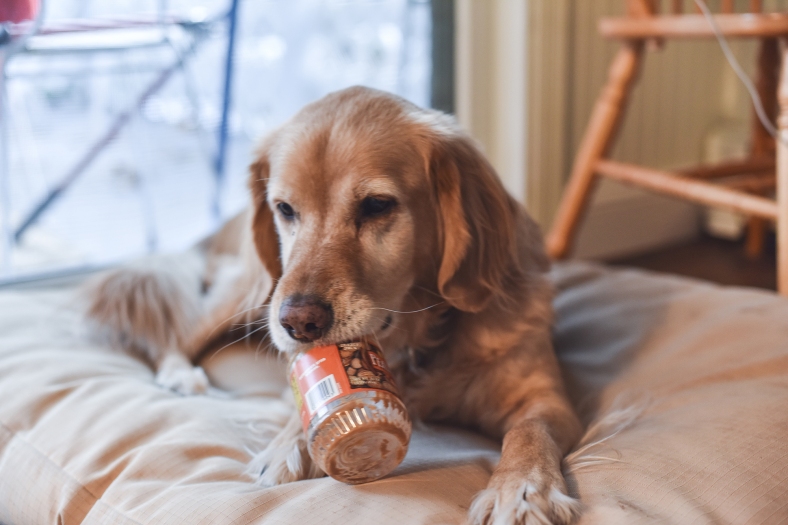 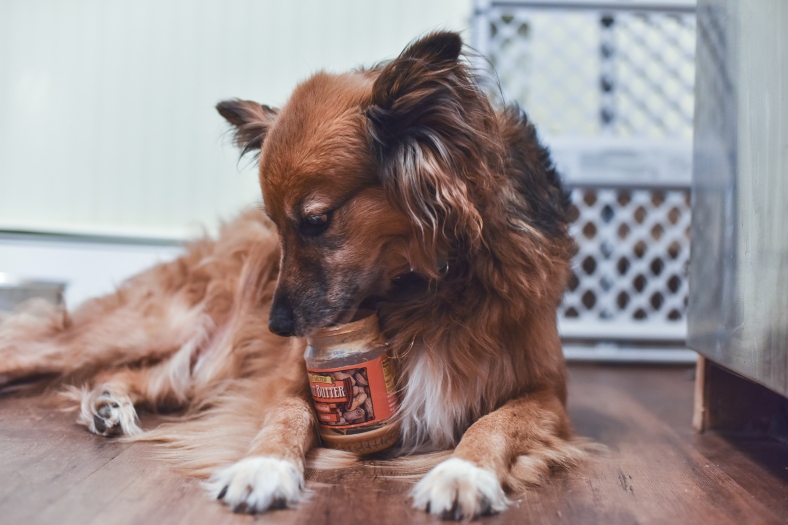 I AM SO NICE TO THEM.

Here’s everything in a bowl minus the chips. I love this color combination. It’s very “fall sweater.” 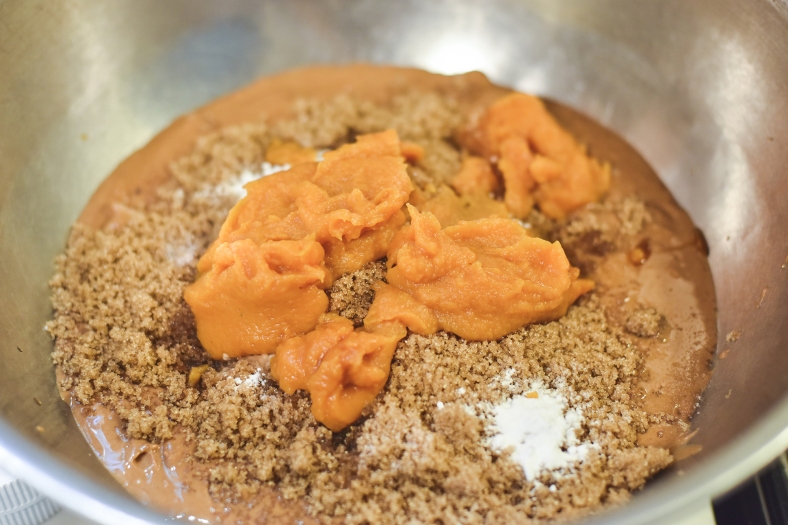 Mixing is always my favorite step. There’s just something so satisfying about using a hand mixer. I don’t know why. Maybe it’s the anticipation of licking the attachments.

Then came the ingredient that makes everything better: chocolate chips. These are non-dairy chocolate chips made by Enjoy Life. My mom used to always buy the mini version, I think mostly to snack on. 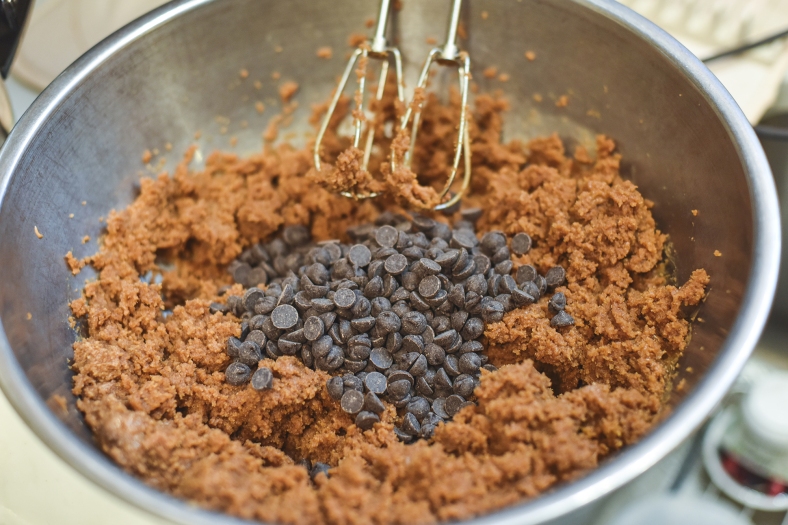 Finally, it was just a matter of forming them into balls. This is the most tedious, not fun part. Especially when you quadruple a recipe. As per the recipe, I used a measuring tablespoon to scoop the dough and then formed them into messy-looking lumps that resembled round shapes.

When I had 18 on each sheet, I flattened them with the bottom of a ¼ measuring cup.

They only had to bake for 8 to 10 minutes. I checked them at 8 and left them in for another minute. I probably didn’t need to, but they looked a little soft at 8 and I didn’t want them undercooked.

I linked to it above, but again here is the cookie recipe and instructions.

The recipe says it yields 18 cookies per batch, and even though I followed the instructions and used a tablespoon of dough per cookie, I came out with 26 cookies per batch – probably because my tablespoon scoops were a little under what they should have been. Your count might vary as well depending on how precise you are with the scooping.

The products I used were:

They turned out really good! I got a lot of compliments on these. Soft, chewy, and peanut buttery with just the right amount of chocolate chips. I know some people would say “you can never have too many chocolate chips” but I disagree – I think you can’t go overboard or else you ruin the cookie. Also, for anyone wondering, you don’t taste the pumpkin at all when subbing in pumpkin puree for eggs. They taste strictly like peanut butter cookies.

I wish I could have taken more and better pics, but it actually got dark out while I was baking and the light wasn’t very good. Sorry, natural light purists.

If you make these, let me know how they turn out! I plan on making another batch (or four???) this weekend.