Well, better late than never writing my week 15 training post. I am currently sitting at the end of week 16 so let’s get this one done and done. It’s been a busy week. I can’t believe I’m saying this, but I think I am ready to be done with marathon training. Luckily, as of this Sunday, I will be.

Here is what I did in the penultimate week in my 16-week training plan for the New Jersey Marathon! 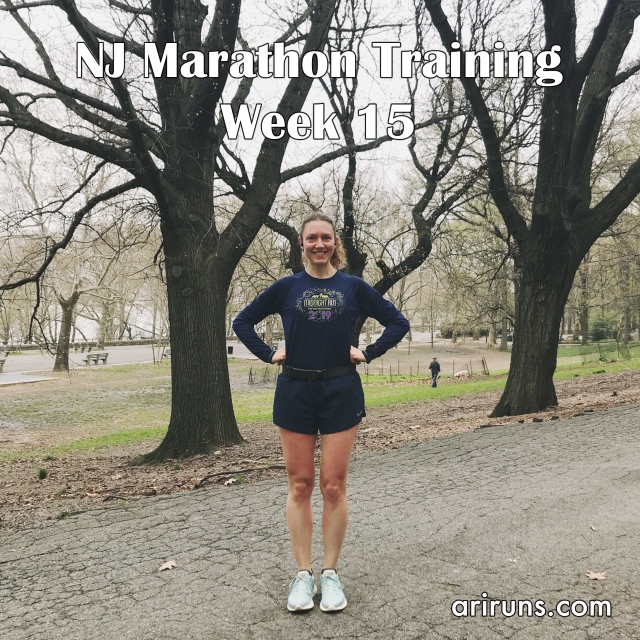 Monday was my day off from running and an upper body workout courtesy of Fitness Blender.

Wednesday was an easy 4 miles in Central Park. Just 40 minutes at 9:51 pace. I wanted to keep my week’s mileage to about 40, so 4 miles today was all I needed.

Friday I did not run, only did an upper body workout. I was tired and my right outer calf was just a little weird – not sore, but sometimes I could feel the bone crack in the same way you crack your knuckles? I’m not sure how to describe it. No pain, just a physical feeling. I felt this more when I walked, not so much when I ran, which I guess is a good sign. I figured I’d use this day in the taper to rest.

Saturday was the Run as One 4M in Central Park. I’m glad I rested the day before because I felt pretty good in this race, which I didn’t full out race but still put in a solid effort.

Sunday was my last long run: 13 miles. I’d meant to run super slow but ran at about a 9:58 pace (which is slow, but not super slow). This was a little over two hours of running. I felt good. No calf or toe issues.

The taper period is notoriously weird. As is common, I keep wondering if I’m doing enough. Am I running enough? Am I keeping up my fitness but not overdoing it? I had been on the fence as far as how my strength training should go. Normally I do two upper body and two lower body strength training sessions a week (sometimes one of the lower bodies is without any weights). I decided against using any weights with the lower body workouts in week 15. In week 16, I took it down even more (recap on that week very soon).

I ran just under my average weekly mileage this week. The 4 mile race was really the only hard thing I did. The tempo run was mildly challenging. The intervals workout wasn’t bad. Everything else was easy.

I think it’s more of a mental challenge during the taper. Physically, you’re scaling it back. All the hard work has been done. The running in the taper period is mostly to keep your muscles loose so it’s not a shock to the system on race day. But as race day has gotten closer, it’s been more present in my mind. It’s no longer a faraway, aspirational concept. It is a very real thing that is happening. Soon.

Probably the most noteworthy thing about this week is that I bought new running shoes! And socks!

Throughout this training period I’ve been alternating between the Saucony Guide ISO and Brooks Adrenaline GTS 19 for training and using Saucony Kinvara 9s for races and some of the faster workouts. The Brooks aren’t ready for retirement yet, but the Guides have 486 miles on them (yes, I keep very close track) and were starting to feel a bit flat. The Kinvaras only have 223 miles, and might be fine for race day… but I wanted a new pair. I’ll still wear the others from time to time.

I went to Jack Rabbit this time – it’s a running-focused store that has a treadmill, something the Super Runners Shops in NYC don’t seem to have. Honestly, I didn’t think it was super important to test them on a treadmill given that I was planning on buying the same models in the same size as before; I just feel better knowing I can test shoes in a store doing more than just walking five steps and jumping up and down in front of a mirror.

They had a new version of the Kinvaras, the Kinvara 10, and in a really nice solid muted green color I liked. These felt great. Maybe a little less squishy than my 9s, but I liked that. Light, and not too flat but not too cushiony.

I figured I’d get another pair of Guides while I was at it. These are the Guide ISO 2s, and I was happy to find a dark gray pair. The bright laces are fine. If my shoes have to have color, I prefer blues and greens. For some reason I stay the heck away from red. I don’t know why. It’s not you, red. It’s me. I just hate you. 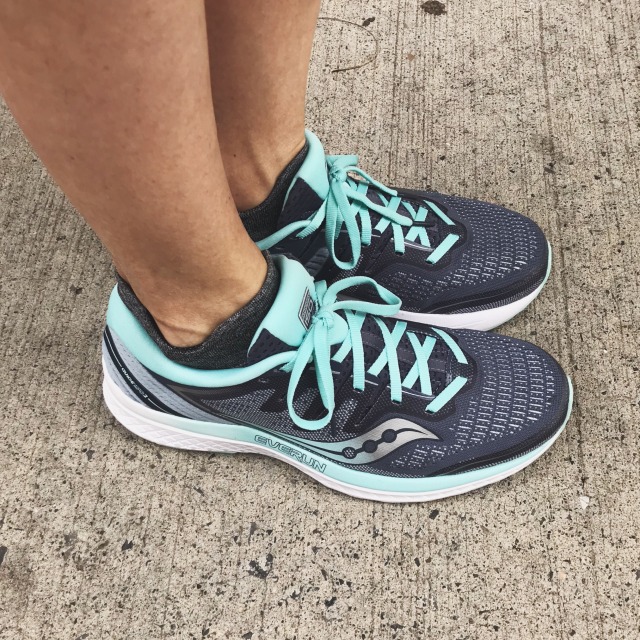 I also took the plunge and bought some new running socks. The Saucony socks I’ve been using for a while are great, but a few of them are starting to get holes in the big toe.

I thought thinner pairs for warmer weather might be nice. I got Feetures, which, according to their website, is “America’s #1 Running Sock.” Not sure how they determined that statistic but if it’s on the internet I will believe it! So far I really like them. Very lightweight. (They were also 20% off if you bought five pairs, which was good, because they also seem to be America’s Most Expensive Running Sock.)

One more wearable I want to mention: I’ve had the hardest time finding a running belt that stays around my hips. I do not like wearing them around my waist. And with wider hips, all of the belts I shove down to my hips just pop up to my waist during my runs and bounce around, which sucks very much.

I discovered Lickety Klips a few years ago while living in LA. Initially I bought one to wear over the buttons on my jeans, as is the product’s intention. 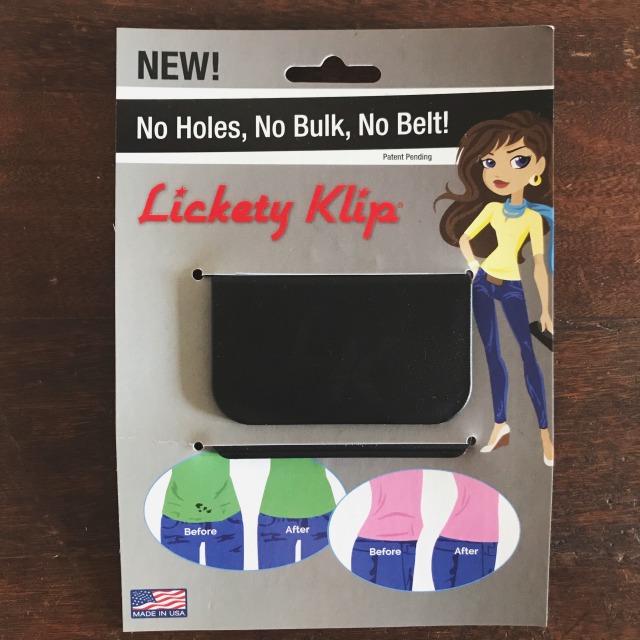 But I quickly realized don’t like how it looks worn over my jeans button. However, they make the PERFECT thing to make sure my belt stays attached to my shorts! I use one in front and two in back, and that baby stays put. I do have to tuck in my shirt, but that’s fine – I actually prefer how that looks, anyway. Neater. Like I’m going to work. Which I am.

By the way, nothing in this post is an ad. Ha, do you think I’m popular enough for ads? LOLLL.

The more I try to avoid people, the more I’m discovering parts of Central Park I never knew existed. Sometimes I can’t believe this all exists in the middle of NYC. p.s. MacGregor likes it too!
My son is very needy
What does a headshot photographer do when she can’t take pictures of people AND has a lot of time on her hands? Brand new website coming soon. 😁👍🎉🍌
Why I in jail. It’s for a picture, MacGregor. Hold on. What is picture. We’ve been through this, it’s an image taken with a camera. What is— All done, buddy. Let’s go have breakfast. I likes breakfast. I know, buddy.
I love you, Upper West Side 💚
We’ve been taking two 60-minute walks a day and then a 20-30 minute walk at night. A little more than we used to do, since the rest of my life lately is so sedentary, but so far he’s been able to handle it. If it’s hot, like it was yesterday, we take a little break and sit down. I bring a dog water bottle for him. He’s such a good boy. I don’t think I could ask for a better roommate to have during a global pandemic quarantine.

DO WHAT YOU CAN'T

running is my therapy

Running and Laughing through the Garden State

My thoughts around running 52 half marathons in 52 weeks.

Exploring the Works of Rod Serling

Running Commentary of a Dilettante's Life