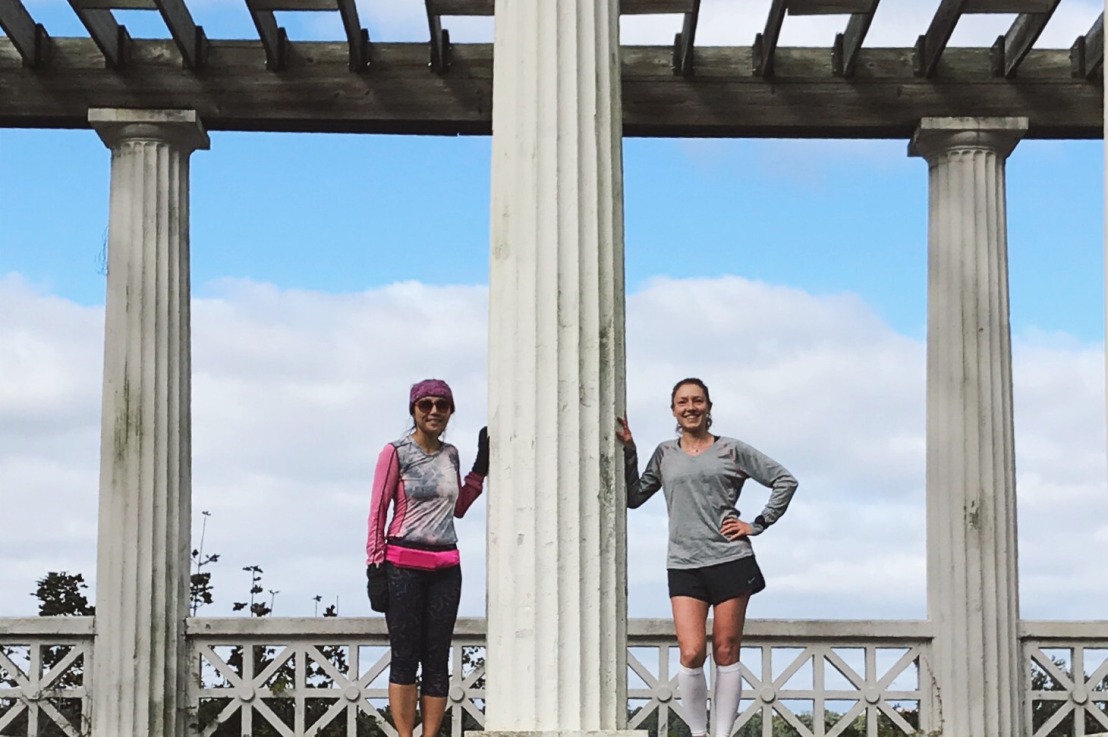 Week 14 of my 16-week NYRR Marathon Virtual Training Program was the first in my 3-week taper phase – meaning I could relax a bit. Just a bit. I had just completed a 22 mile run the Sunday of week 13, and was due for a couple days off this week. So this summary shouldn’t take long! I hope! Who am I kidding, I can’t be succinct for my life.

First of all, that New Balance waist belt thing I bought at the NYRR store and wore for my 22 miles on Sunday? I didn’t even realize this until the following morning, but it caused a cut in my back. Here’s a pic once it was healed a bit: 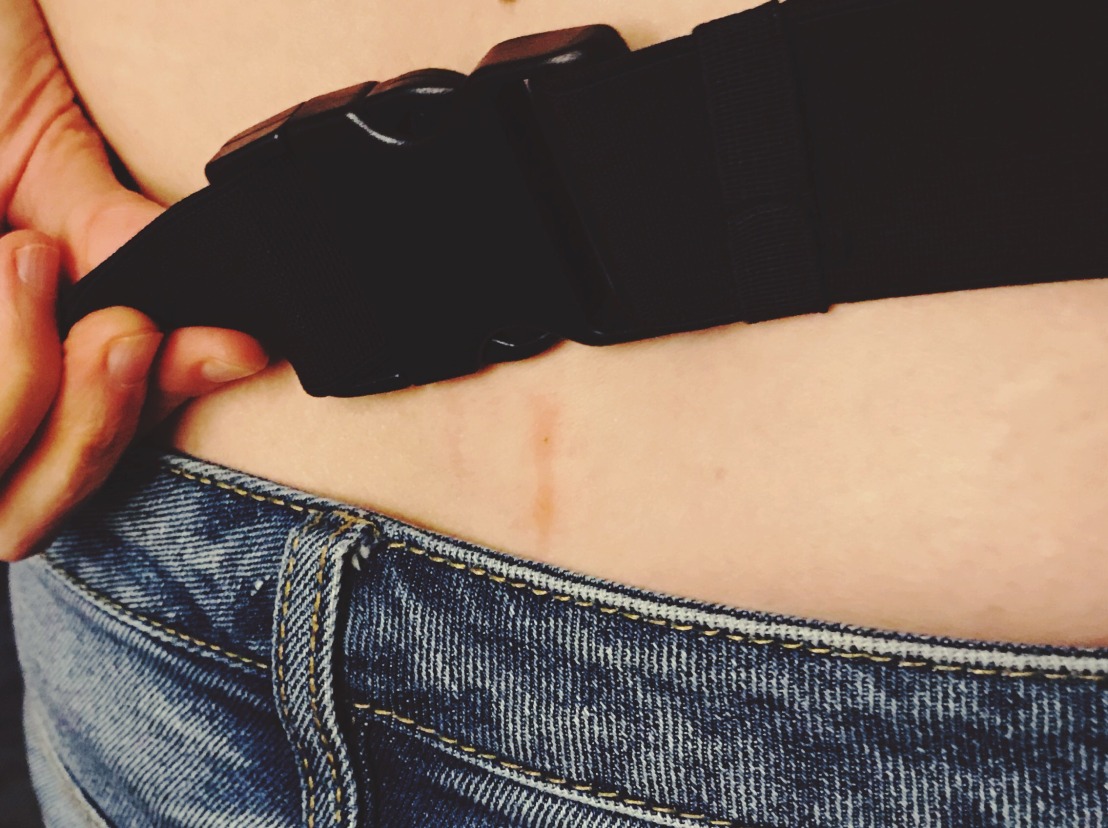 That was through a shirt.

This is why test runs are crucial! I’ll have to just cover this area of my skin with band-aids or something.

Monday I stayed off my legs as much as possible and did my usual Monday upper body workout courtesy of Fitness Blender. Plus crunches. I’ve been doing this workout for so long, I have it memorized and I don’t even feel it the next day. Which probably means I’m not really challenging myself?

Tuesday I took it even easier, doing only a 15 minute abs bootcamp workout. I work out every day and don’t typically do anything less than 30 minutes. But you know what? I wasn’t ready for anything big today, still wanting to rest my legs. So 15 minutes of ab stuff it was. Done and done.

Wednesday I was scheduled for a “Flex Day” with the choice to run 6 miles, cross-train, or have a day off. I wanted to run, but I really took stock of how I felt. And I didn’t want to run. Mentally, I was okay to. But physically, my outer right calf was, as I put it in my notes, “still a bit weird.” That 22 miler wasn’t easy and took a lot out of me. So I had another day of rest. Well, not total rest. I did a squats & deadlifts workout with 10 & 15 lb. weights. I know it seems counterproductive to want to rest my legs but then do a weighted lower body workout, but I’m not always the smartest cookie in the drawer.

Thursday I finally felt okay to run. I was prescribed an “Easy Run” of 8 miles. Just a year and a half ago, I would have thought “Jesus Christ, 8 miles? CAN I DO THAT?” and now I’m like “Cool, only 8 miles?” Looking back at my notes, apparently, “I FELT GREAT!” as that’s what I wrote for this run. So yeah, taking three days off was not a bad idea after all. I ran 8.05 miles in Central Park on the “easy/lightly moderate” side of effort, and wound up running a bit faster than I thought I would at an average 9:19 pace. Mile 6 was in 8:53. I was really surprised and happy with how I felt on this one. Amazing what a little rest can do.

Friday I was scheduled for another 8 miles at an “AYF” (as you feel) pace. Due to time constraints, I ran just 7, but figured I’d make up the extra mile the next day. I ran this again in Central Park and felt good with an overall 9:24 pace. Again, mile 6 slightly faster than 9:00 – if I start from my street corner and do the park loop counterclockwise, mile 6 is along that really flat stretch on the east side, hence the faster pace there. Both of these days had temps in the 40s. Summer is most definitely over. Thank goodness.

Saturday I had a prescribed 7 miles, but did 8 to make up for the day before. I realize at this point, it probably doesn’t matter whether I do 7 or 8, or 5 or 6, or run a 9:15 pace or a 9:45 pace. I’m just maintaining my fitness these last few weeks of training. Nothing I do will have that much of an impact on the race itself. The work has been done. “The hay is in the barn,” as I have heard more than a few times in the last couple of weeks.

For this run, I decided to challenge myself just a bit: I was prescribed a “Regular Run” (slightly faster than an Easy Run) but I really wanted to feel marathon pace again – and for more than a mile or two. So on the spur of the moment, somewhere in the first mile, I decided to do a tempo run: mile 1 easy, miles 2-7 at marathon pace, mile 8 easy. A marathon pace sandwich, if you will.

I ran up along the Hudson River Path for this one, toward the Little Red Lighthouse, although I didn’t quite make it all the way there as I turned around right at the 4 mile mark. Temps were in the mid 50s so I wore a t-shirt and shorts. It was also windy, which affected me way more on my way back down. I felt really strong on this run, with miles 2-7 at paces 8:47, 8:48, 8:42, 8:57, 8:33, and 8:56. The training program has been telling me from the beginning that my marathon pace is between 8:39 and 8:50. So I think I just about nailed it. Does it mean I can maintain these paces for 26.2 miles? I guess I’ll find out soon.

I felt really good about this run. I took a post-run pic because I don’t take many of those these days. Thumbs up for a nice, solid tempo effort. 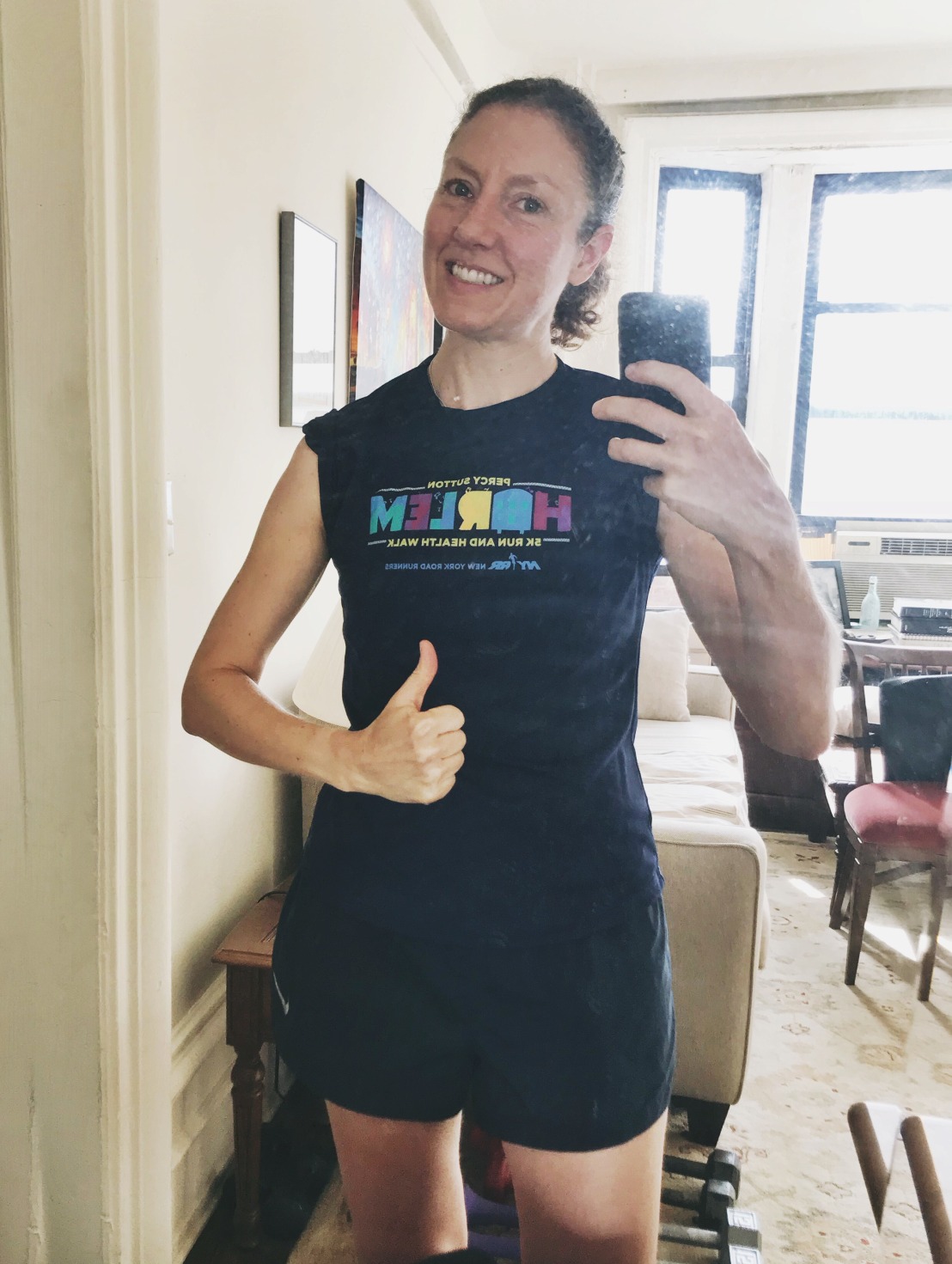 Sunday I had something fun and exciting planned! I’d gotten to know Elle (aka A Fast Paced Life) through her own running blog over the course of the past year, and after exchanging many comments and likes, we decided to actually meet in person and do a run together. She lives in NYC too so it seemed like a no-brainer.

I had 12 miles scheduled for this day – my “long run” for the week. (After 22 miles, I feel compelled to put quotes around “long run” when referring to any number less than that.) Elle had the idea to run up to the Bronx’s High Bridge. We’d play it by ear from there. After meeting at a local Starbucks on a brisk, mid 40s morning, we set off through Harlem. Or Spanish Harlem. Or Strivers’ Row. I wasn’t really sure where we were – we just decided to head north and east and hope for the best.

After running through many intersections, we made our way to the edge of the Harlem River. There was High Bridge right in front of us! Only… we weren’t sure how to actually get on it. It appeared the entrance was on the other side of the highway. Like, the side of the highway we were not on at the current moment.

No matter. We just ran under High Bridge and kept going north. Neither of us had ever run in this area, but we were sure we’d find our way back eventually. After all, Manhattan is an island. You can’t go too far in any direction without getting wet.

After a while, I saw a sign that read “10th Avenue.” That couldn’t be right. We were on the east side of Manhattan and 10th is on the west. But after stopping at a map on the side of the road, I was reminded of how narrow Manhattan is up this far north. Essentially, we were pretty much on the east side and the west side, simultaneously.

After running through a way-up-there neighborhood dotted with auto repair shops and bodegas, we made our way to the far west side and Inwood Park where there were a lot of people out for what looked like a long bike race around the city. We started making our way down the west side of the island. We only got sidetracked once, when around mile 8, as we were running along the water, we realized we couldn’t go any further – brush, dirt, and rocks completely blocked our path. So we turned around for another mile and crossed the West Side Highway to continue heading south.

We soon came upon the Grecian Temple, a structure I just learned was built in 1925. We decided this would be a good place for a pic, so we stopped for a couple of minutes. I took this by propping up my phone against the curb and using the self-timer. Technology FTW. 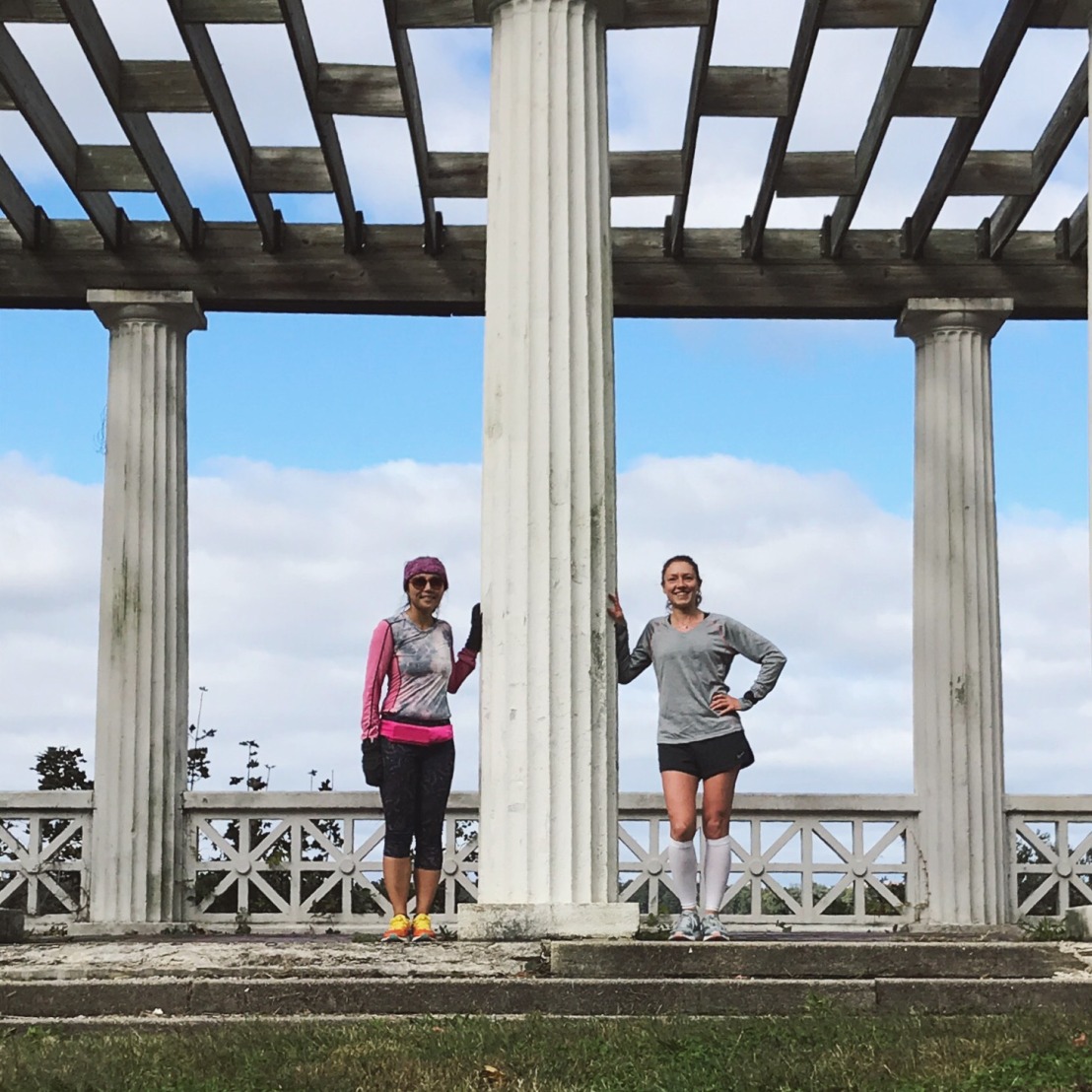 At some point I passed the 12 mile mark – my scheduled limit for the run – but I figured it didn’t really matter if I ran for another 20 minutes or so. (It didn’t.) After going up a super steep (at least that’s what it felt like at this point) hill, the road flattened out and we wound up not far from where we began. In fact, we stopped right outside the supermarket I frequent, and after we said goodbye I went inside to buy some food. We had run 14.4 miles. Overall we averaged a 9:21 pace, which is slightly faster than my long runs are supposed to be, but I didn’t really notice at all. It always felt comfortable enough to talk, so I know it was within a healthy range.

Since Elle and I hadn’t really planned the route we took, we talked about how interesting it would be to see the map of our route afterward. In fact, it was. Here it is: 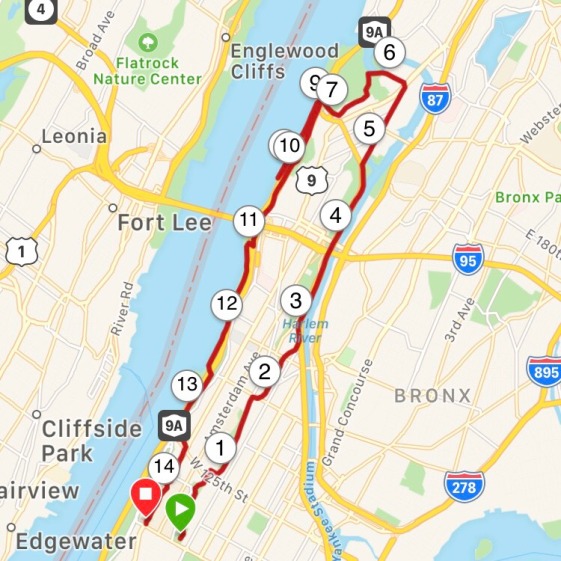 So that was Sunday!

It was fun to run with Elle, and I’m not just saying that because I know she’s going to read this. From what I’ve read about her races, she is just a bit faster than I am, so I appreciate her hanging back a bit to keep me company for two hours. Thanks, Elle! Let’s run again soon!

I had only been prescribed to run 35 miles this week, but I went just a little over. The next two weeks will be even less. Here’s to tapering!