How is it Friday already? How have I lived in the city for a whole seven days and not even posted about any of my first week’s runs (other than the inaugural one on Saturday night)? I am running the Brooklyn Half tomorrow morning and will have a LOT to write about (95% chance of rain!!!), so let’s do this.

SUNDAY: 13.01 mile long run. After Saturday night’s measly 2.47 miles in the rain, I was raring to go on Sunday morning. I couldn’t wait. I’ve done long runs in Central Park before – I even ran 13 miles there last January in my first half marathon – but this was my first “I live here now!” long run. Not my old “long run” I used to do when I lived in the city and occasionally ran in Central Park and did one loop (6 miles) around the park’s inner perimeter. Nope. My goal today was two loops. I am now a two-looper.

It was overcast and a little on the chilly side, but I wouldn’t have called it cold. So I wore shorts and the t-shirt I got at a 5K I did last summer. The shirt is huge on me, but it’s lightweight. Also, I figured if it started raining, the big sleeve could help protect my phone.

After a year and a half of running on the mostly empty streets of suburban Long Island, running through Central Park on a Sunday morning was a big change. There were so many people other than me running! How did they all have the same idea as me? How do they know about running, and want to do it at the same time I am doing it? Crazy. But it wasn’t all bad; it actually made me run faster. I don’t know if it was the competitive aspect of it, or the mini goal setting I did (i.e. seeing if I could catch up to the guy in the gray shirt), or just the excitement of running in a new place. My usual easy pace – which was what I was aiming for – falls somewhere between 9:15 and 9:30. I did the first 6 mile loop at a 9:08.

And then something weird happened: as I sped up to pass a cluster of runners, I decided to stick with that faster pace for a while. It almost felt like I got a second wind. And for the next seven miles – another whole loop around and then some – I kept my pace at an average of 8:34.

So it wound up being kind of like a tempo run, only the second half of the run was the fast tempo.

My only distraction throughout was that my Garmin battery was dying. I got three warnings at various points that I had a LOW BATTERY, and all I wanted was to be able to finish the run before it conked out completely. If it were to die, I knew I could calculate my overall average pace by doing some simple math based on where and when I finished. Luckily, the battery survived. But it had no juice left.

I felt really great on this run. Yes, the second half was harder, and I was glad to be done when I was, but I’m so happy I pushed myself. I’ve never pushed myself like that before on a long run. I know you’re not really supposed to go all out on your long runs, but I also want to listen to my body and be able to challenge myself every now and then.

MONDAY: I lifted weights in my apartment.

TUESDAY: 5.62 easy miles, 9:36 pace. This morning, I decided to run in Riverside Park. First, I walked the dogs, as I do every morning. I’m still getting up at 5am like I did when I lived on Long Island. I really love being up before most of the rest of the city. Especially when I can walk the dogs in an area that looks like this:

It was foggy out, which made for some great views of New Jersey: 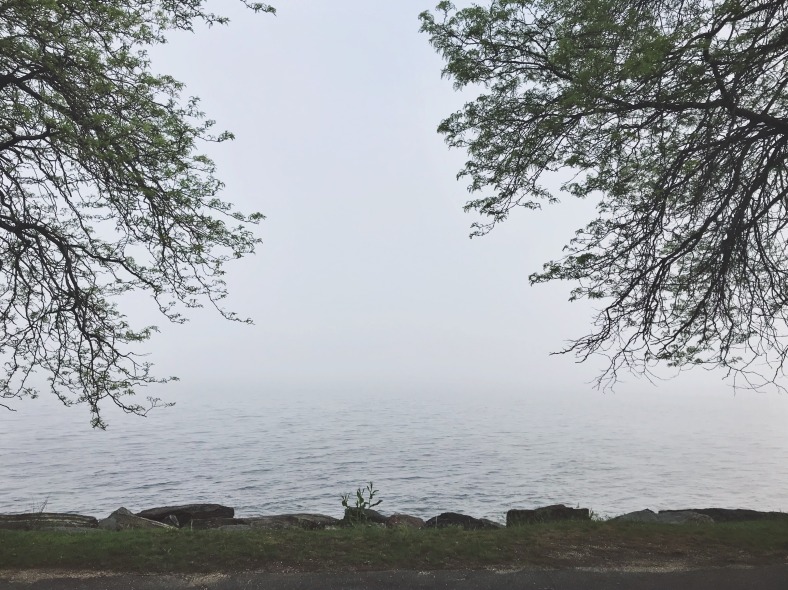 Riverside Park is long, but it’s also wide enough that there are several paths to run along. I decided to go right down by the water and run along a route called Cherry Walk.

By the time I got up to 129th Street, it felt like the path was getting too close to traffic, so I just turned around; I also didn’t want to run all that far. I was only expecting to do 5 or 6 miles.

When I got home, I was very sweaty. Here I am in my new kitchen. The light’s pretty good in there.

WEDNESDAY: 4.1 easy miles, 9:22 pace. Since I’m doing a half marathon this weekend, I wanted to taper a bit and do fewer miles as the week went on. So I aimed for about 4 miles today. This time, instead of heading north in Riverside, I went south for about 2 miles and then came back up again.

I wound up going faster than I had the day before, for two reasons: 1) I took off my running tank halfway through because it’s awkwardly big and was annoying me and I think I just automatically run faster when I’m not wearing a shirt, 2) it was raining so I wanted to get home sooner so I just ran faster. I didn’t even take any pictures because it was raining and I didn’t want to make my phone wetter than it had to be. But it was a good run. There’s something fun about running in the rain. I have a feeling this half marathon tomorrow is going to be VERY FUN.

THURSDAY: I lifted weights in my apartment. I still didn’t have internet at this point, so, like on Monday, I just did a Fitness Blender routine that I’ve pretty much memorized.

FRIDAY: There’s always this question of whether or not to run the day before a race. Today, I decided I would. Just 3 miles. Very easy. And a bit on the slow side for me: 9:47 pace. The first mile was super slow. I think because I had barely eaten. Anyway, it was a very easy, relaxed, get-the-kinks-out run.

I’m headed to bed soon, because I have to wake up in, uh, less than five hours to run a half marathon. I’ll let you know how that goes. I think it’s going to be a wet one. 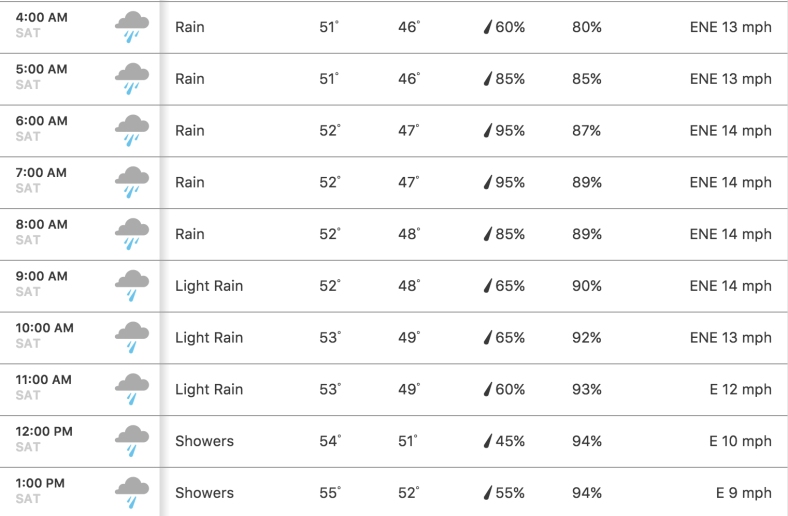 2 thoughts on “Welcome to New York: First Week of Runs”