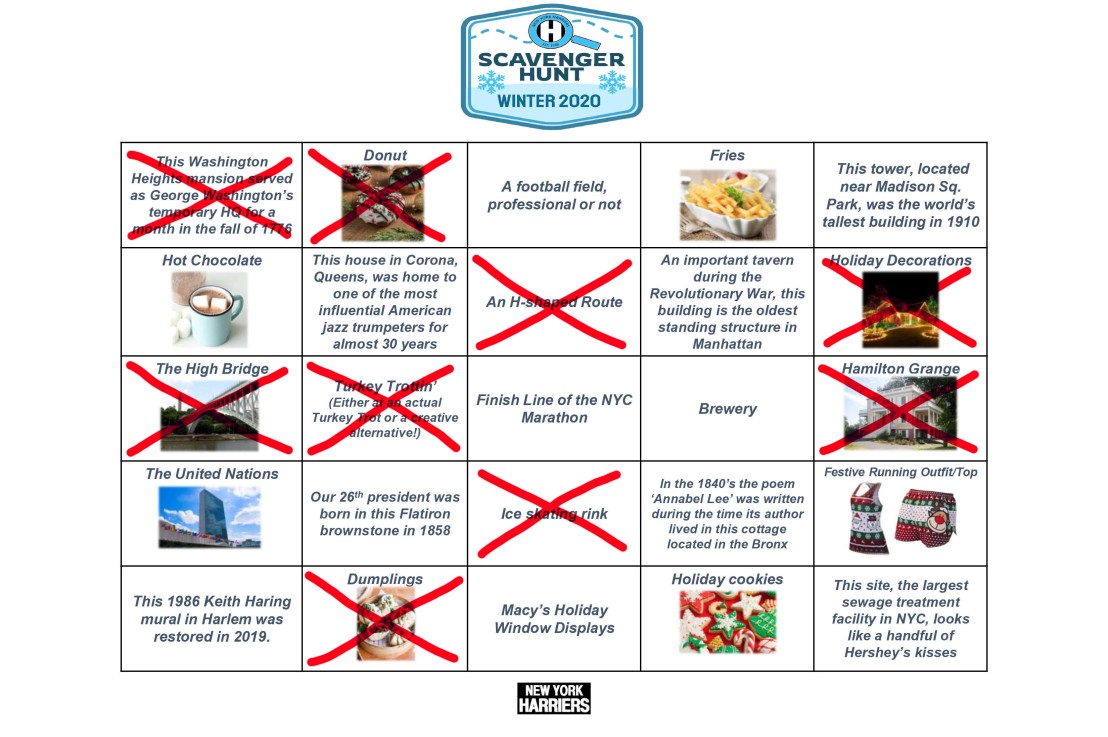 For my third New York Harriers winter scavenger hunt run, I kept it close to home. I also kept it easy. I chose not to explore any historical sites today and instead see how many simple things I could cram into one run, which I wanted to be in the 4-5 mile range.

One of the clues is “H-shaped route.” I decided that would be an easy one to achieve on the Manhattan grid. Why not make the entire run a big H and then end it with some food? It was a plan.

I spent a few minutes before the run looking at a map of the Upper West Side to determine how far south I should run: from 110th to 82nd, up again, 96th to Central Park West, down to 82nd, and back up to 110th would give me a little under 5 miles.

This was a nice and easy run and was even easier going down and up CPW as there were few intersections to interrupt my flow. Pro tip for Central Park West running: run along the lined space next to the bike route using the plastic poles as a barrier between you and the street.

The GPS was much more wonky on West End Avenue as opposed to along CPW – the more buildings, the more interference. Hence, my H’s scraggly left side.

I’ve been feeling pretty good on my runs lately, and these 4.66 miles flew by.

I chose to follow the “creative alternative” part of this clue as I sadly did not run an actual turkey trot this year. Instead, I wore the shirt I got from the last turkey trot I ran in 2018. That was the second year in a row I ran the Huntington 4-mile race on Thanksgiving Day, and to date is still the fastest I have ever run 4 miles.

Honestly, it was warm enough that I could have easily worn a tank top, but I figured the day after Thanksgiving was a good day to complete my Turkey Trottin’ clue.

These two clues go together because I bought them together at my favorite local supermarket and also ate them together. Well, not at the same time. But one right after the other. Guess which one I ate first? If you guessed dumplings, you’re wrong.

Maybe they’re not from a fancy dumplings shop, but you know what? Maria makes some good homemade dumplings. And I don’t know where Westside Market gets their bakery donuts but the glazed donut I ate was one of the best donuts I’ve ever had.

This was a pretty easy scavenger hunt run, and perhaps I didn’t learn any historic facts about New York City this time. That’s okay. I had a donut and dumplings for lunch.