And now, for something completely normal.

If you read my last post, you’ll learn that there have been times during the past month I’ve wanted to write in this blog. One of those things was a recap of the Washington Heights Salsa, Blues, and Shamrocks 5K that took place on Sunday, March 1, 2020, which was exactly seven and a half years ago (or does it just feel like that??). Now that every race is being cancelled in the coming months (and, I am predicting, for the remainder of 2020), I might as well write this recap because who knows when the next one will be (2021, if we’re lucky).

Please know I’m aware we are currently experiencing the most difficult/surreal/terrible time period in the last several hundred years. (Maybe the Middle Ages bubonic plague was almost worse?) But I will recap this race as I have all others. Some things have to feel normal right now, even if nothing is.

There are two significant NYRR 5Ks in northern Manhattan: this, and the Percy Sutton 5K, held in August. Sometimes I get them confused in my mind. They’re both north of my apartment. Both courses head north and then back down south along the same road. Percy Sutton has more twists and turns and possibly more hills? The Washington Heights 5K is an out-and-back, looping through hilly Fort Tryon Park before making its way back down. I like out-and-backs because you get to see runners coming the other way: inspired by the runners you see on the way out, happy to be ahead of the ones on the way back.

The hills in this race aren’t anything crazy. For a well-trained runner, they are nothing that would derail a race. For a runner who hasn’t been training as well as she would have liked to, and who may not be in peak physical form – for example, me – the hills can be daunting and exhausting.

At this time last year I was in the thick of training for the NJ Marathon and it had been going really well. I felt great. This year, I’d been plagued by plantar fasciitis since September which was making running harder than it should’ve been. Yes, it’s still going on. Some days are better than others, but no matter how much or how little I run or how much I ice or massage or stretch or pray to the foot gods, it’s still there. I’ve become resigned to it. This is my life now.

So that’s where I was.

I forget exactly what I ate that morning but it was probably oatmeal topped with a fried egg, plus coffee. It was very cold out that morning, that I remember. Like, 20s ºF cold. I decided to race in a tank and shorts anyway. The more I race, the less I want to wear. I wore sweats for the jog up and because I knew I’d be going directly to brunch after and didn’t want to freeze my buns off.

I ran the entire three miles from my apartment to the start. Last year I took the subway. That was my plan this year, figuring I’d warm up at the start, but when I got down to the subway I saw that the next train would be arriving in 20 minutes, which in the NYC subway system might as well be four hours. I was worried about time, didn’t want to pay for a cab, and figured I could jog up there in less time it would take me to get there by train. So that’s what I did.

I got up there in 30 minutes, stripped off my sweats, checked my bag, and felt surprisingly not freezing – partly due to the sun and partly because I think my body is numb before races. I never notice the cold no matter the temps or how little I wear. Maybe my brain is too focused on the task at hand to care about silly things like comfort.

Most runners were dressed warmly.

I’d dyed my hair red the night before. I’d also purchased a white Harriers tank, our crazy alternative to black that some members wear sometimes. I thought I could use a little change. If only I knew just how much change was in store for me later that month, hoo boy.

One thing I knew about the 2019 race is that I ran the first mile too slow (7:54). This year, I wasn’t sure I could beat my overall time from the year before, but I knew I could run the first mile faster. That was my main goal. From there, I would just, you know, keep running. If I PR’d, great. If I didn’t, fine.

I give credit to NYRR for making proper adjustments this year to runners’ “best pace” and placing them in the correct corrals. I think one of the things that slowed me down in the first mile last year was all the weaving around people I had to do at the start, when people who shouldn’t be in the corral were there anyway. This year, there was much less weaving. I think runners are finally starting where they should be. (I’m still in corral D. My pace puts me closer to C than E, but it’s going to take a bit of work to move up.)

The first mile had some flat terrain, a few small hills, and some nice crowd support. And, good news, I ran it faster than last year.

In the beginning of mile 2 there’s a nice, easy downhill. I sped up. I didn’t want to look at my watch more than once a mile. So when it buzzed after mile 1, I saw 7:23 and thought “cool” and told myself I wouldn’t look for another mile.

I felt good in the first part of mile 2, certain I was going somewhere close to 7:00 pace. We reached the loop of Fort Tryon Park, where there are a few uphills. I don’t remember them being so massively difficult last year. This year, they felt hard. I definitely slowed here, as I’m sure most runners do going uphill, but I felt like I slowed more than everyone else. So that was disappointing. Still, with the downhill section, I was confident I had run mile 2 close to my pace for mile 1.

When my watch buzzed again, I looked at it, expecting to see something similar to 7:23.

I was pretty sure I wasn’t going to PR at this point because I definitely felt more tired this year. In fact, the uphill leading out of the park was SO DAMN HARD. Oh my god. My legs. They just. Did not go.

I did my best in the third mile, noting just how much harder the uphills felt this year. I remember feeling powerful last year. This year felt like a slog. On the plus side, it was cool to see some of the Harriers on the side of the road holding a sign and cheering for us. I half-heartedly waved as I ran by. I just kept thinking “last mile, last mile.” I really wanted to be done. Luckily, the major hills were over.

So yes, miles two and three were nothing like last year. I just lost steam. I did manage to pick it up for the final stretch, but again, not as much as I had last year.

Whew! Glad that was over. Official finish time: 23:54. Only 23 seconds slower than last year. Considering everything? Fine. I’ll take it.

So while it wasn’t a complete shitshow, my race this year felt more sluggish than last year’s. I didn’t feel as strong. The hills were harder. My legs felt heavier. These things happen.

I know I don’t necessarily need to compare every race to ones I’ve run before, but it’s always interesting to me. It gives me stuff to work on. How is my strength training this year compared to last year’s? How’s my nutrition? Could I be getting more sleep? What can I improve and what is in my control? Sometimes it’s fun to try to figure these things out.

After I stopped and got my complimentary apple (eaten right away) and bagel (tossed in my bag for later consumption), I asked a nice man to take my photo. You can never have enough post-race photos, especially when your limbs are so red from the cold you can’t even feel them. 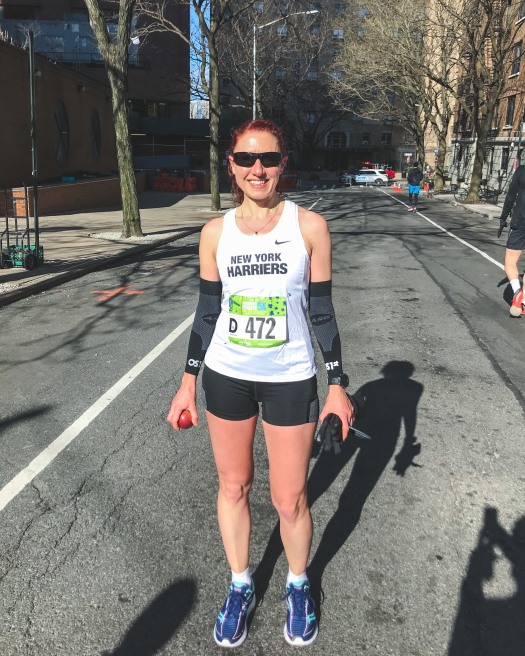 Here’s a cool little thing: I’ve been working on upping my cadence, something that probably deserves its own post at some point. While I’ve been training to specific songs with specific beats per minute, I chose not to listen to those songs for this race but instead listen to whatever I wanted and trust that my legs knew what to do.

That little green blob in the middle of this year’s graph is the very hard uphill coming out of Fort Tryon Park where I felt like dying. Other than that, a solid improvement in cadence.

After the race, I walked (wearing my sweats again) with some team members to a great restaurant called Le Chéile (pronounced “leh kay-lah” not “luh shee-elle” like I have been pronouncing it in my head this whole time). It’s always nice to hang out with my Harrier friends after races. I was so hungry. I ordered an omelette, toast, and potatoes and ate every bite. 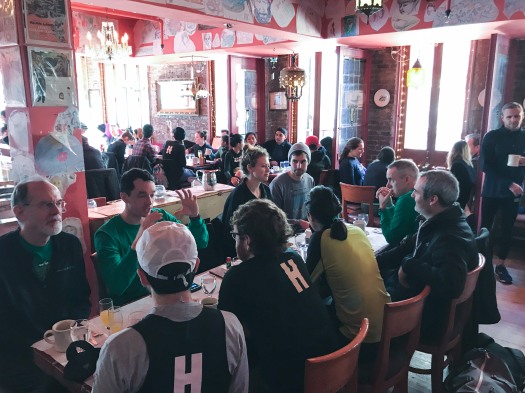 I was proud to have scored points for the team, placing third for the Masters women. Here I am with the women who placed second and first, Margaret and Mirjam (also the Harriers president and vice-president).

By the way, I am the new team treasurer. Not sure if I’ve mentioned that on this here blog. Which basically means I get to handle the team gear and money, as well as be on the Board, which is cool! I’m proud to have the role.

So this was a nice way to start – and most likely end – my 2020 race season! I ran as best as I could, still improved over the times I ran a couple of years ago, had a nice brunch with friends, scored points for the team, and mostly was lucky to be in a place where my health and body allowed me to run at all. I am grateful for that, too. I never want to take that for granted.

It’s still strange to look at these pictures and realize how different life was only seven weeks ago. Seven weeks. Life felt normal. Everything seemed fine. Some distant chatter about a faraway virus, but nothing too out of the ordinary. Little did we know.

Until the next race, whenever that may be.

BONUS: here is the race recap I wrote for the Harriers blog all about the team! 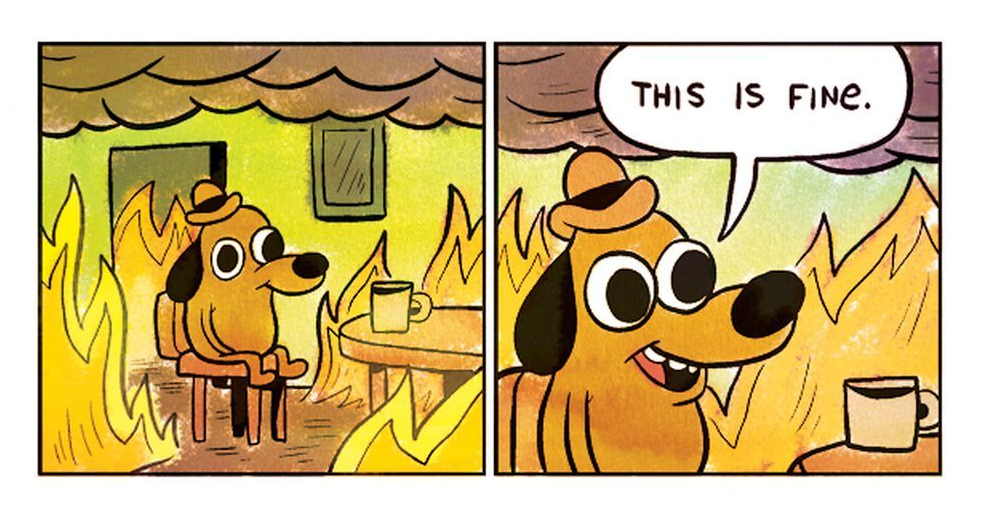