Week 6 in my marathon training was during a hot and humid week in August. I was feeling run-down and borderline sick throughout the week, but ended on a fairly good note. I started running with a washcloth to mop up my sweat. At this point I haven’t worn a shirt on a run in well over a month.

As I wrote in week 5’s post and will probably repeat a version of each week:

I am following the 17-week marathon training plan of my awesome running club the New York Harriers. Their plans are only available to members and, although I’ll be writing about my training here, please know that my plan is specific to me and wouldn’t necessarily work for everyone. I have my own estimated weekly mileage goals, and I’m choosing how many miles to run before and after my speed/tempo workouts and on my easy days – a lot of that depends on how I’m feeling that day. Every runner is different and every plan should be different, too.

Monday: Yoga (Yoga with Adriene: Hips & Hamstrings & Yoga for Runners)
I was really tired today but did two yoga routines that seem good for runners. I was still coughing up phlegm after a week and wondering if I needed antibiotics. I took an hour and a half nap in the afternoon. I also took a food sensitivity test I’d ordered months ago – I wonder if I’m low on iron or something.

Tuesday: EZ (7.1 miles @ 10:08 pace) /// Upper body strength (Fitness Blender: Bored Easily)
The first two miles were a slog but I managed to pick it up a bit in the last five. Sometimes it takes me a few miles to feel good.

Wednesday: Intervals (7.85 miles w/ 13 x 400 @ 5KP-ish) /// Lower body strength (Fitness Blender: Body Weight Butt & Thigh)
I was happy to run this morning’s Harriers workout with a couple of others, and it helped – especially when I’m using my watch to time it and calling out when to start each interval. Can’t slow down if I’m in charge. Thirteen quarter mile repeats around Central Park, including Harlem and Cat Hills. It was tough. But we did it.

Thursday: Yoga (Yoga with Adriene: Abs, Arms & Attitude & 6-Minute Yoga for Hips) /// Upper body strength (Fitness Blender: Get Strong)
I decided to start running five days a week instead of six. A lot of other Harriers do this, and they are all faster than me so I can’t imagine it will hurt. If anything, I think it might help alleviate some of my fatigue. So I did a bunch of yoga and upper body strength training today. I’ll see how this schedule goes.

Friday: Hill Repeats (7.9 miles w/ 3 x Harlem Hill clockwise) /// Lower body strength (Fitness Blender: Squats & Deadlifts)
Everyone’s favorite: hill repeats! I ran this with the Harriers but really I ran by myself because I was the slowest one out there. Which is fine. I ran the uppermost hill clockwise three times – the entire length of the up and down portion faster, and then the 102nd Street transverse at a jog. This was hard, I’m not going to lie. My breathing has been labored a lot and I wonder if I’m going too fast for my lungs or if it’s something I can control better and I’m just… not?

Saturday: EZ (3 miles @ 9:52 pace)
I felt run-down and tired today. When I woke up my throat had that possibly-on-the-verge-of-getting-sick feeling. I was worried I was getting a real cold. I was all ready to run at 7 am and then I did something I don’t do often: I lay down on my bed for an hour. I fell asleep again. I finally ran at 9:30 but by then I was out of energy. And it was very humid. I called it after three miles. It just wasn’t my day.

Sunday: Long Run (16.89 miles w/ 9M easy, 8 x 4 min. @ MP)
This was tough. The humidity was 91% this morning. Ninety-one percent is basically the same as one billion percent. See the above pic for what I looked like about 14 miles in. I was supposed to do 19, half of which had marathon pace intervals. I wound up running 9 miles @ 10:19 pace and then 7.43 miles with 8 x 4 min. (about half a mile) at MP (or thereabouts) with 5 min. recovery jogs. I nailed the first six intervals, dragged on the last two. I ran mostly on Central Park’s reservoir and bridle paths. My shoes and lower legs were caked in dirt by the end. Running home, I was so tired I was hobbling at 14:00 min/mile (no joke) until I thought “Wait, what am I doing, this isn’t even running,” so I just stopped. Still, almost 17 miles with six solid MP intervals isn’t bad. And I’m not sick after all. 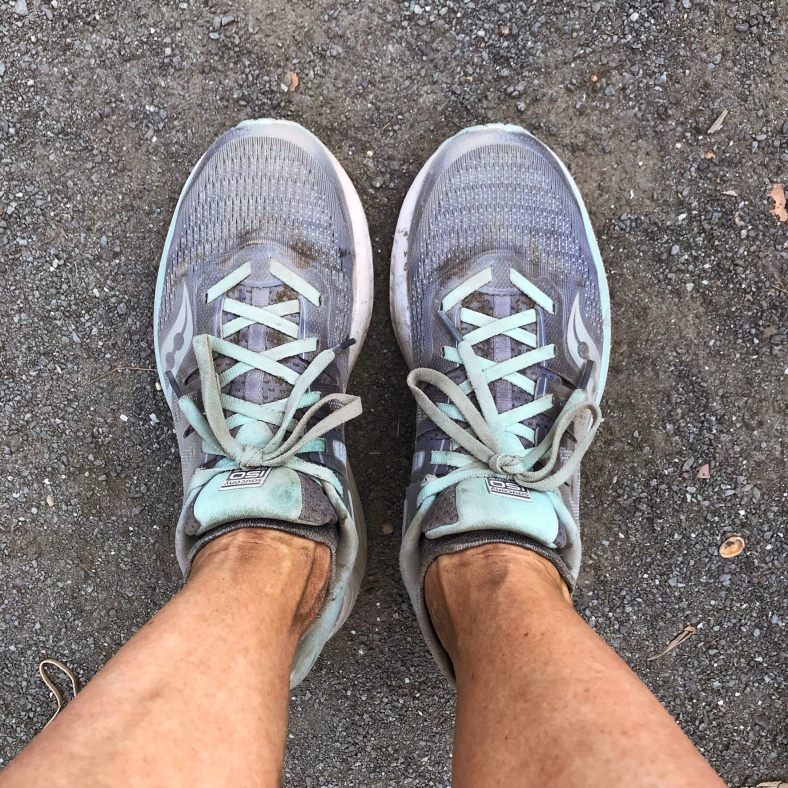 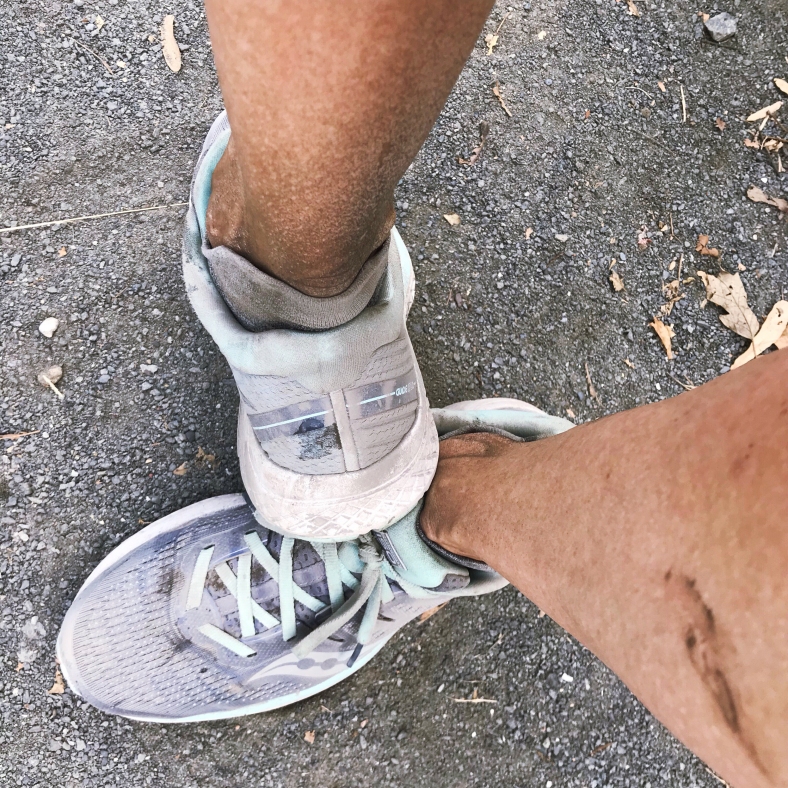