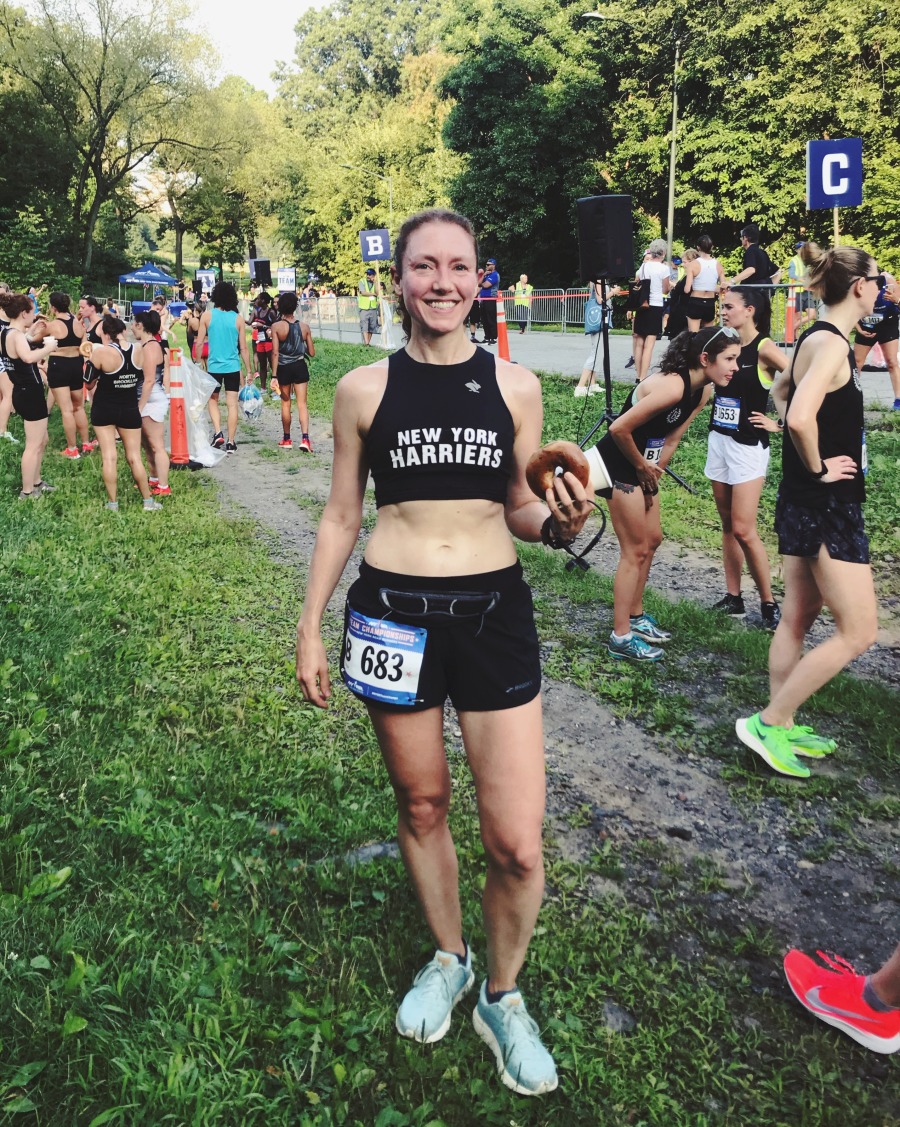 Still getting caught up over here! I have never been this far behind on my blog and, frankly, I am somewhat embarrassed. But I must finish what I start, so here is my brief recap of the very fun 2019 NYRR Team Championships race that happened back on July 27th!

This was my first Team Champs. I’ve been a member of the New York Harriers since June 2018, and while I was eligible to run this race last year, I’d caught a bug a week earlier and wasn’t feeling my best. Also, at the time, I was under the mistaken impression that you had to be super fast in order to run it. I didn’t understand how the points system worked – I truly thought that NYRR just took the finishing time average of all runners to determine the “best” team, and I was worried I might drag my team down with my sloth-ness. So I didn’t run the race last year, but I did attend our post-race team picnic.

This year, I understand how math works so I was excited to bib up. This 5-mile race is one of the fastest in NYC – the only participants allowed to run it are members of local running clubs registered with NYRR, and members of running clubs tend to be fast. I was not expecting to top my age group or anything, just do my best and have some fun.

The only other 5-mile race I’d ever run was the Pride Run in June, where I did… not so great. So anything faster than my 41:25 would be a victory in my book. I was hoping for somewhere between 37:00 and 39:00. Mostly, I was looking forward to the post-race picnic because I love food very much.

One thing I love about Team Champs is that the women and men run separately: this year, the women at 7:00 am and the men at 8:15 am. This means that runners from each team can cheer on their teammates. It’s also just fun running with all ladies. As with the Mini 10K, it’s nothing against the gents, I just appreciate a less congested course and extra spectators.

There were only five corrals for this race: A through E. I was in B, which was cool because I’m usually in D, and although I know Team Champs B is equal to Normal Race D, it was fun wearing a bib with a B on it. There were a few Harriers in B.

I was also excited to wear my new Harriers crop top! It showed off my lovely and extremely white torso. (It has actually become more tan as of the time of this writing, but not by much.) 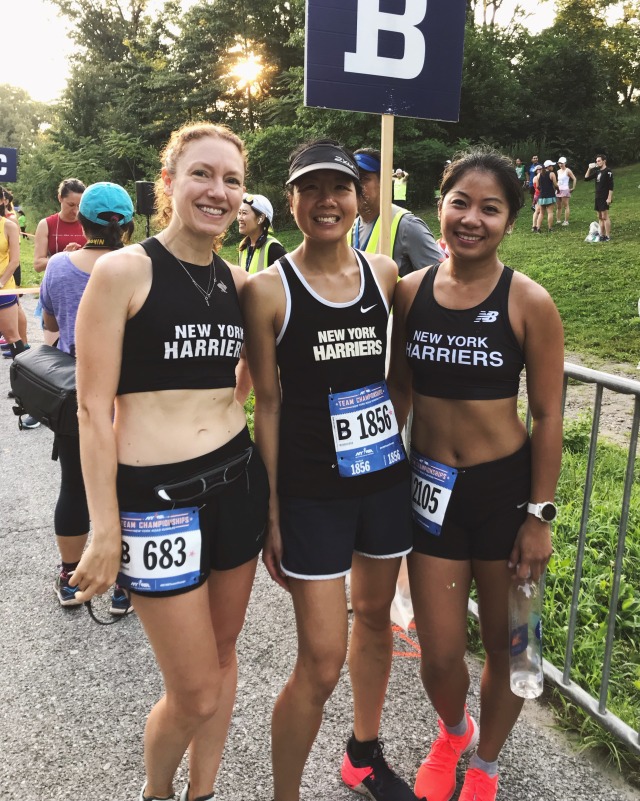 It was warm, but lower-than-normal humidity this day, which was a pleasant break. I actually felt good. And I had remembered to hydrate.

I also loved that the start was up at the 102nd Street transverse in Central Park. This is only a mile away from where I live. No subways required! I just jogged over as my warm up.

The course was 5 miles, counterclockwise around the loop and avoiding the northern Harlem Hill, thank the lord. It was a little congested at first, as always is the case when a race begins on a transverse, but I made it through okay. After all, I was toward the front, in corral B. Have I mentioned that?

I would have loved to stick to about a 7:30 pace for the whole 5 miles. I honestly didn’t think I was there yet in terms of my ability, but I wanted to at least try and see what happened.

Mile 1 took us up the first of the Three Sisters hills. Normally, this hill feels kind of brutal in a race, but since it was the first mile, I managed to get up it in pretty good time. I felt good. I felt strong.

The second mile was more of the same. Another uphill, another downhill. I was pushing it but not horribly. Not like it was a 5K. God, I hate 5Ks. There, I said it. I hate them! But a 5 mile? Okay, I can at least breathe a little. I was still working hard, but feeling like maybe I could keep this pace up?

By the third mile, I felt some fading. This mile was fairly flat and you’d think that would have helped, but it actually made it a little harder. The middle of a race is tough, mentally – you’re a little worn out by now and you know you still have halfway to go. I think my brain got in the way here. Physically, I might have been able to keep pushing but that cautious voice took over here. Be careful. Don’t blow all your energy now.

So I lost a little momentum there. Maybe I would have been able to make it up a bit in mile 4, but mile 4 contained Cat Hill. Freaking Cat Hill. I don’t really love cats, and I especially don’t like hills named after them when they come mile 4 in a 5 mile race. I tried. I really did. It was so hard.

With one mile left and no more hills, I was feeling tired but in a better headspace. One mile left. One mile? I can do that! Also, I knew the Harrier dudes would be waiting on the side of the road in this mile. So many NYRR running club members were standing along this mile, as most of them have picnics afterward on the lawn on the east side of the park. They were all cheering everyone on – especially their own teammates – and the atmosphere was so fun. I was hoping that seeing the Harriers would give me a boost.

I’m happy to say it did! My legs became infused with a surge of energy when I passed them and I felt as though I was running my fastest stretch of the race. Of course, I faded a bit after I passed them, but still ran as hard as I could to the finish.

Holy smokes. How the hell did I pull off a 7:18 mile? Thanks, Harrier dudes.

Of course, according to my Garmin I ran an extra 0.04 miles because I can never, ever run the exact distance of a course.

Whew! What a rush. I still couldn’t believe that last mile. I regretted slowing in mile 3. I blame my brain. Dumb brain. 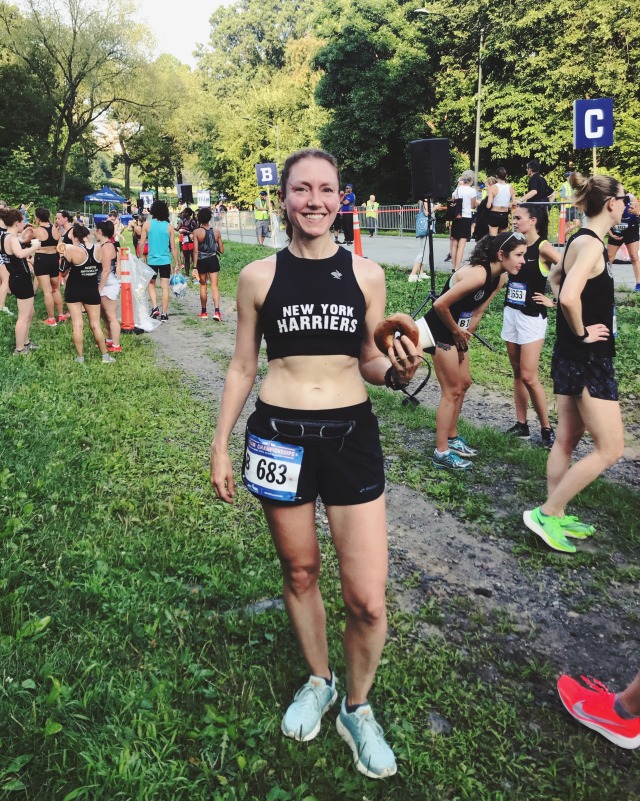 I picked up my cinnamon raisin bagel for later consumption, stuck it in this nifty little carrying case, and headed home to shower and grab my dog MacGregor before heading back out to the Harriers picnic.

The Harriers picnic did not disappoint. So much food. I ate way too much of it. I brought homemade vegan muffins (there are vegan members of the team and I wanted to make sure they got fed) and I wasn’t so sure how good they were, but people seemed to like them, so that was good.

Needless to say, MacGregor was the star of the picnic. At least, I’m pretty sure he thinks he was.

I wound up running an overall pace of 7:46 for a time of 38:50 – slightly slower than I’d wanted to, but realistically, about where I should have ended up. I even scored points for our women’s Masters team, always a plus. Overall, I was happy with my race, even if I think I could have run mile 3 faster. Mile 4, I’m not so sure. Freaking Cat Hill.

We took our annual group pic (featuring MacGregor and Chomper) and celebrated another Team Champs race.

DO WHAT YOU CAN'T

running is my therapy

Running and Laughing through the Garden State

My thoughts around running 52 half marathons in 52 weeks.

Exploring the Works of Rod Serling

Running Commentary of a Dilettante's Life