In this post, I’m going to take a close look at the two 26.2-mile races I’ve run in my very short life as a marathon runner: the 2018 TCS NYC Marathon and the 2019 Novo Nordisk New Jersey Marathon. I’m kind of a numbers nerd, and I thought this could be a fun way of comparing the two training cycles and races – examining what I did better, what I could still do better, and how luck and life circumstances played a role. Let’s have some fun! Or maybe it’ll just be me who has fun!

First, there are two good reasons for both my PR and BQ worth mentioning:

It’s important to mention these things because they don’t pertain to everyone and I don’t want to make it seem like the PR/BQ was some kind of crazy miracle. My specific circumstances helped make it happen.

There are a bunch of reasons why the NJ Marathon went better. First, my training. I trained better and I rested better. This was all helped by the fact that I did not have a full time job while training for NJ (I’ve been freelancing as a photographer), while I did have a full time day job (10am-7pm, M-F) while training for NYC. This was very much a factor in a better training cycle: I had more time to train and more time to sleep.

Here’s an interesting look at some of the numbers in the two training cycles. I made this chart all by myself in Microsoft Word using my favorite font of late, Futura: 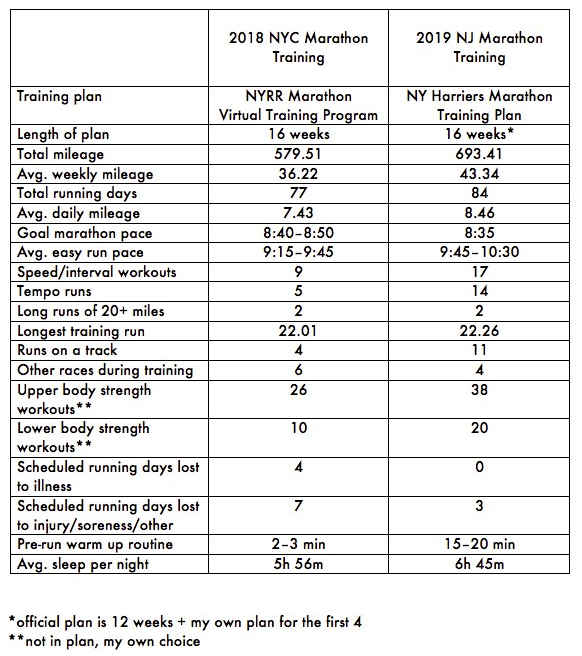 As a result of probably all of those things, I was injured/sore way less often this time. I never wore my calf sleeves once! I also never got sick at all, thank the lord. 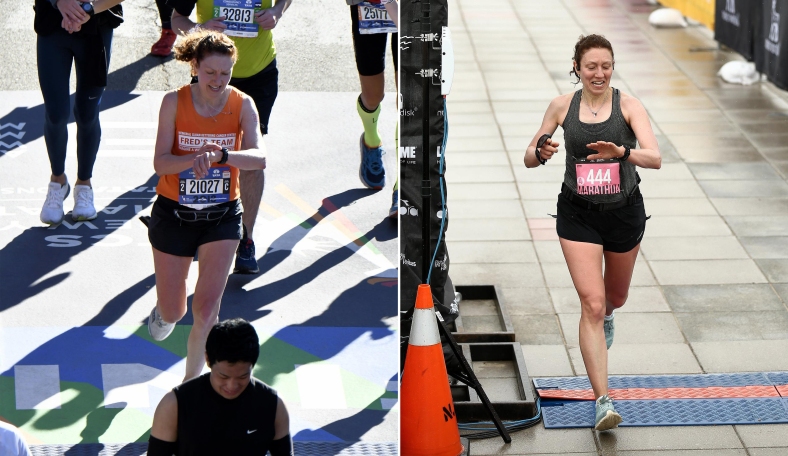 There were some major and minor differences in how each race compared – not only from a performance standpoint but terrain, elevation, and more. Let’s analyze this to death, shall we? 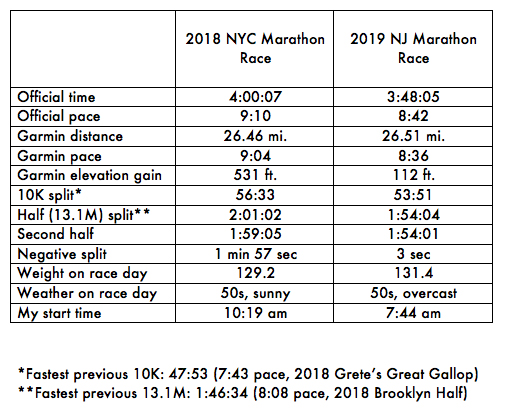 Starting with the obvious: from NYC to NJ, I improved my time by 12 minutes 2 seconds and my pace by 28 seconds a mile.

In both races, my “official” pace (based on when I crossed the timing mats) differed from my average pace showing on my Garmin. This is because I wound up running more than 26.2 miles in each race: 0.26 miles more in NYC and 0.31 miles more in NJ. As much as I tried to take inner curves and run straight tangents, I clearly did just as bad a job of it both times. And I guess natural GPS fluctuations played a part as well.

Knowing that this happened in NYC, I wish I had run NJ with a slightly faster goal pace on my Garmin. Either that or plugged in a 26.5 mile race into my “predicted finish time” field so that it would assume I was running a longer race. Or, do what I should have done and used Race Screen’s GPS correcting function at each timing mat, something I will test in races this summer before running NYC again this fall.

I included my fastest 10K and half efforts as an addendum mainly to show how far off I was in NYC from my best times. Obviously, you’re going to run the first half of a marathon slower than a half marathon race, but 15 minutes slower? Seeing those numbers now, I honestly can’t believe how much I held back in NYC. I was so afraid of burning out – much more than I needed to be.

NJ is a very flat course. The 112 ft. of elevation recorded by my Garmin was due to a few small bridges on the course, but nothing at all like NYC’s Verrazzano or Queensboro bridges. For NYC, you really have to prepare for those bigger hills and know your pace will probably slow on them. In NJ, you just have to focus on being consistent, as there’s not much to break up your pace other than some right angle turns.

Speaking of being consistent, I was surprised to see my half splits in NJ were almost identical: only three seconds separated my first and second halves! I hadn’t meant to do this – if anything, I’d wanted to significantly speed up in the second half. At least by more than three seconds. Still, I’m pretty happy about the consistency with my pace. The only real difference is that in the first two thirds I was fighting to slow down and in the last third I was fighting to speed up.

Another interesting thing about my NJ results: at the 10K mark, I was in 1083rd place. By the finish, I was in 810th place. And I was pretty much running the same pace the whole time. It looks like 36 people may have dropped out by the finish, but this still means that a lot of people had slowed down throughout the race. Sometimes I forget that you can pass people on a race course without even speeding up – they just have to slow down, and voila: you’ve passed them.

I also included my weight (the insignificant 2 lb. gain), the weather (nearly identical start time temps, just sunnier in NYC), and race start time. That last one was a pretty big difference: I’m used to starting my runs around 7:30 or 8:00 am, so the NJ start felt a lot more natural to me. Starting a 26.2 mile run at 10 in the morning, on the other hand? Much less so. Unfortunately, that’s what it is in NYC, unless I ever start with the elites, and even then it’s 9:10 am. (Also, I will never start with the elites.)

I’m not sure which was worse: having over two hours from arriving at the start village until I crossed the start (NYC) or having less than 45 minutes between the two (NJ). I guess NYC was the much more relaxed start given how much time we had to sit around. But planning breakfast and snacks is a little harder. While the NJ start village was hectic and hurried, the timing of when I ate everything that morning felt better.

Finally, here’s a fun little graph comparison showing the differences in my pace range in the two races: NYC on the left, NJ on the right. I had to do a bit of manipulating in Photoshop to get the corresponding paces to line up and to better show the comparison. Look at how much more consistent my pace was in NJ:

Because you can never have too many graphs, here’s another version of the same thing below. Again, I manipulated the size of the graphs to have them better compare and placed red lines between the corresponding paces. The one huge dip in NYC was the Queensboro Bridge because all signal was lost there – I wasn’t actually running a 13:00 pace. Maybe more like 9:45-10:00 at the slowest, but I’ll never know. All I remember is that a bird shat on my arm on that bridge.

In NJ, the slight dip and spike in mile 5 were when I stopped to put my phone away and then sped up to make up for it. You can also see how I faltered a bit between miles 20-22 and then tried so hard to come back, finally speeding up at the very end.

Finally, I just felt so much more confident running NJ. Not only did I already know what running 26.2 (or 26.4, I guess) miles felt like, I had a solid block of training behind me. I had run several marathon pace tempo runs. I had practiced fueling, hydration, and so much more. I just felt better in every single way.

Knowing what I now know, I can’t wait to see how training goes this summer for the 2019 NYC Marathon. I can’t yet make any kind of prediction as to how fast I can run it, but I’m looking to improve my time. I’m not sure I can take off another 12 minutes, but who knows. After all, I am now a qualified marathon expert.