Week 6 of my training for the New Jersey Marathon is in the books! Well, spreadsheet. And now it will be on the blog. This was a solid week – one of my highest mileage weeks ever. I am still feeling strong, healthy, and haven’t had any issues with soreness or calf aches the way I did while training for NYC.

I think I’m doing a lot of things right/better this time around! I’ll write about that more below. 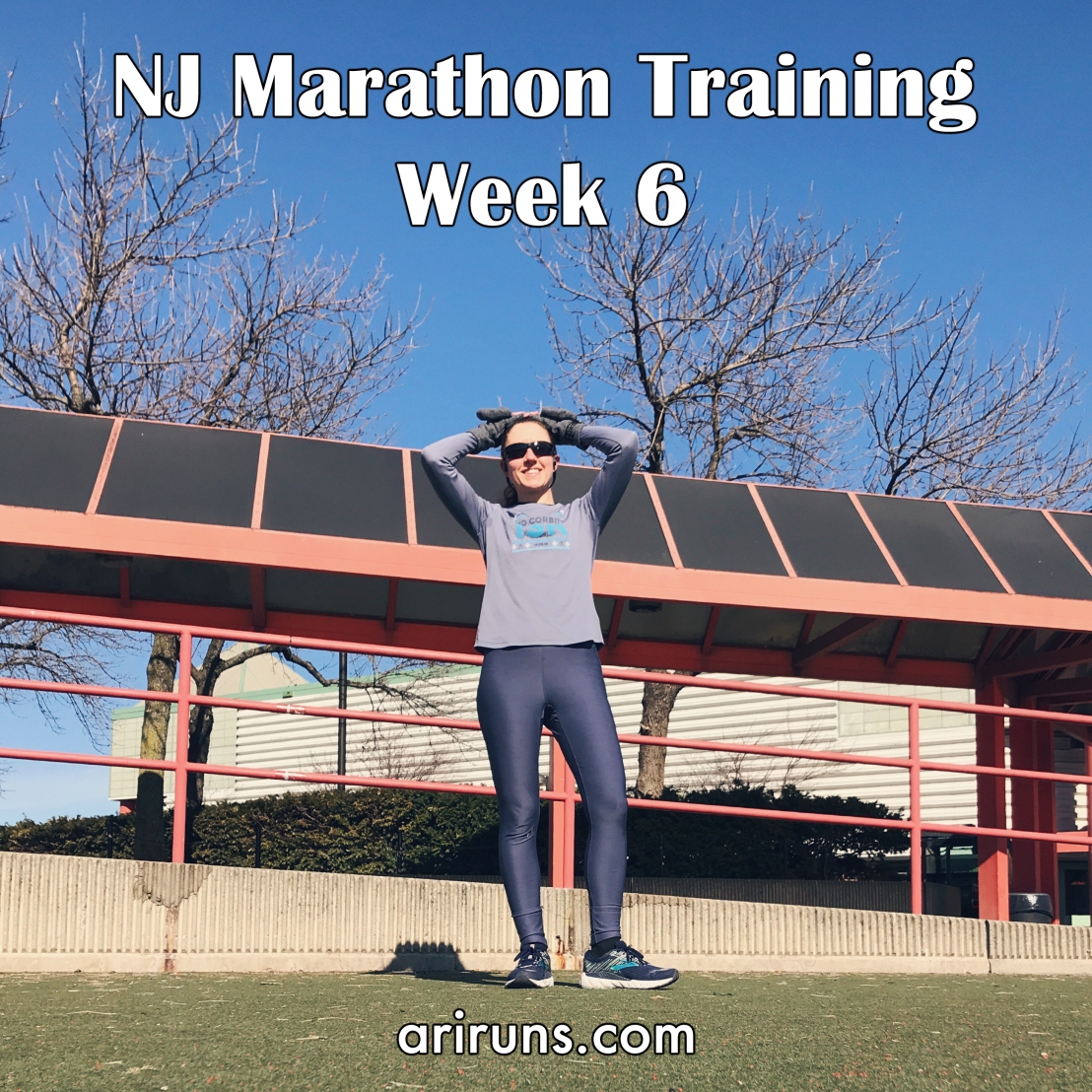 Monday was (as usual) my day off from running. I still like to get in an upper body workout and did the un-repetitive “Bored Easily” one from Fitness Blender (as usual). I pretty much do this workout every Monday, with 20 crunches in between each set which I’m still not sure are doing anything.

Tuesday was an easy 7.1 miles around Central Park at 9:54 pace. It started snowing halfway through the run, which normally I wouldn’t mind but this was hard, icy snow that pelted my face and eyeballs. And it was windy. I love running but honestly couldn’t wait for this one to be over.

Thursday I did my second upper body workout of the week. I just needed a short, easy run today so I ran 4.47 miles in Central Park, 9:58 pace. I was going to go once around the reservoir and home, but the reservoir path was so muddy from the recent rain and snow, I was only on it briefly before stepping off on the east side of the park to continue on the dry main loop.

Friday was tempo day: 3 x 8 minutes at half marathon pace. I decided to do this in flat Riverside Park so I could really focus on pace and not slow on hills. I am happy to report that I pretty much nailed this. According to my plan, my HMP is supposed to be 8:16. My paces for each 8-minute segment were 8:17, 8:16, 8:17. So close to perfect!

After the workout, I did my weekly squats & deadlifts workout which I like to do once a week on harder run days. Surprisingly, this lower body workout is always easier after a run than on its own. I guess because my legs are all warmed up. (Note: for this workout, I always ignore the time of each set and instead just do 10 reps for each weight. I figure it works out to be about the same and this way I don’t have to have my eyes fixed on the screen.)

Saturday I ran 8.02 miles at a relaxed 9:57 pace. So far my easy paces this week were almost identical. I was not running my easy runs this slowly last summer, but I honestly feel so much better this time around, so I’ll stick with it.

I followed that with the longest upper body workout I do each week. It’s the only one with push-ups, which I am very bad at.

Sunday was my epic long run – with intervals. The first half of this run was okay, the second half was amazing. I ran about 8 miles up north to the Little Red Lighthouse (and then some) and back down to Riverbank State Park track where I ran 8 marathon pace 800s (roughly; I’ll talk about it more below). In total I ran 17.09 miles that day, and this was the first time I had ever followed a longer run with so many MP intervals.

As I stated earlier, I’m feeling a lot better this training cycle than I did while I was training for NYC last summer and fall. I am not running less – actually I’m running a bit more mileage overall. But I’m running my easy runs slower. So I’m staying on my feet longer but the slower paces are easier on my body. I feel less fatigued in general and have had no issues thus far with soreness, aches, or pains.

I think I need to switch up some upper body workout stuff. I do three upper bodies a week, all with free weights and I don’t have a lot of muscle to show for it. My arms aren’t bad, they’re just… arms. I bought a resistance band a few weeks ago and maybe it’s time I open the package and use it. I’ll report back next week about how that’s going. I don’t necessarily want to look like a weight lifter, just have a bit more muscle than I do.

Sunday’s run was definitely the most memorable of the week. At first glance, the workout was somewhat daunting: 8 miles easy, then 8 x 800 at marathon pace with 5 minute recoveries. So, 8 miles easy plus about 8 miles of intervals (assuming an easy 5 minute recovery took me half a mile). I could handle 16 miles, but I had never done 16 miles with intervals like this before. What if I was too tired by mile 9? What if I couldn’t hit the paces? WHAT IF I DIED?!

For the first half of the workout, I ran up to the Little Red Lighthouse and then a little bit farther. I had never run father north from the LRL and hadn’t realized how much of a huge hill there is right around there. It’s HUGE.

I’m talking about that little curved section on the upper right, where it says Hudson River Greenway. Heading up that was so crazy – I wasn’t even running, more like tip-toeing very, very slowly. I actually stopped to catch my breath at the top before heading back down. I had planned on ending up at Riverbank State Park track for the interval section of the workout, and I arrived there with about half a mile to go in my easy 8 miles.

It was a cold day, but nice and sunny. Some guys were playing soccer (or something, there was a ball involved) on the field, and only a few others were using the track. I love this track!

Something weird happened with my Garmin. I’m still not sure what. I had programmed the workout into my Garmin app, it synced, and I was doing the workout. I pressed pause to hit the restrooms before I got into the interval section, but for some reason after the 8 mile mark my watch didn’t indicate that I was starting a new section of the workout. No beep or notification or anything.

So after a few minutes trying to figure it out and failing, I just decided to save the workout and start fresh manually tracking each lap. I put my water bottle down at the foot of a straightaway and used a mark on the track to start and stop each segment. I ran twice around for the MP intervals and just once around for the recoveries. This worked out nicely, and I actually wound up running a bit more than planned because I stuck to the outer two lanes.

I was supposed to run MP (8:35 according to the plan) pace for the 800 intervals, and I overshot all of them – not intentionally, but I’m still trying to gauge how certain paces feel and I didn’t want to look at my watch the whole time. For the most part, they fell between 8:05 and 8:30. But they weren’t hard. I think the flat surface made everything feel easier.

I took sips of my water + 2 gels mixture every couple of miles. Once again, I managed to finish the full bottle by the workout’s end. Very happy about that.

I felt great after the workout as I ran an easy 1.8 miles home. Part of me couldn’t believe I had done it. What seemed difficult at first was actually doable. It’s such a good feeling. Sometimes I still have trouble processing that I can do things physically that a few years ago I would never have been able to do.

The first thing I ate when I got home was a protein smoothie (which I eat out of a bowl with a spoon so it feels like ice cream) which is just half a serving of vanilla protein powder, a banana, a date, cinnamon, water, and ice. I also ate a scone I bought at Westside Market. It is a caramel and walnut scone. Did you know those exist? They do. I dipped it into the faux ice cream. It might look weird but it was really good.

This was a great week and I feel more confident than ever heading into the second half of training. I’m so excited to tackle the rest of my workouts. And eat more. I’m always excited to eat more.