I seem to have quite a few “better late than never” posts lately. It’s been a busy week. Also, I should be better with time management. Working on it.

This is week 4 in my training for April’s New Jersey Marathon. 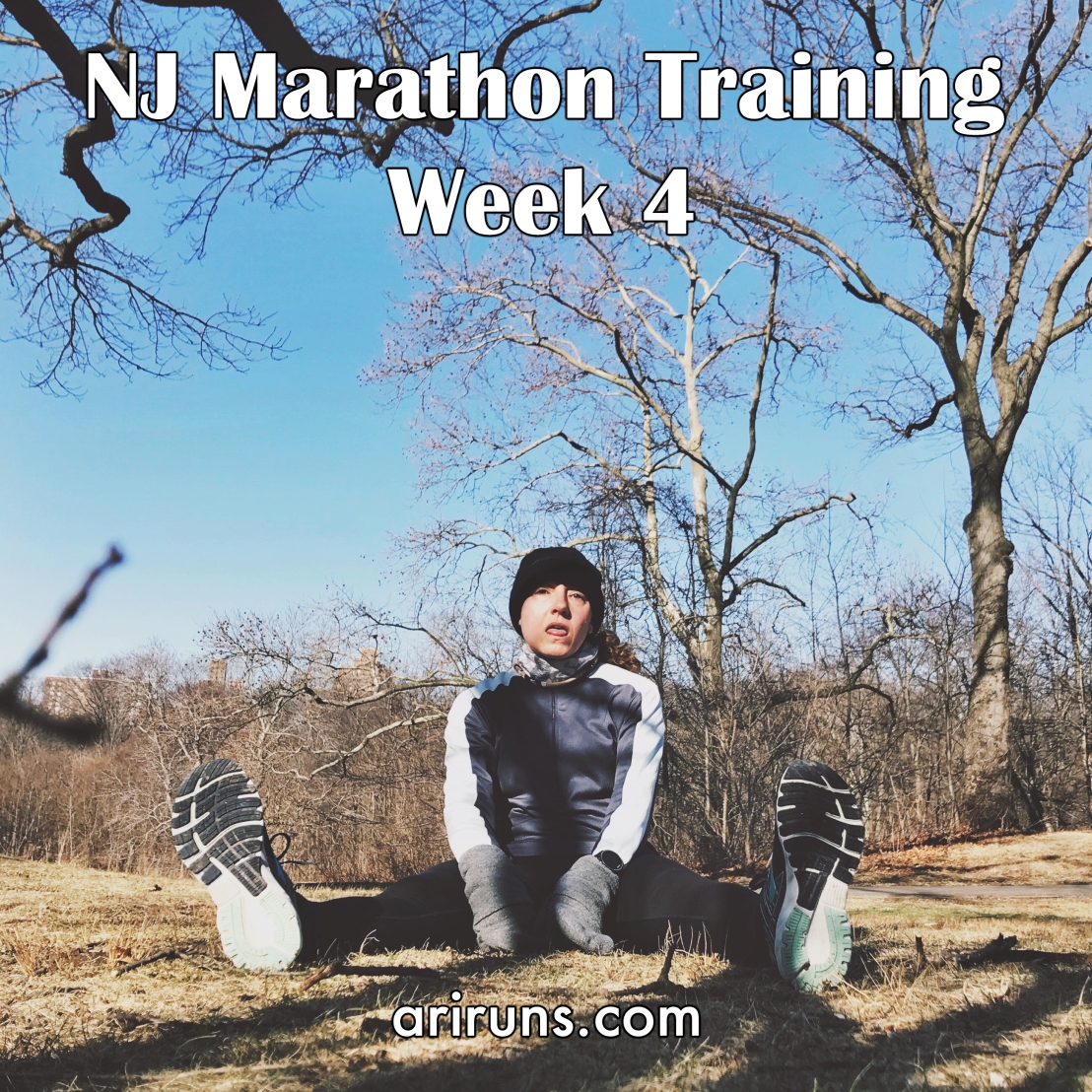 Monday was my day off which means my favorite upper body strength training workout from Fitness Blender. I know it’s not a true day off, but honestly my weight training is pretty minimal and probably kind of wimpy considering I still don’t have that much upper body strength even after several consistent years of it. You wouldn’t even want to see me try to do a pull-up.

Tuesday I ran 7.12 miles at an easy 9:49 pace. I did my usual Central Park loop route. It was cold, but at least it was above 20, which is kind of the breaking point between tolerable and not so tolerable.

Wednesday is usually when I meet with the Harriers for a speed workout but this was another morning when I had to take my dog to the vet, and he couldn’t eat beforehand. Since I didn’t want to confuse him by leaving him alone without feeding him, I decided to do the workout on my own after I dropped him off. The workout involved several clockwise loops around Central Park’s Harlem Hill at marathon pace, taking the 102nd Street transverse at an easy jog. 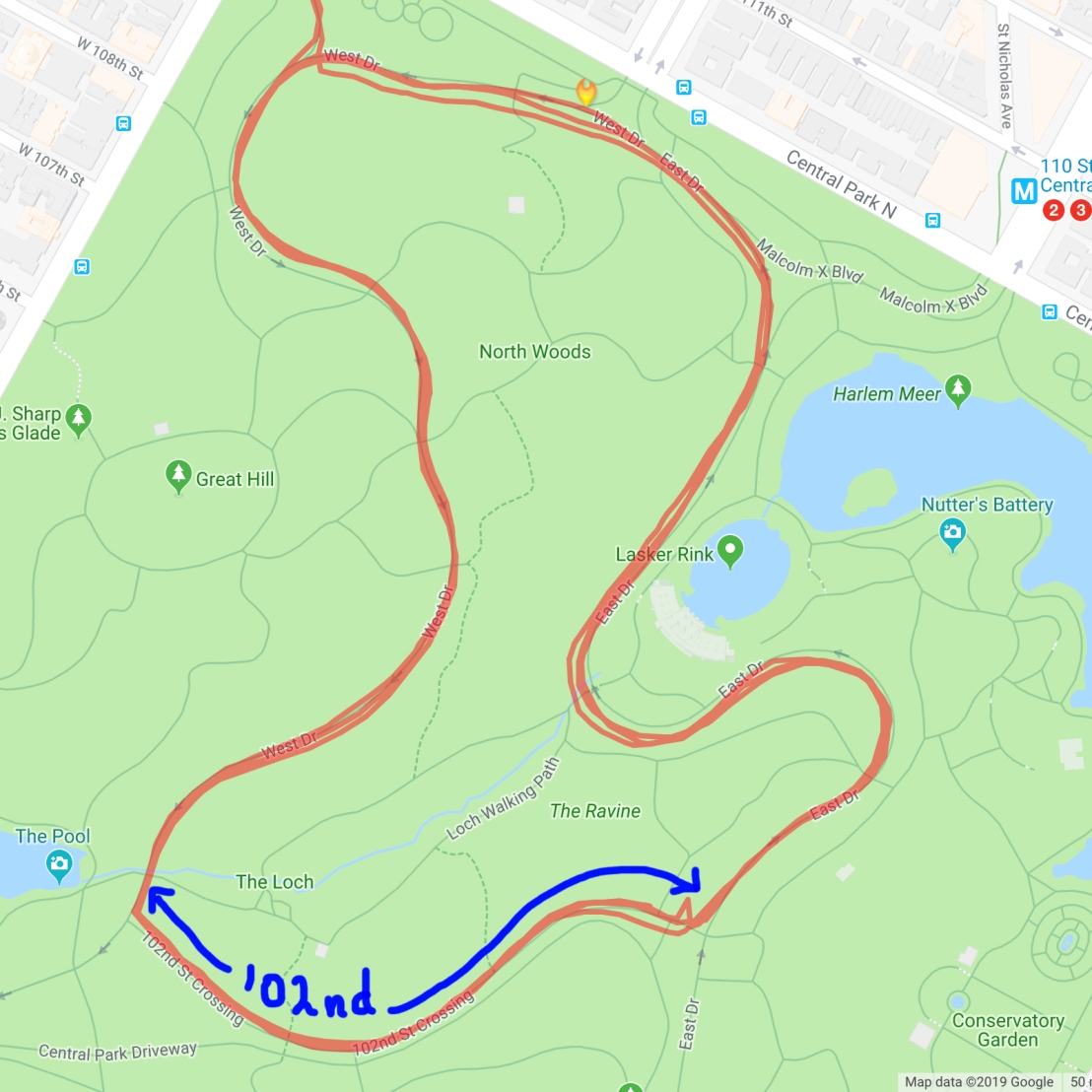 Folks, this was hard. It was about 20 degrees out but I was actually overdressed so I was both too cold and too warm? And I was probably running too long after I ate breakfast so I was dragging. I managed three loops around the hill, which has a nice downhill on the west side but is mostly uphill on the east, and a little over a mile in total distance. I couldn’t maintain MP on each, but I did manage to get a little faster each time. After three, I was done. I actually had to stop and sit down, I was so beat (see heading photo for reference). This was a tough one.

Thursday was just an upper body workout, as it has been for the past many Thursdays. The following week would begin my 12-week marathon training plan, and I planned to start running on Thursdays again then.

Friday is tempo day, but once again, I did the workout on my own instead of joining the Harriers. I have to admit, I wimped out. The group meets at 6:30 am, and temps were about 10 degrees at that time. I decided to run on my own after the sun came up and it warmed up to 20 degrees. Running in 10 is just very difficult in terms of what my lungs and face feel like. It wasn’t a long workout, just a few miles with 15 minutes at MP. My marathon pace is supposed to be 8:35, and I usually aim for 8:30 for “safety.” For whatever reason on this morning, I unintentionally went a little faster, averaging 8:25 pace for the MP minutes. I was surprised at how good I felt. Now I just have to figure out how to repeat that for another ten 15-minute segments in the marathon.

I also did a Fitness Blender squats & deadlifts workout that I’m trying to do on a weekly basis. This is a great lower body workout I highly recommend.

Saturday I ran 10.46 nice ‘n easy miles in Central Park. My goal was 10 and I went a little over because nothing in life is perfect. I like running “medium-long” on Saturdays which, these days for me, is around 8-10 miles. I went around the path outside the reservoir twice and then around the rest of the park’s loop. I ran this at a 10:06 pace, which is exactly the pace I’m supposed to be running my “easy” runs, according to the Harriers’ plan. This was a happy accident.

After the run I did my third upper body workout of the week. I’ve been aiming for three uppers a week lately. You’d THINK I’d have amazing arm muscles. I’m very good at doing upper body workouts; perhaps not as good at lifting heavy enough weights that it’s noticeable.

Sunday I ran 14.67 miles. I wanted to do a long run, and I’m happy to say I did one. My long runs lately have been hovering around 12-13 miles, and I wanted to up it this week. I decided to get out of Central Park this morning, so I just ran from West 116th Street straight down the Hudson River, figuring I’d turn around at about the 7 or 7.5 mile mark, wherever that was. It’s not the most amazing route, and there’s a little more traffic (both foot and car) than Central Park, but the route is pancake flat and just a nice change of scenery for me.

I kept it super slow, averaging a 10:10 pace. I hit Murray Street right around the 7.5 mile mark and decided it would be a good place to turn around. I noticed I had made it to Battery Park City, which is on the very lower west part of Manhattan.

I was practically right under the new World Trade Center building (which is not its official name but what I have always and will always call it, no matter how long I live) so naturally, I took a selfie as proof I made it that far.

Then I just turned around and ran back up to West 116th, ending right in front of the supermarket I wanted to visit. I had run 14.67 miles, and while I could have run an extra third of a mile to make it an even 15, to be honest, I just didn’t want to. My legs were, as they say, cooked. The 10 miles the day before and the 14 today were more than I had run in one weekend in a really long time. I just wanted to eat. And trust me, I did.

A few things I’ve been doing differently this training cycle, all of which I think are good:

This was a cold week! I’ve gotten so used to running in 20 and 30 degree weather. But one thing that had me worried going into winter hasn’t really happened yet, which is a huge snowfall. I think it’s snowed two or three times so far here in NYC this season, and none of them have stuck. I LOVE snowstorms and taking pictures in snow and being stuck indoors, but now that I’m running most days out of the week, I’m not looking forward to that first time I can’t run – if it happens at all this year. (I think it is supposed to snow this Tuesday, so I guess I’ll find out soon.)

In food news, on Friday I took a macaron baking class at Sur La Table! I have never in my life taken a cooking class of any kind – nor am I an expert baker by any means – but in December when I went to NYRR’s Run Center to pick up my Ted Corbitt bib, I walked by Sur La Table and saw a baking class going on inside the large glass windows. It looked so cool and I immediately knew I wanted to be in their next one. I will probably write a whole post about it because it was really fun. I’m excited and terrified to try baking macarons on my own but I hope to do it soon. If anything, my attempts could make great blog posts.

This was the last week before the 12-week training block for the NJ Marathon begins, and for that I am following the Harriers’ plan. It’s a pretty loose plan compared to NYRR, but from looking at it, there are a lot more MP miles worked into the long runs, so I’m actually super excited for that. I can’t wait to write about Week 5, which I will try to do sooner in the week rather than later.