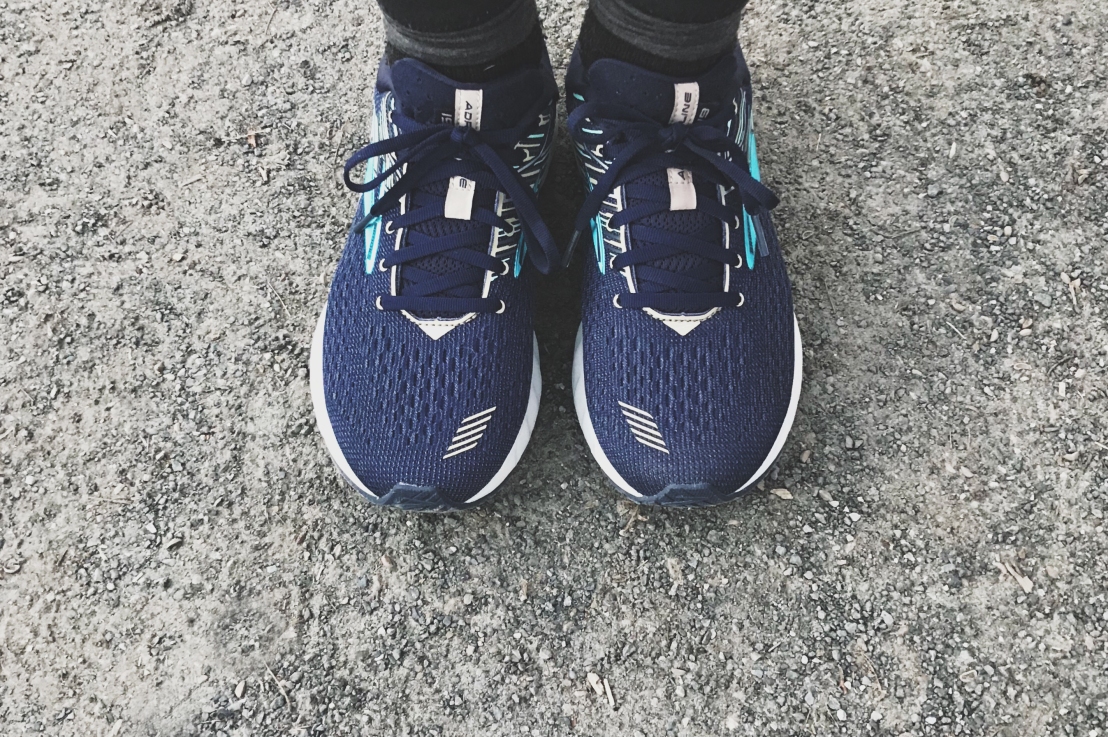 Maybe it’s more “pre-training.” I’m running 5-6 days a week, workouts with the Harriers every Wednesday and Friday morning, and continuing to strength train a few times a week. On non-Harriers days, I’m choosing how long and how hard to run, for the most part keeping it easy. The Harriers’ 12-week plan begins February 3.

But I will just go ahead and declare that I have begun training. So congrats, me!

For last fall’s NYC Marathon, I followed NYRR’s Virtual Training Plan. This time I wanted to try something different. The Harriers have been around since 1988 and boast some of the best runners in the city. I’m actually a tortoise compared to most of them. So I trust them to know what they’re doing when it comes to training. For members, they offer the training plan as a spreadsheet on which you can plug in your goal finishing time; from there, it generates your training paces. The mileage itself isn’t set in stone – on non-workout days, a range of miles is recommended, and it’s up to you to determine how far to run.

So while I’m following the Harriers’ plan, I’ll be doing a bit of self-coaching as well.

I thought I would continue in the tradition of summarizing my weekly training on this blog. This time, I might not get too nitpicky about each day. I also feel a bit protective of the Harriers’ plan as it’s only available to members, so I won’t get too detailed about that. But it’s no secret that they do speed work on Wednesdays and tempo runs on Fridays. 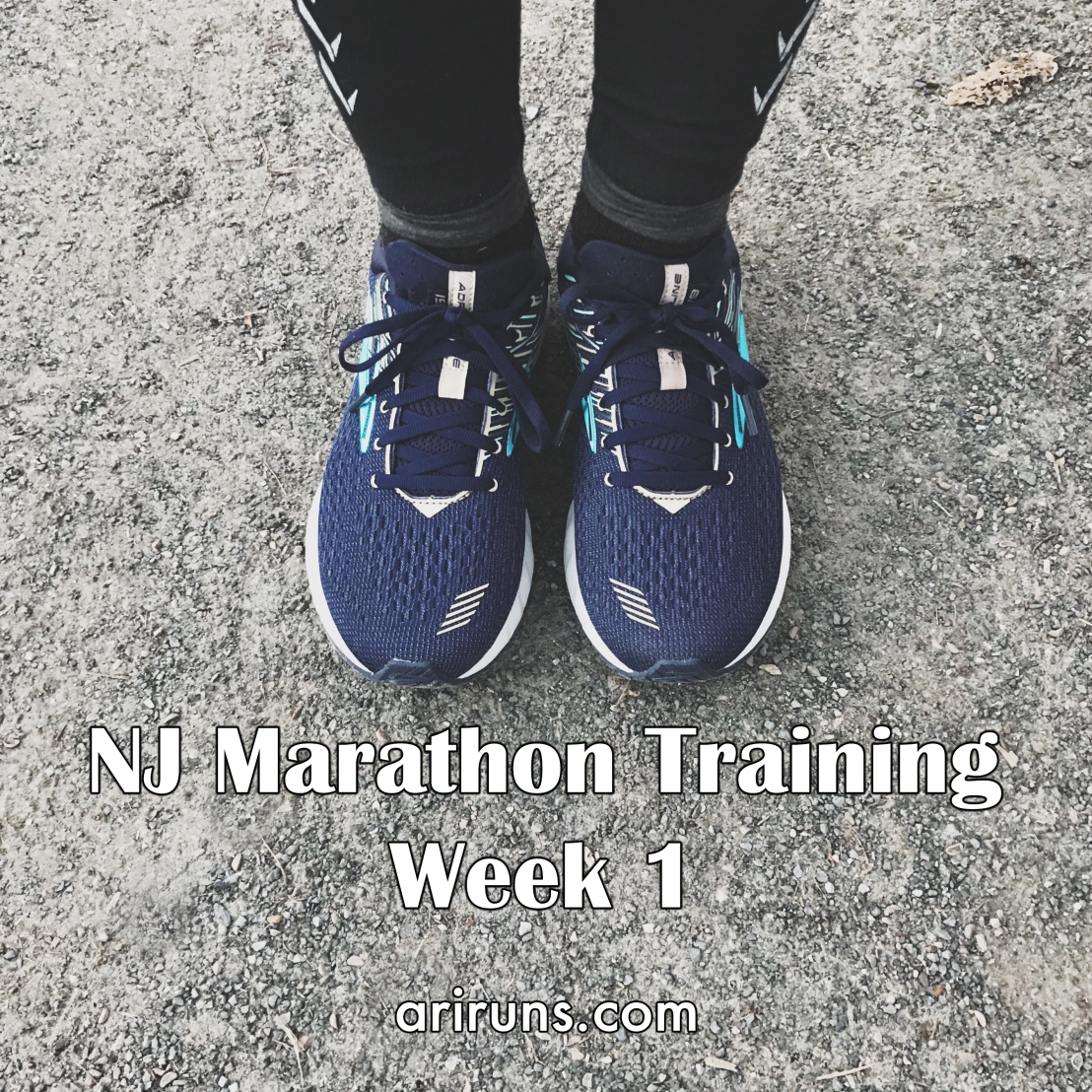 I finally changed all of my workout calendars so that each week starts on a Monday instead of a Sunday – a trivial task that, once I did it, made me wonder why I hadn’t sooner. Sunday is usually my long run and feels like the end of the week. Monday feels like the start. So that’s how I’ll be tracking my weeks, Monday to Sunday.

Monday was my day off from running and my favorite upper body workout courtesy of Fitness Blender, my go-to site for strength training. I almost always do this workout on Mondays.

Tuesday I ran 7.01 miles at 9:54 pace. Seven miles is the total distance if I start and finish at the end of my block and then do one complete loop around Central Park, so it’s a very common distance for me to do. I ran this purposely on the slow side, something I’m trying to do more often.

Wednesday was, coincidentally, another 7.01 miles but this included a speed workout with varying intervals at half marathon and marathon pace. This was a Harriers workout that I ran on my own later that morning because I had to take my dog to the vet and couldn’t feed him beforehand so I didn’t want to leave him alone – otherwise he’d be super confused as to why I hadn’t fed him and likely to chew something up. (He’s fine, by the way! Thank you for wondering!)

Thursday I did an upper body workout from Fitness Blender. I’ve been taking off from running on Thursdays if I feel like it, but that will probably change once I start the 12-week plan. I’m trying to err on the “take it easy” side right now.

Friday was a total of 7.16 miles which included a short tempo workout with the Harriers. I didn’t even try to keep up with anyone and ran on my own – if the workout calls for marathon pace, then I need to do my MP, not anyone else’s. I’m hoping I don’t do workouts on my own forever, but I definitely need to pay my dues and gain some serious strength before I can reliably keep up with any of the packs. Wore a new pair of shoes today, which is always exciting (details below). Following the run, I did an at-home squats & deadlifts workout from Fitness Blender. I really like this workout. I’m trying to do it once a week, and I’ve decided to do it following a harder run instead of on a non-running day so I can have harder days and easier days.

Saturday was 8.51 miles at 9:31 pace, pretty much the pace I run when I don’t think about pace, which is exactly what I was going for. The 8.51 mile distance was how long it took me to loop around Central Park, cross the 102nd Street transverse, and then head back down the west side to end up at the NYRR Run Center where I picked up my bib and hat for the Fred Lebow Half Marathon. The race was eight days out but I like getting things done early. I took the subway home from there.

Sunday I ran 12.01 miles at 9:40 pace. Since resuming running after the NYC Marathon, my long runs have been hovering between 8 and 12 miles a week. My last two long runs were 10 and 8 miles, so I made this one a 12. When the Harriers plan begins I’ll start building the long runs up again. I’m also trying to run these more slowly, but didn’t do a great job of that today.

Definitely made the right call in retiring these. Thank you for your service, 18s. You will now take me to the grocery store and to the park with my dog.

I don’t think I’m qualified enough to write shoe reviews, but I will say that I really like the 19s so far, and I’m glad I splurged on them instead of getting another (cheaper) pair of 18s. I read several reviews online before making my decision to go with the 19s, and it was probably this comprehensive 10-minute video featuring a charming Australian man that put me over the edge.

The Brooks Adrenaline are a stability shoe, and while I’m not fully convinced I need a stability shoe, I did fine with the 18s. I also love my other training shoe, the stability Saucony Guide ISO. So for now I’ll stick with what works.

I have had zero soreness, aches, pains, injuries, or anything of the sort since resuming running after NYC. Two things might be helping: I’m warming up much more than I used to, and I’m slowing down more than I used to. I think part of why I had problems during the last training cycle was that I pushed myself too hard and did not properly warm up. Tiny improvements. So far, so good.

Here’s my 2019 Fred Lebow Half Marathon hat! It’s so freaking warm and comfy. Probably warmer and comfier than last year’s hat, which is also super warm and comfy, two things winter hats should be.

Week 2 summary will be coming next week, as well as my Fred Lebow Half recap. I haven’t run the race yet; the forecast calls for rain. Could it wind up being as fun as last year’s Brooklyn Half? We’ll see. Just hope my bagel doesn’t get wet as I carry it home under my armpit. Maybe I’ll bring a plastic bag for it. Yes, that’s a good idea. Then I can toast it at home. These are my main concerns about race day.