Week 16 of NYRR’s Marathon Virtual Training 16-Week Program was the final week of training. The work was done. The hay is in the barn, as they say.

I started writing this post before the marathon, but since I didn’t have time to finish it, I am now writing this after the marathon. I will include everything that happened up until race day, which will be another post unto itself.

This final week of tapering, with the exception of the race itself, is a low-mileage week. At this point, I’m not gaining any significant fitness by running. I’m just trying to maintain the status quo. Making sure my legs still work. My lungs are functioning. My muscles feel more good than bad. Staying alive.

I’ll try to keep this one short.

Monday, as usual, was a day off from running and my favorite upper body workout courtesy of Fitness Blender.

Tuesday was scheduled 5 miler “AYF” (as you feel) run, so I ran along the top part of Central Park to once again meet up with the race course’s 23rd mile for my second mile, which I ran at 8:45 pace. All the other miles were slower. I started feeling some tightness on my right IT band area and an overall fatigue, so I decided to cut this one short and just run 4 miles. I didn’t think it really made a difference at this point.

Wednesday I had just a 3 mile Regular Run scheduled. This might be the first 3 miler of the entire program, and it was almost laughable that I had to run that distance. Three miles! I might as well stay in bed. I actually wound up running 4 – partly to make up for the lost mile the day before, partly because tapering is apparently really hard for me. So hard, in fact, that I ran the middle two miles faster than prescribed: the second in 8:22 and the third in 8:42. The first and fourth were each in 10:08, a fun coincidence I did not plan. My legs felt better than the day before, thankfully.

Thursday I had a 4 mile Regular Run. The marathon is in three days. Oh man. I can’t believe this is really happening. I ran along the race course’s 23rd mile YET AGAIN, this time running it faster than all the other times I’ve done it, in 8:32. The other three miles were easy. I was feeling better and better about this stretch along 5th Avenue between 110th and 90th. I felt good today.

Friday, just like last week, I decided to take the day off. I was scheduled for 3 miles, but honestly? I didn’t feel like it. I was reminded of the three days off from running I’d had after that 22 miler a couple of weeks ago and how good it felt to run again the day after my break. And I thought that maybe I should just take it easy until race day. I did a quick Fitness Blender abs and upper body workout instead.

I attended the expo on Friday, but I’ll write about that in the race recap.

I also stopped at a Goodwill on the upper east side of Manhattan (the fanciest of all Goodwills) and bought my throwaway clothes for race morning. I think I did pretty well for $15.98.

Saturday I was scheduled for 3 miles. Although I considered taking the day off completely, my physical therapist (who is also an accomplished runner and running coach) told me that the day before a marathon, he’ll run for 15-20 minutes. So I thought maybe I’d do the same. If I took it slow, I could do 2 miles 20 minutes. Maybe that’s all I needed. Really, at this point, would there be any significant difference in my race outcome if I ran 2 miles instead of 3, or 3 miles instead of 2? No. So, considering how much I had been on my feet the day before, I opted for 2.

I ran the first mile in 10:57 (!) and the second I sped all the way to 10:08 pace, probably my slowest run of the entire training season. Good. I ran in Riverside Park – not even going down into the actual park (which would require steps or ramps, both of which I wanted to avoid) but rather running right along the cobblestone walk on Riverside Drive. The ground was covered in wet, yellow leaves. Most of the trees have changed color for autumn – a stark contrast to the humid days of July when I started this program. It feels like such a long time ago. 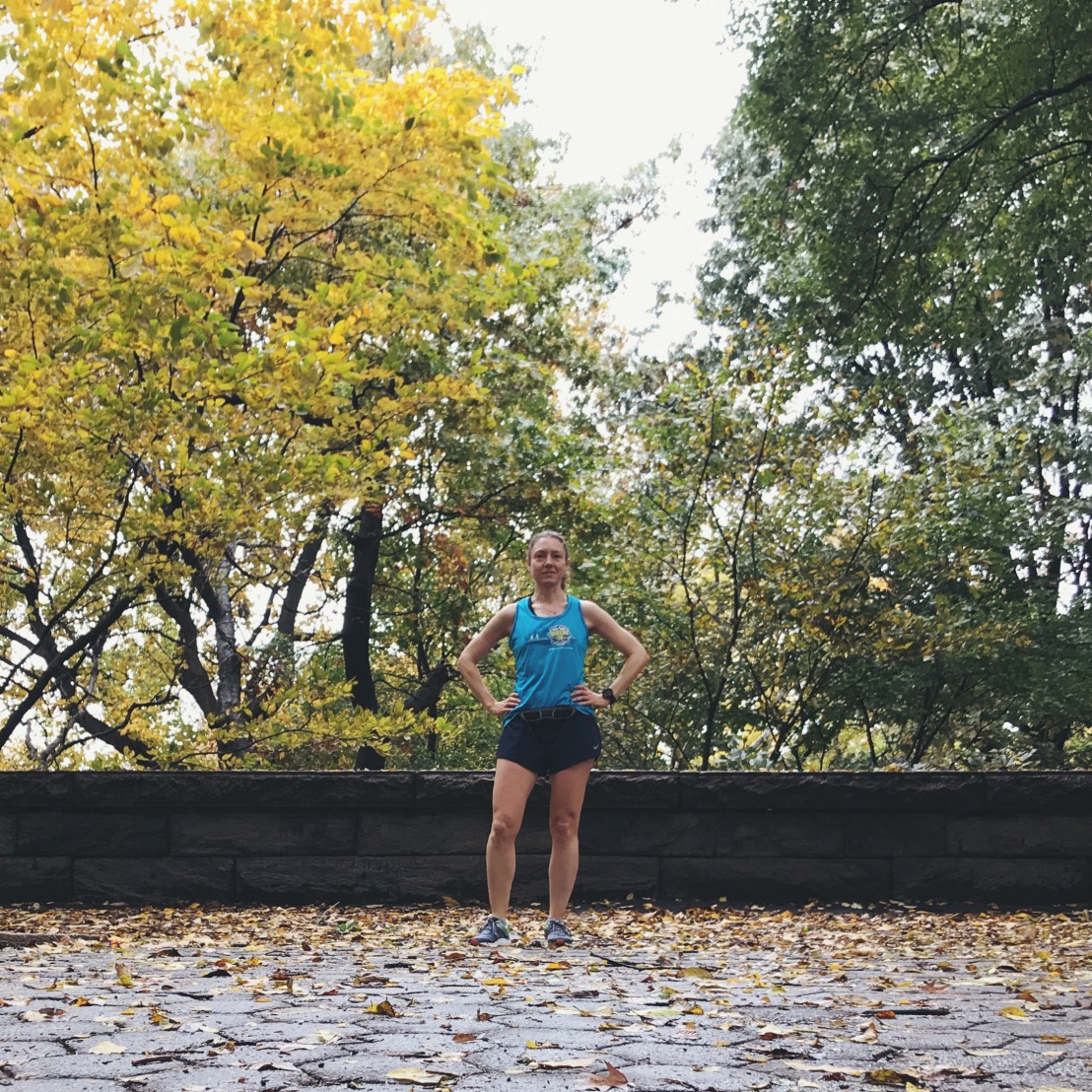 Later that evening, I attended a Fred’s Team dinner in Times Square. They had a generous pasta and cookie-heavy buffet laid out for us with some scheduled speakers. I arrived at 4:45, having just eaten lunch almost three hours earlier, but I didn’t care. I was going to fill up on mostly carbs and then stop eating at 6pm.

I had a big day tomorrow.