Once again I am a week behind in posting my weekly summary. I always feel like I’m behind somewhere in my life. Maybe someday I’ll be all caught up for a blissful 24-hour period and finally understand what that feels like.

Week 8 marked the official halfway point in my 16-week NYRR Marathon Virtual Training Program. This is significant, as whenever I hit the halfway point on my longer runs, I think now I am closer to the end than I am to the beginning, and I start fantasizing about what I’m going to eat afterward. Have you ever trained for a race, gotten your eating really clean, and fantasized about what you’re going to eat after the race? Me, I’m thinking sausage pizza. A whole one. And cookies. Large cookies. And these peanut butter s’mores I found a picture of online after googling “food porn.”

Weather-wise, week 8 was nearly identical to week 7: the first half massively hot and humid with a cooling off on Friday followed by a pleasant weekend. It also marked the start of pseudo-fall, with Labor Day falling on Monday. I’m hoping the humidity is done for the season. Please, let the cooler fall temps stay in place now and for all eternity.

Week 8 was a “down week” – the training plan I’m following, like many, has a week or two of higher mileage followed by a week of lower mileage so bodies can recover before starting the next higher mileage week. After 41 miles in week 6 and 52 miles in week 7, I was only prescribed 34 for week 8.

Having down weeks is something I never really did when I was running without a plan. I would run almost the same distances each week while gradually increasing my long runs every Sunday. I also used to be sore or injured more often. I just never gave my body a chance to really recover with a lower mileage week. The things you learn when you listen to people who know what they’re doing.

Monday was my day off from running, which meant an upper body workout day. I don’t take actual days off because I don’t see the point? My strength training isn’t all that intense – I only use 8, 10, and 15 lb. weights, 30 to 40 minutes at most. I work up a little sweat but never do so much that I feel sore the next day. As I usually do on Mondays, I did Fitness Blender’s upper body workout for “people who get bored easily.” I love this workout. It covers all the bases. I threw in some crunches at the end of each set because otherwise I’ll never do them.

Tuesday was a prescribed “Flex Day,” which gave me the choice of “6 miles, cross-train, or day off.” I didn’t need a day off from running as I’d just had one the day before, so I decided to compromise by doing both a lower body workout and a 3-mile run (which turned into a 3.25-mile run). I’ve slacked off on lower body workouts lately, and no, running doesn’t count. You need resistance training if you want to keep those legs in tip-top shape. So I did another Fitness Blender favorite: a squats & deadlifts workout. This is a simple, no-frills, sweat-inducing workout that always makes my legs feel stronger immediately. Afterward, I ran 3.25 easy miles in a pair of brand new Saucony Guides, an exciting purchase I made over the weekend at Jack Rabbit. This was my first run in these babies and I wanted to keep it short and sweet. They felt great! I still love my Brooks Adrenaline and plan to alternate between the two for my everyday runs.

I’d had a great run the Friday before in my old Saucony Guides, but that was to be my last run in those shoes. They have several hundred miles on them and although not too worn-looking, they’re ready for retirement. They are now my new walking shoes. I even wear them at work. 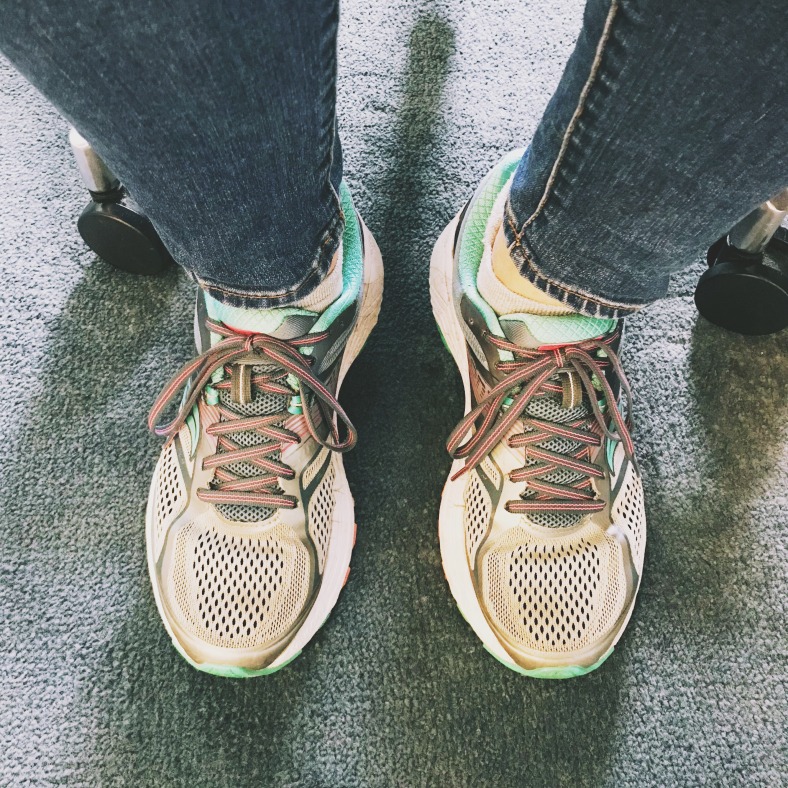 Wednesday was getting a little more intense: a prescribed 6 miles at a 9:12-9:24 pace. This is a reasonable pace for me to keep up for 6 miles so I felt confident. I ran this in Riverside Park and along the Hudson River Path. After a first mile in 9:48 (first miles are always slower, especially in Riverside), the remaining 5 miles were all faster than the prescribed range, hovering between 9:12 and 8:57. Overall pace was 9:12 – right at the top of what I was supposed to do. I’m starting to notice that running right around 9:00, once very fast for me, is getting easier to maintain without feeling like I’m dying. It’s actually, dare I say, comfortable. And if I can maintain that for 26.2 miles, I’ll finish my first marathon in under 4 hours. But I still have a long way to go until then.

Thursday‘s workout was the killer of the week: Intervals. Mile intervals. I was to run 8 total miles, broken down into the following:

I was nervous about this workout. The last time I attempted an interval workout, I couldn’t maintain all of the faster-paced miles, and this one had me running even faster.

I wore my new Saucony Kinvara 9s for this one. That’s right, I can’t be satisfied with just one new pair of running shoes. I repeated my purchases from last fall, getting both the new Guides and new Kinvaras. (I went to Jack Rabbit instead of the Super Runners Shop where I bought the Brooks because Jack Rabbit has a treadmill.) To my luck, both pairs were on sale! Go me!

Once again, I ran along the Hudson River Path. I knew I needed to hit faster paces and wanted to stay on as flat a surface as possible.

The first fast mile, which I ran in 8:47, was pretty easy to maintain. This is within my supposed “marathon pace,” according to the NYRR program. After a slow four and a half minute jog, I was ready for my next mile. The 7:55-ish range is familiar to me, as it’s about where I start for 5Ks and about my 10K pace. So I knew I could do it for a mile. And guess what? I did!

I continued following the workout plan, and almost couldn’t believe it when I was done, having hit everything I was supposed to. My fast miles for this workout were 8:47, 7:56, 7:55, 8:40. I guess I shouldn’t be too surprised, seeing that I’ve raced faster than this. But for some reason I was. I felt really proud and happy about this one.

Friday was a scheduled day off. Normally I only have one day off from running a week, but since this was a “down” week, I had two. I had a busy weekend coming up so I decided to give my legs a break. I still did some upper body strength training courtesy of Fitness Blender. I’ve been doing this workout for years. It’s really solid. Note: it says it’s 50 minutes, but it’s more like 30. She just does a lot of talking in it but you can fast forward through those parts after you’ve seen it once. I remember about 3 years ago having trouble with one of the moves, a one-armed plank where you twist and lift a weight in the raised hand. It used to be super hard, and now it’s easy. My point is: never give up.

Sunday was a scheduled 6 miles. (Initially it was my long run day, but I switched Saturday and Sunday so I could do my long run with Fred’s Team.) The third of these 6 miles was the 5th Avenue Mile race, where I ran the fastest mile of my life. Miles 1, 2, 4, 5, and 6 were all pretty normal. Read my recap of the 5th Avenue Mile and the fastest mile of my life.

Are you still thinking about those peanut butter s’mores? I know I am.