Speed work day! It was so wonderfully warm on this morning. Even before dawn, when I went out in the backyard to let the dogs pee, it honestly felt tropical. A tank top and shorts was the way to go for the run; I even would have been fine in a sports bra, and now that I think of it, I’m not sure why I didn’t do that.

I got to the track at 6:15, right as the sun was peeking over the trees. There were only three other people there, a man and two women, running up and down the bleacher stairs. Then they did some 200 meter drills; it looked like the man was coaching the women. They were all much faster than me.

I’m happy to announce that I ate a little something beforehand: three quarters of a banana (the part that wasn’t rotten) and a tablespoon of almond butter. So I felt good and had energy. I’m really glad I’ve decided to start eating a little something before runs. It may be more calories, but it results in better work… which makes you stronger… which burns calories. What a concept. 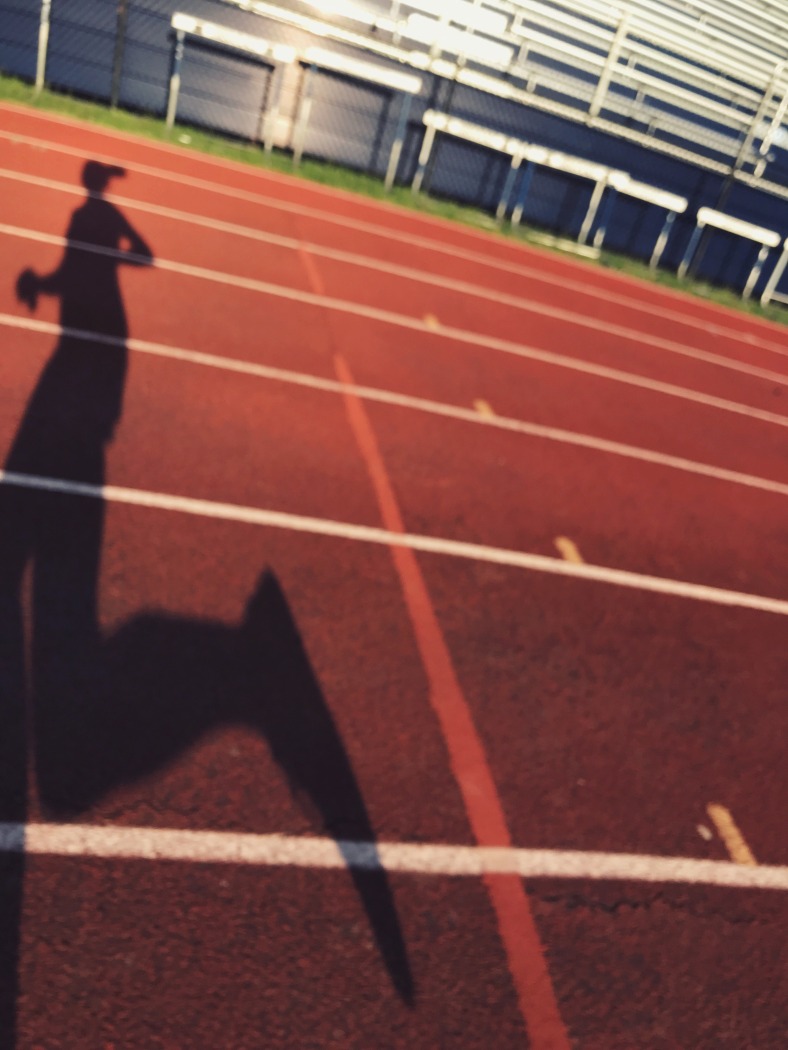 I did a mile warmup, easy peasy pace. One thing I love about speed work is that I feel no shame whatsoever about any of my easy paces. They’re supposed to be easy. Embrace the easy!

I didn’t have much of a plan for this workout; I’d only done two recent speed work sessions: 4 x 400 two weeks ago and 4 x 800 last week. I kind of wanted to do both today.

I decided to do a couple of 800s and then however many 400s I could get into the 45 minutes I had. Ideally I should have an hour or more for this workout. Once I move to the city and replace the time I currently spend on the LIRR with running, many things will change for the better, time management being one of them.

Although, I will miss running on this track when I move. It’s clean, quiet, safe, and usually empty. Just one of the many sacrifices I will be making for living within walking distance of every race that begins or ends in Central Park, not to mention a 35-minute run from my workplace.

To recap my last two weeks of speed work:

Usually after a fast burst, I can feel how much more I had in me. I can tell if I held back at all. I’m slowly getting to the point where I’m less afraid to give it all I have, especially if I know I’m only holding the pace for one or two revolutions around the track. So I think that’s what happened: my body knew it had more to give than the previous two weeks, so it gave.

Don’t get me wrong: this pace was hard, probably the hardest I’ve run in a long time. Although, last week during a 6 mile run (I should add, on a slight downhill), I did manage to clock a 6:40 pace for about a minute and a half. That felt incredible. The closest to feeling like flying I’ve ever come, and that includes actually being on an airplane.

Once I realized I’d done a 7:02, naturally I thought, Let’s see if I can get under 7. Because why not keep moving those goal posts, amirite?

As always, I listened to my body.

Before this, I had never done any speed work at a pace under 7:00 min/mile. So this was definitely a milestone for me.

This nearly killed me.

Of course I’m exaggerating, but only slightly. This pace was super hard, practically a sprint. I literally could not move my legs any faster. Afterwards I was huffing and puffing so hard, I was relieved to be the only person on the track – the trio of runners from earlier currently doing a longer run in the area (I assumed, seeing as though they had left their stuff).

I did my second 400 at 6:58, and as soon as I started it, I knew I had lost steam. I knew this one would be slower. Still, considering, 6:58 is excellent for me. But I was conking out. After this one, I did something I almost never do during a run: I stood still. It took about 15-20 seconds of bending over with my hands on my knees to catch my breath. 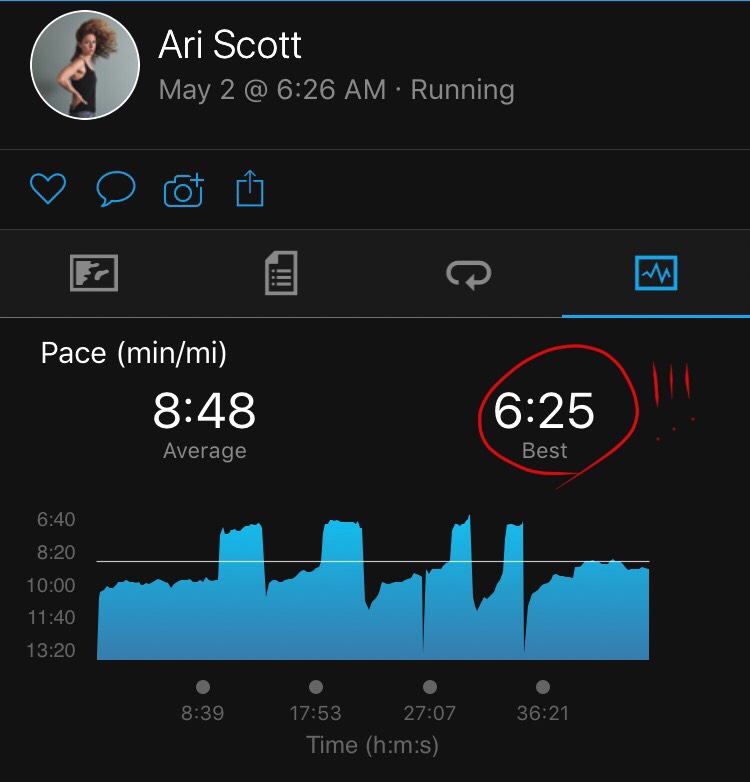 I had a feeling I was done. Doing only two 800s and two 400s felt like a bit of a copout, but at the same time, I went faster than I ever had before. I’m thinking that maybe the key to speed work is finding the right balance of going fast but not so fast that I feel like dying. And, of course, having enough time for the workout itself.

So I did an easy pace for one more mile, and then it was time to go. I like to leave before all the school buses start pulling in, and I also had a train to catch.

Running has truly become a life-changing experience for me. Not just physically. At the very least physically. Knowing that I have done the work to improve as much as I have even in just one year makes me more confident, than, honest to god, anything else I have ever done in my life. It’s insane. I used to think I wasn’t a “natural runner” and put this mental wall up that severely limited my progress, my goals, and the work I put in. I feel like I’ve done that my whole life in so many ways: told myself I was only capable of this much and nothing more; putting a cap on my potential before I even had a chance to challenge myself and prove myself wrong. 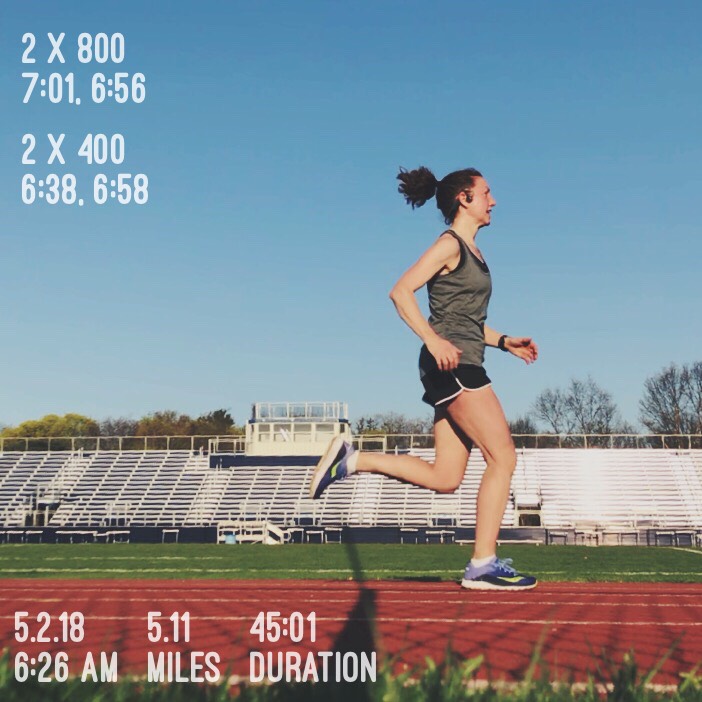