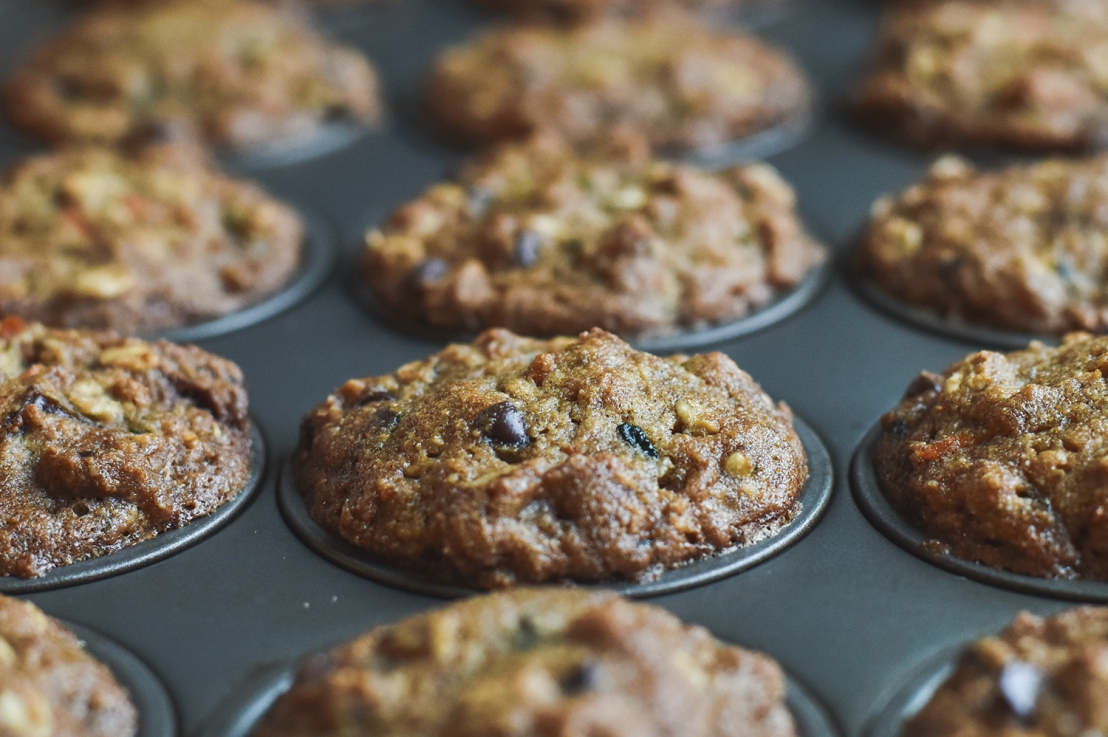 Superhero Muffins are THE runner’s food of the moment. Almost every runner whose blog I follow has made them, and I will NOT be left out in the cold. The recipe comes from Run Fast Eat Slow, a lovely cookbook written by elite runner & 2017 NYC Marathon champion Shalane Flanagan and chef & food writer Elyse Kopecky.

I bought this cookbook in late December with the hopes of not only learning how to cook food specifically for runners, but just learning how to cook… other stuff. I tend to cook the same things over and over, and I usually don’t grow tired of eating the same things over and over until I do, and then I immediately want to find ways to mix things up. So I bought the book.

I have to give credit to whoever came up with the name Superhero Muffins (subtitled “for a long Sunday run”), because that person is a genius. The muffins are delicious – don’t get me wrong – but I absolutely think the name sells them. In fact, the image of the recipe page in the book is what convinced me to buy it. They could have been called “Very Nice Yum Yum Muffins” and I probably would have still bought it. But Superhero Muffins? Take my money! Sign me up! I want in!

Now, unlike recipes from food bloggers, cookbook recipes are usually not online, since, obviously, they want you to buy the book. However, I found a pic of the Superhero Muffins recipe page on Amazon, so I feel like it’s cool if I post the recipe myself. If you like the recipe, you should definitely buy the book.

I haven’t made anything else from it yet but I plan to. Everything looks delicious. It’s all healthy, and I like that they don’t seem to skimp on taste. There is butter. They believe in fat. It’s just wholesome ingredients.

So let’s get on with it!

I will post the ingredients and directions from the book first, then show you how I made them below with, as always, my own photos.

So that’s all directly from the book. Here’s how I made them:

1. As I wrote above, I didn’t have paper muffins cups, so after I preheated the oven to 350º, I greased my tin with Earth Balance. (I have nothing against butter, I’m just used to Earth Balance because I lived with my mom for the past year of her life and she was a vegan. Earth Balance is a fine substitute, but I have to admit, butter has a better flavor. I might start using butter when my Earth Balance runs out.)

Although I have a 12-muffin tin, I used a 24-muffin tin because I tend to prefer things in smaller portions. It’s easier to grab one half-sized muffin than to get a knife and cut a full-sized one in half.

2. In a mixing bowl, I combined the almond meal*, rolled oats, cinnamon, nutmeg, baking soda, and salt. I decided against walnuts (I prefer them in salads to baked goods) but added two chopped Medjool dates and half a cup of Enjoy Life non-dairy mini chocolate chips.

*a.k.a. almond flour – Trader Joe’s sells this for relatively cheap 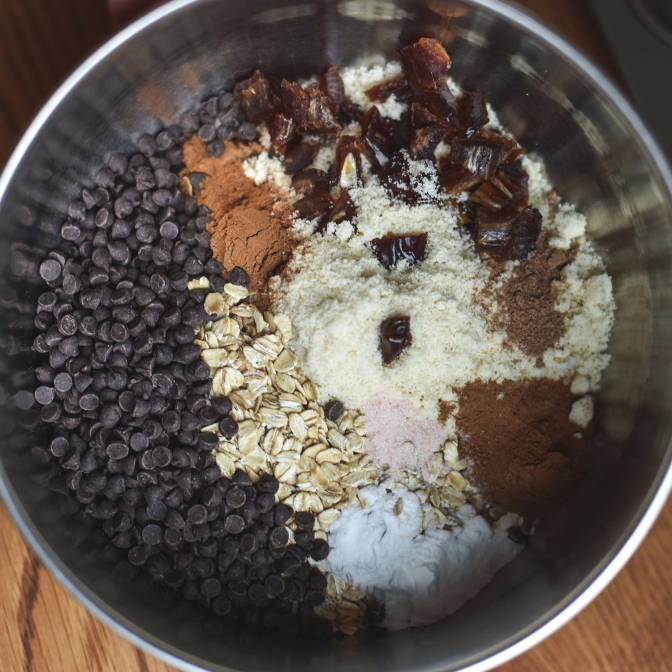 Before I could get to Step 3, I had to grate the zucchini and carrots. I wasn’t sure the best way to do this while measuring them into cups, but I figured out a system that seemed to work.

Then I added that to the dry ingredients, mixing until just combined.

(I kind of wanted to taste the batter but since it had raw egg in it, I did not.)

4. I spooned the batter into the muffin cups. For this 24-muffin tin, I realized that a 1/8 cup scoop was the best way to do this.

I couldn’t really fill them to the “brim” – maybe I could if there had been walnuts in the batter. This is what my tin looked like when I was done trying as best I could to evenly distribute the batter. 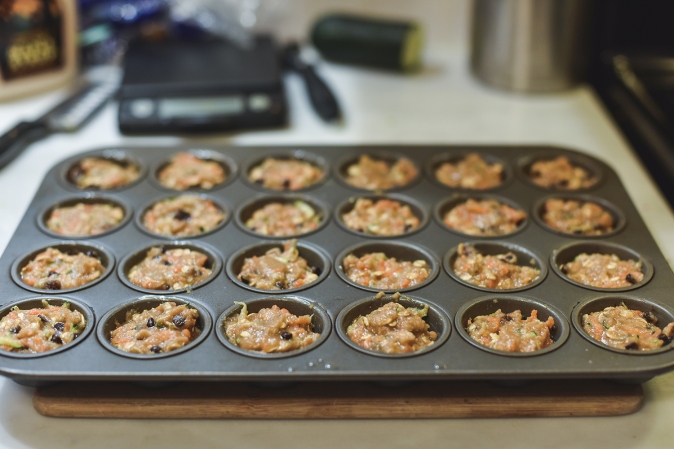 I snuck a peek halfway through. EXCITING!

They baked until slightly browned, which was 25 minutes, at which point I stuck a butter knife into one and it came out clean. I think the photo in the cookbook shows them a bit more browned, so I probably could have left them in for longer. 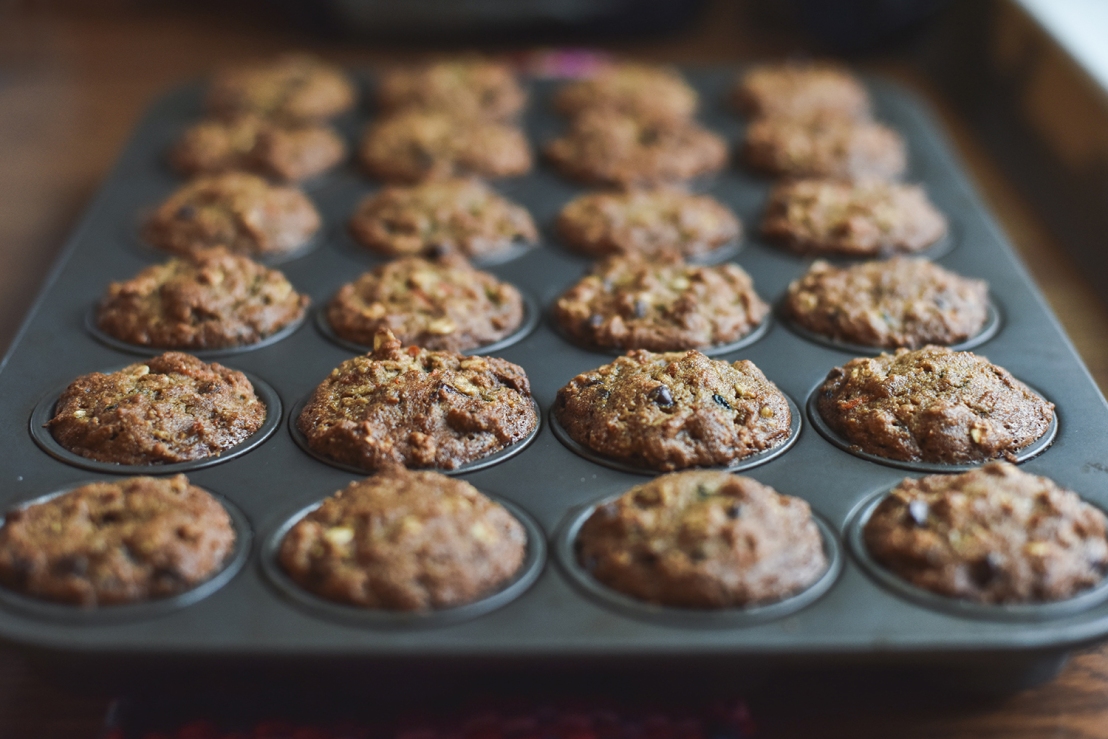 I know you’re supposed to wait for things to cool, but I am impatient, so I took one out of the tin while still warm. I’ve since learned that they are delicious cold, but they are also delicious warm.

Again, I made these half the size the original recipe calls for. They’re a nice, 4-bite size:

They’re a really nice balance of sweetness and wholesomeness: a half cup of chips and the maple syrup is just the right amount of sweet for this recipe. Balanced with the carrots and zucchini (which are not overwhelming), it’s the perfect snack that doesn’t make you feel like you’re overindulging.

Look at all that good stuff! I think this size makes for the perfect pre-run snack. 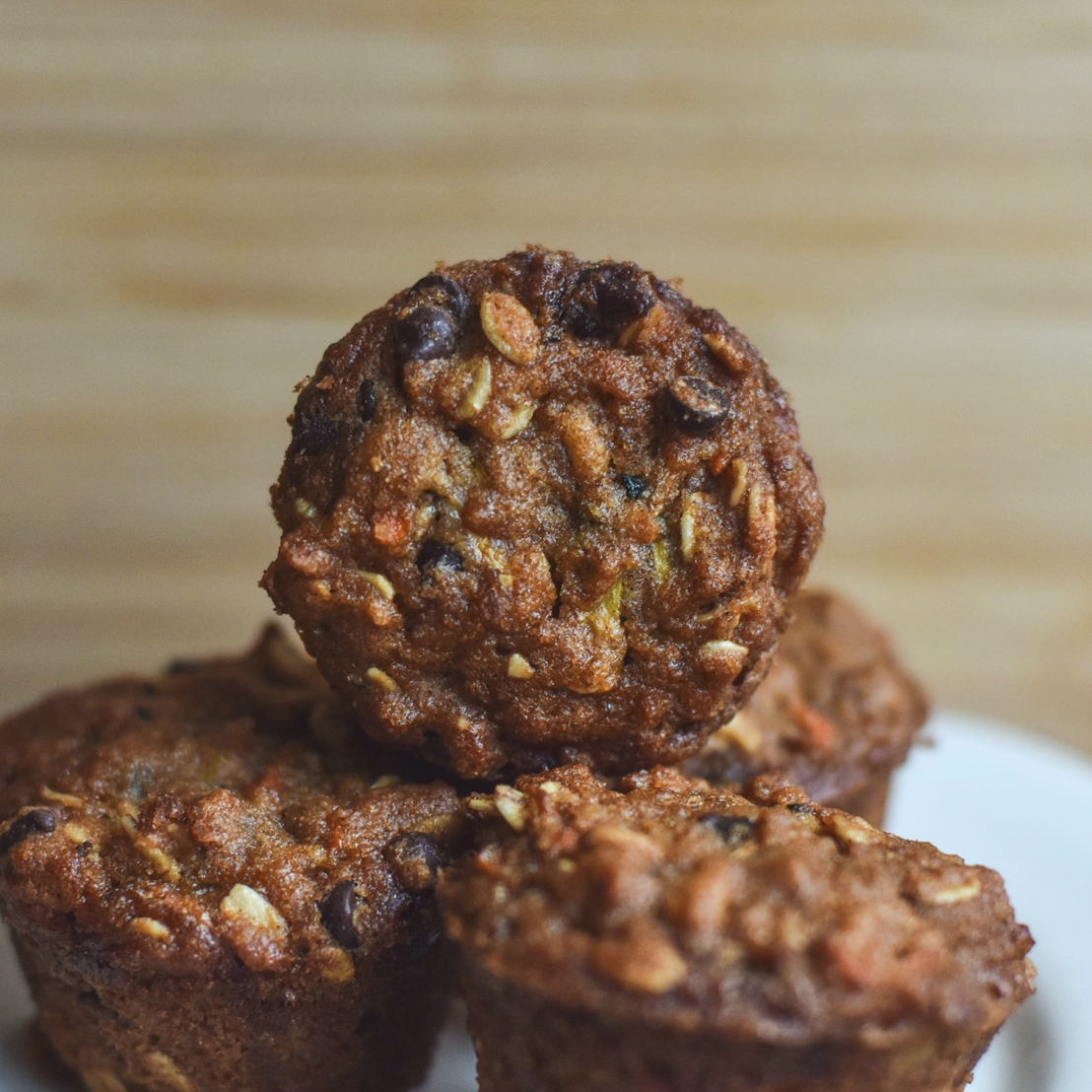 And here’s an idea for how to incorporate them into a breakfast (or late night snack!): 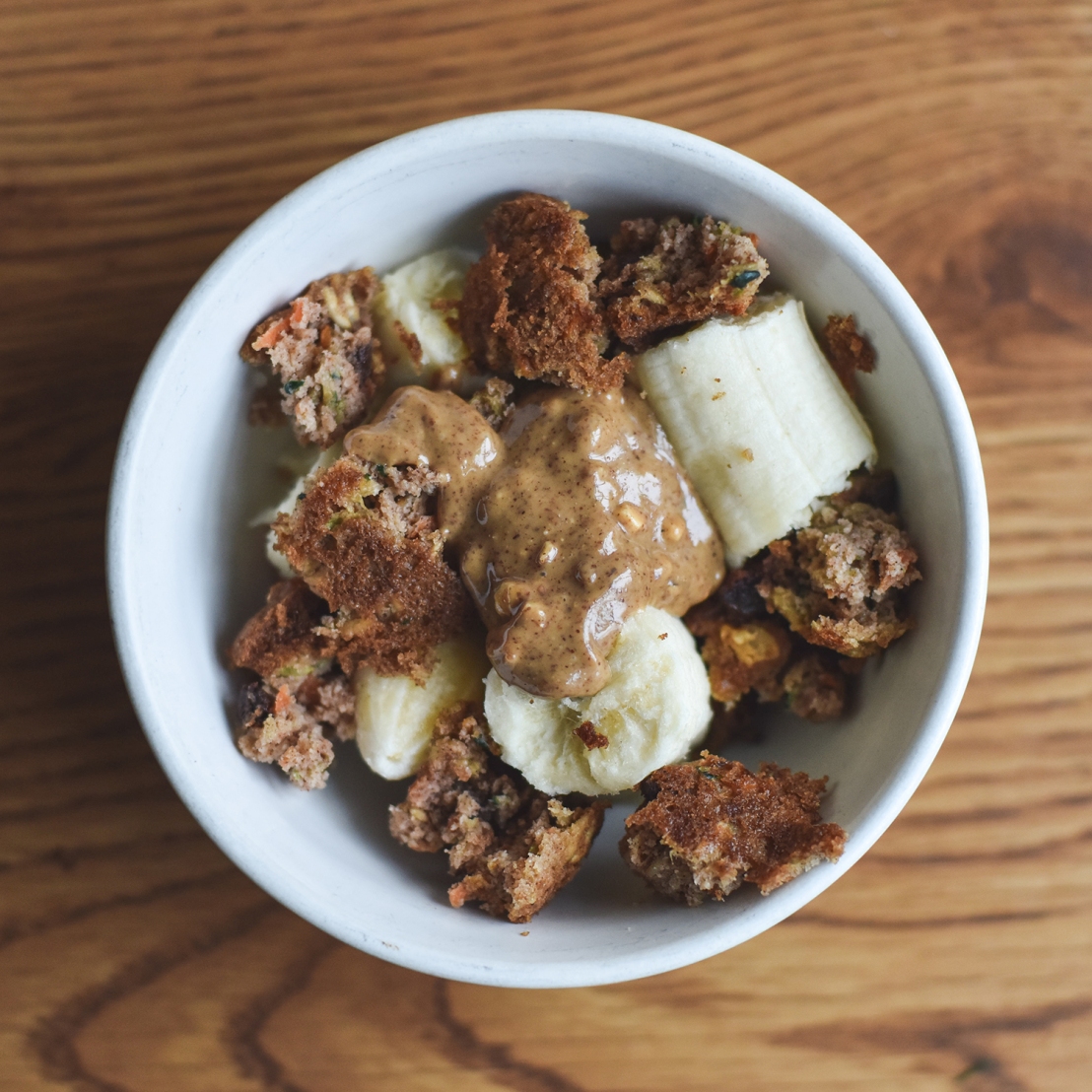 They also freeze well. I separated my batch into three Pyrex containers, stuck two in the freezer, and the other in the fridge.

Verdict: I love Superhero Muffins! I definitely will be making this recipe again.