This morning’s Ted Corbitt 15K in Central Park could not have gone any better. With the exception of a couple very minor hiccups in my METICULOUSLY PLANNED PLANS, everything went well.

Heads up: this will be a long post and I took a LOT of pictures. Settle in. Grab a snack. Hell, grab dinner. We’re gonna be here a while.

Late last night, I was worried because snow was in the forecast for the morning. Runners got a text from the race officials saying they would be making a race status decision shortly after 6 am – right when I had planned on leaving home to drive in. I figured I’d leave even if I didn’t hear anything. Worse case scenario, I’d get the cancellation text on the road, turn around, come home, and do my own 15K run.

But luckily, the snow held off. We got a text at 5:45 that the race would go on as planned. To the city I went!

If you’ve ever driven into Manhattan from Long Island, you know how hellish traffic can be. I was coming from Northport, 45 miles away from the parking garage. I would imagine during a normal time of day during the week this trip would take me well over two hours.

But it was super early on a Saturday. I got to the parking garage in 60 minutes flat. When I got onto the Queensboro Bridge, I actually woo-hooed.

Don’t worry, I took this super quick without looking at my phone

Lord, let me only ever have to drive into the city super early on weekend mornings.

The most annoying part of my morning was the ten minutes I spent waiting to get into the parking garage. Even though I had a reservation, the guy was like, “It’s pretty packed, let me see what I can do” and I was like yeah, but the reservation and eventually I got in.

It was a quick walk to the nearest Starbucks (which is true of literally anywhere you are in NYC) and I got a “What’s the smallest cup you have?” sized coffee and waited on line for the bathroom. Which, at this point, I really had to use. Like. Really. 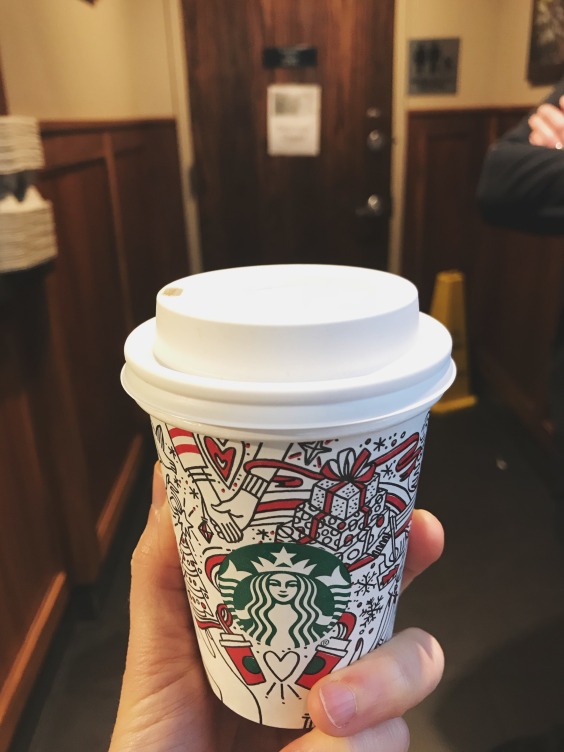 One problem, though: the toilet wouldn’t flush. And it was, um, full.

Next stop: the port-a-potties!

About 15 minutes before the start I made my way to my corral, which was H. The fastest runners were in A, and I’m not sure how far it went up the alphabet but H was probably somewhere in the middle. Runners are assigned corrals based on previous NYRR finish times, but since I didn’t have any recent NYRR finish times when I signed up for this race, I just predicted what my time would be and I guess I was assigned off that.

I would soon realize that my prediction had been off.

Remember what I wrote just yesterday?

This is what actually happened:

First of all, the first half mile or so was kind of a bullshit pace, because everyone was bottlenecked through a narrow passageway going along the 102nd Street transverse (the road inside Central Park going east-west). I was probably going like 13:00 min/mile. 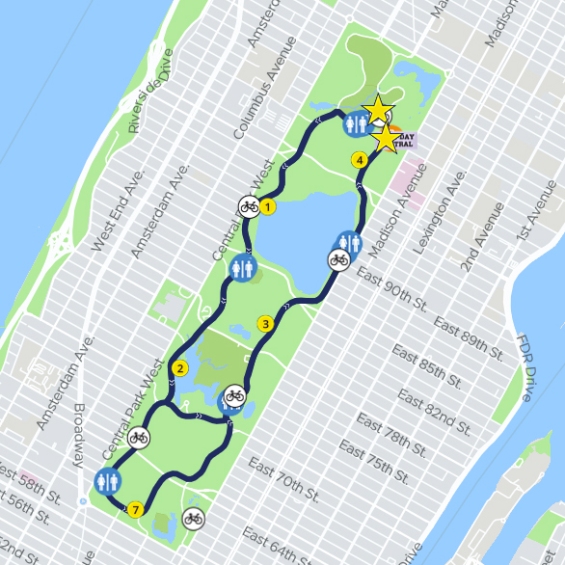 Once we were firmly on the west side, the road had spread out to make room for everyone. There was a slight uphill, and that’s when it dawned on me: we were not going to go up the BIG HILL. Those of you who have run this route know what I’m talking about: the long and steady incline that happens when you run counterclockwise here:

When I realized we weren’t even going to touch that part of the park, I was SO RELIEVED OH MY GOD. Hell, this was going to be cakewalk. Because other than that hill, at least compared to the roads I run here on Long Island, the perimeter is like the right side of my chest in 4th grade: flat.

I mean, there are a couple dips and inclines, but it’s nothing. In fact, I had such an easy time with the “hills,” I found myself passing almost everyone. I’m not trying to brag, but maybe I sort of am? Basically I’m fucking awesome and you should worship me.

For the first couple of miles, I kept telling myself: “This is just a long run.” I repeated this over and over between mouthing lyrics to Madonna and Lady Gaga songs. Again, this was my first race longer than a 10K. I totally know what to do with my body in a 5K at this point – I know what I can and cannot handle. But for this distance, I was more unsure. And I played it conservatively – at first.

At the 3 mile mark, I felt… good. I wasn’t out of breath. I wasn’t tired. In fact, it had been feeling a lot like just a regular run to me. Maybe too comfortable. At this point, I decided to push it a little. But just a little.

Here are my first 3 mile paces:

Rather than breaking up the race in my head as a 10K and a 5K, it became three 5Ks. Once I hit 3 miles, I said to myself “Okay, now just do that again. Then just do it one more time only a little faster.” Breaking it up into chunks really helped. I highly recommend doing this when distances seem daunting.

Anyway, I was happy to see that, as I had predicted, I had “dipped into the 8s.” Could I keep this up? You’re about to find out!

First I should mention, my youngest sister Kyla and her family live on the Upper West Side and came out to see me – and even stuck around for my second loop. Here’s a still from a video she took.

Naturally, I played it very chill.

So the second 3 miles were a little faster, but still feeling good.

Hmm, what happened in mile 5? That may have been where I was holding back just a bit. Playing it safe. Figuring shit out. Feeling out what I had left. I did that every now and then. The last thing I wanted was to go full out and then run out of steam.

Still, I was pretty pumped at these paces. Here I thought I’d be sitting snugly in the 9s, maybe “dipping into the 8s” if I felt good. Hell, I was fully dipped. I was in the dip. And I was not coming out.

By the time I hit the 6 mile mark, it was on. This was the final 5K. I didn’t have it in me to do a 7:42 pace like I did on Thanksgiving, but I definitely sped it up. Things felt good. Maybe it was my imagination, but it seemed like I was passing a lot of people. I realized that I probably should have started in a faster corral. I had underestimated myself.

(Note that these paces are from my Garmin. Even though this was a 9.32 mile course, I had run closer to a 9.52 mile course – I assume by not taking the innermost corners, etc. In case you were wondering.)

Well, what do you know. ALL of my mile paces, with the exception of the first bullshit mile, were in the 8s. And that last half mile, well look at fuckin’ that.

That last half mile was something. I got emotional. WARNING: DEAD MOM TALK ABOUT TO HAPPEN.

I started thinking about my mom at that point. I don’t know why. Sometimes this happens, where I think about how she can’t feel anything anymore. And it makes me feel lucky that I can. I want to feel things so much, just to make up for the fact that she can’t. I was on the verge of hurting at this point. My legs were tired. My lungs couldn’t work any harder. Tiny, icy snowflakes were battling my face and eyeballs. But I kept pushing, trying to just feel. Even if it hurt, it was better than feeling nothing.

When I finished, I did something I have never done after a race before. I leaned over and cried.

This was only the fourth time I’ve cried since my mom died. I don’t cry easily. Not that I’m walking around happy. It’s more like, I’m almost devoid of feeling. Still. Calm. Here’s a quote that I have always felt like I relate to very much:

“I felt very still and empty, the way the eye of a tornado must feel, moving dully along in the middle of the surrounding hullabaloo.” – Sylvia Plath, The Bell Jar

In fact, sometimes I wonder if I like the pain that goes along with running because it actually forces me to be able to feel something.

Wow, this took a morbid turn, but SO DOES LIFE SOMETIMES I GUESS.

On a lighter note, after I had wiped away my snot and tears, I was handed a cinnamon raisin bagel and an apple, and both were the most delicious things I have ever eaten.

But also, LOOK AT ALL OF THIS GORGEOUS SNOW! First of the season, baby. 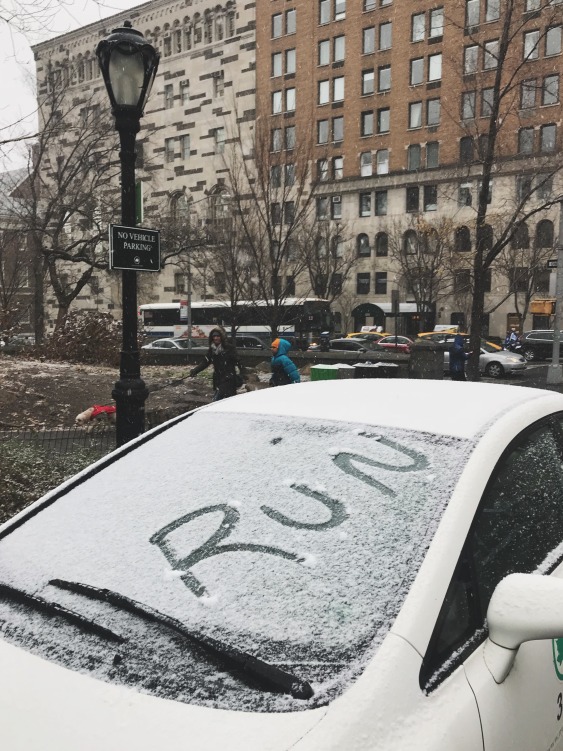 I made it back home in an hour 20 and had a big lunch.

Thank you to all the volunteers and NYRR staff. Not that you read this, but who knows? You might. I had a great time, and I hope to be back next year.

But first, see you for next month’s half marathon!