I wanted to test out the video quality for this morning’s pic but was running low on time. So instead I just did a quick regular pic – a 180 degree turn from yesterday’s, which was taken from above while I looked happy. 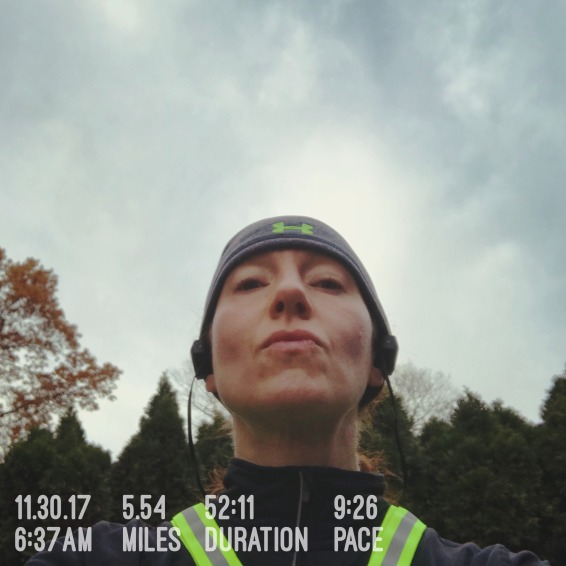 I may look menacing here, but I actually felt great. I had just run five and a half miles on legs that felt strong and with lungs that felt healthy. What more can you ask for? I mean, a million dollars, I guess. Or a billion. Four billion? Universal health care. Peace on Earth. Light traffic. But good legs and good lungs are a nice start.

I really love how my legs feel when I’m running consistently. I don’t even mean while I’m running, but at all times. While standing. Taking the stairs. Walking. Standing in line. They just feel stronger. Like, more solid. Like… two dense oak trees. These descriptions are making them sound less and less appealing, aren’t they.

I just like feeling strong. I realized a long time ago that working out was worth it. Because even if you’re somewhat uncomfortable for a whole hour, that’s 23 other hours in the day where you will feel good. That realization really stuck with me. Now, a big part of my overall motivation is just that – wanting to feel good for those other 23 hours a day.

If I ever write a workout book, I might call it 23 Hours a Day. Don’t steal that.

This morning’s run was to make up for yesterday’s, which I skipped due to time and general malaise. Instead, yesterday I did a Fitness Blender squats and deadlifts workout that I am trying to do once a week in order to build up strength in my legs. I’ve been not so great about that in general – I think for a long time, I assumed that running would build up my leg muscles, and then I’d do upper body strength training to balance it out. I kind of knew this wasn’t right. I think I was just lazy.

I have a bunch of half ideas cooking that I’d love to write about here, but for now I think I’ll just keep this one short. Tomorrow is a new day. If you’ve been struggling to get up and do a workout, just think about those other 23 hours. Do it for them. And keep reaching for that four billion dollars.