This past holiday weekend marked a series of milestones: my first sub-8:00 race pace (not counting the Northport Nautical Mile I did in June), first time running two races in one week, first trail race, first race without headphones. And, now that I think about it, first Thanksgiving without my mom. It’s so weird when life changes, but I guess that’s just what life does.

I mentioned in my last post that I met a runner named Erica at the Thanksgiving Day race, and she invited me to run a cross country/trail 5K in Syosset that Sunday. I have to admit, my first instinct was to think “I can’t,” only because, I don’t know, what if I had a THING to do Sunday? You never know when you might have a THING. Also, two races within four days? Insane! My body might break!

Of course I immediately recognized these as lazy excuses, and of course I wound up doing the race. And I’m really glad I did.

The day before Sunday’s race, I ran a moderately paced 4.5 miles and continued to make my way through Thanksgiving leftovers. I feel like I’ve been carbo-loading for a week.

The New York Blood Center Rob’s Run 5K was held on the grounds of Stillwell Woods, a combination of fields and wooded trails in Nassau County, Long Island. It’s about a 20-minute drive from where I live – not far at all, but the longest I’ve traveled so far for a race. Named for the late Rob Lauterborn, member of the Plainview-Old Bethpage Runner’s Club and “talented runner and extraordinary human being,” according to the event page, and I am inclined to believe it.

It was cold that morning, although not as frigid as the race on Thanksgiving. I wish I could be one of those people who wears shorts and a tank top in 40 degree weather, and maybe I will be someday. While I don’t overdress, I still feel like I need to cover my limbs. For this race I just wore a thin base layer on top and leggings, as well as a head/ear band and gloves.

The race instructions “heavily discouraged headphones” due to the unpredictable nature of one’s footing, given that the trails are covered in dirt and rocks – generally a given for trails. So I left my headphones in the car, a first for me.

I really love listening to music while I run – a subject I haven’t even delved into on this blog but one of these days I will – so I was a little scared as to what my brain would do without music for 3.1 miles. It might have to think! About stuff!

And of course, wouldn’t you know it: a good third of the runners had headphones. Damn it. I could have gone back to the car for mine, but you know what? I was going to try something new.

The women’s race started 30 minutes before the men’s, and this was a first for me as well: no dudes. I wondered if that would affect my performance at all. I guessed not (and it really didn’t, other than the lack of crowding), seeing as though there would most certainly be faster women than me in the race, just as there are always faster men.

Subjects in photo are shorter than they appear

At the gun, we took off down the field. Immediately, what seemed like dozens of women were ahead of me, but that was okay. I wasn’t going to stress getting a “great” time for this race. This is for fun, I tried telling myself… while still giving it my all.

Given the lack of music in my ears, I was very aware of my surroundings – breathing, footsteps, huffing, puffing, the occasional burst of phrase: “Doing good.” “On your left.” “See you in the woods, Gretchen.”

We soon found ourselves following a narrow trail in the woods, and when I say narrow, I mean there were many places it was impossible to pass the person in front of you. Don’t get me wrong – I wasn’t about to break any course records or even place, but there were plenty of times I wanted to go faster but couldn’t. At wider spots, I would make my way around people, and sometimes people would make their way around me. But there were definitely moments I felt I could have been going faster. Some parts seemed too leisurely.

There were twists and turns everywhere. We encountered rocks, roots, and sidestepped more than one mud puddle. The race was really well-organized, with volunteers and signs at just about every turn. There were clocks at the mile markers along with volunteers calling out the paces.

I admit I did miss my music during some of the race, but I also appreciated being able to hear everything around me. At one point, I heard “Smile! You’re on camera!” and I’m glad I heard it because it resulted in these pictures:

By the way, I love when LIRP takes the race photos because they’re always great and they’re free! Here are literally hundreds more pics of the race.

Here’s another they snapped with me in it. I look very serious here.

By the time we hit the second mile mark, I knew I wasn’t going to break an 8:00 pace – but that was okay. As I heard from everyone later, trail races are tough because of the terrain and conditions. It’s not a race you’re going to PR in. This is okay, I told myself over and over. And over.

By the time we came out into the clearing we had maybe a half mile to go, and by now there was nobody to be stuck behind – but I still found it difficult to gain speed. Grass + wind = slow.

I crossed the finish at 25:57. Not my fastest, but a hell of a lot faster than the road 5Ks I ran even just last summer.

Interestingly, my Garmin said my pace was 8:08. Hmm. I’ll go by the official results, though.

To be clear, it’s super not a big deal that I didn’t do AMAZING in this race – just interesting to analyze this stuff.

Anyway, I was happy to get back before 30 minutes so I could capture a couple pics of the start of the men’s race: 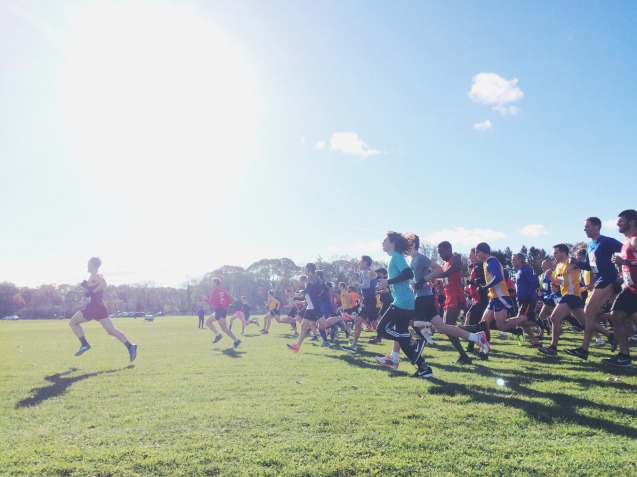 I didn’t stick around for too long afterwards. Just long enough to grab a donut (in my favorite flavor: PLAIN!) and a banana and protein bar and meet a nice woman in the bathroom named Barbara who saw me drying my armpits with paper towels and recommended using baby powder post-race on your sweaty parts.

Oh, we also got a nice little tumbler:

I actually used the tumbler on my way to the mall later that day, and it worked great. The mall trip was good and productive. I bought four things I really needed: three bras and a new iPhone.

It was a day of new experiences, new products… and leftovers. All good things.

(p.s. I was not kidding about plain being my favorite donut flavor.)