Today’s leggings are also brought to you by Moret Ultra, a brand I discovered at Modell’s this past weekend. They fit me nicely and were cheaper than Nike and Under Armour, so you know what? I bought them.

I like this design. It reminds me of those shirts from the 80s that looked like a tiger swiped at you through its cage. They also had ones where the color peeking through was pink, but I didn’t want to indulge in too much flashiness. Gray for me, please. No need to get carried away.

I also took a picture of my new running hat. Before this I was wearing a knit hat that’s nice but I was always pushing it down my forehead because it’s a little too big. This brand is Under Armour because I wanted a very plain hat and they apparently make them. 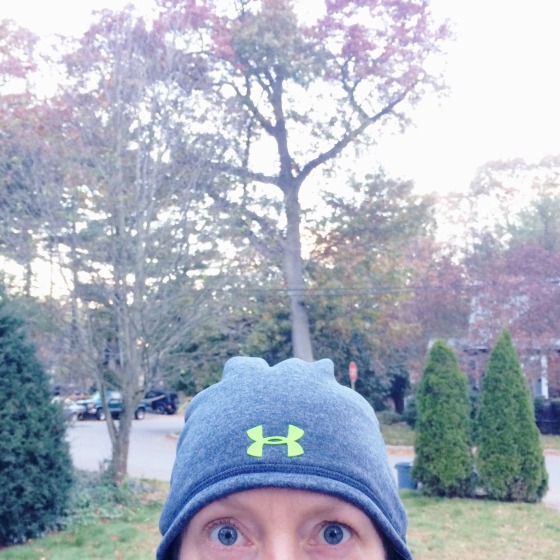 I admit, I’ve been putting off writing today’s post because I had no idea what to write about today. Granted, I almost never know exactly what I’m going to write about until I get here. Usually what happens is I get an inkling of what I want to write about during my run, and then when I sit down to write, whatever comes out comes out.

One thing I thought about during my run is that this hat is a men’s hat. I know this because it said “Men’s” on the tag. I bought it anyway. First of all, just like men, I also have a head. It’s shaped like and roughly the same size as most other heads. So I thought, well, it’s a hat for a head. And I have a head. Seems like I should just buy it.

It’s also gray. The women’s hats might have been blue and some other colors. But I wanted gray. Because I like gray.

This made me think of how I’ve never had too much of a problem enjoying things made for men or boys. Like when I was a kid, I liked playing with Barbies (especially that hair twisty one) but I also remember really wanting both an Atari and Matchbox cars. It never really occurred to me whether toys were for girls or boys. I just liked what I liked. I grew up with the sense that boys and girls were equals.

My mother had a hand in that. I’ve described her as a feminist, and she was, but more through her actions rather than words (an exception being the time she jokingly yelled to a bunch of construction workers with a Men Working sign “WHAT ABOUT THE WOMEN?!”). I don’t ever remember her talking about feminism. Her ways were more subtle. Take, for example, the Boogeywoman.

What I didn’t realize at the time was just how unusual it was for a parent to assign a female gender to a monster living inside of a closet.

Only years later did I realize how odd – and how cool – it was of her to make a monster a female. And why not? Ladies can be monsters too. How else are they going to make baby monsters? What I really love is that she never made a big deal out of the fact the monster was female. The Boogeywoman was just a woman. Living in our closet. No biggie.

She taught me that girls can be anything we want. Even monsters.

I’m the one with a Twizzler in my mouth. Typical.