Wednesdays have typically been my speed work days. I like having a set routine where I do the same things on the same days every week. It’s easier to remember what I’m doing, I don’t have to think too much, and it makes it a lot easier to not skip a specific workout. Sometimes being boring is good!

For a while I was going to my old high school track and doing fast/slow 200s or 400s. Then I read something that suggested not doing speed work on a track, so last week I did it on roads. THEN I read something that said doing speed work on BOTH a track and on roads was okay, and because I am very susceptible to things I read, this morning I decided to head back to the track.

It was a super foggy morning. My app said it was 100% humidity (which I could have guessed based on how my hair looked when I got back home). But I love mist and fog – they make for great pics. 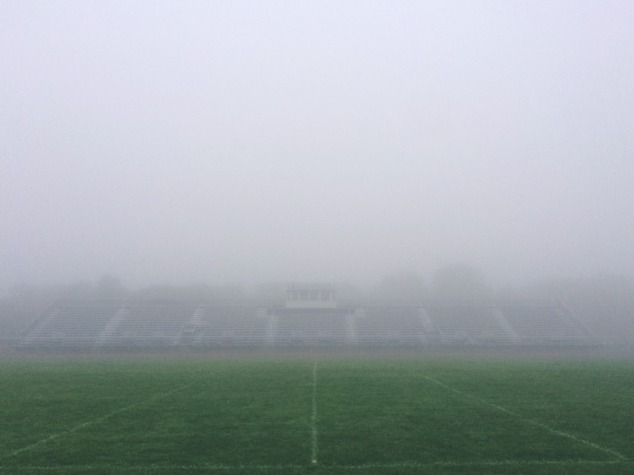 On the way there I was worried that now that the school year has started, there would be sports teams using the track. And I am still intimidated by large groups of teens. But then I realized that all that stuff happens after school. When I got there, there were just two older people walking around the track. Perfect. Another day not bullied by teens!

Since my big goal right now is to run next year’s Cow Harbor 10K at a 7:30 pace, I decided to see what that pace just felt like – even if it meant only keeping it up for 30 seconds. I ran last June’s Northport Nautical Mile at a 7:49 pace, so I knew what THAT felt like. And I knew THAT was hard enough to keep up for 9 minutes, let alone 46 for the 10K I want to run. But I wanted to see what being in the 7:00 range felt like again.

I ran an easy mile to the track and then stopped to set mapmyrun to prompt me every tenth of a mile, using the smallest interval available on the app. Then I did several alternating fast/slow tenths of a mile (1/10 of a mile is slightly less than halfway around the track). My slow paces were all somewhere between 9:30 and 10:30.

My fast splits were 7:16, 7:34, 7:09, 7:22, etc. All within that range. I think I only did six or seven, as once again, I felt short on time. I think I spend too much time between my pre-workout snack and getting out the door. I need to experiment with that. I only usually eat a couple figs and a medjool date – it’s not like I’m eating a plate of lasagna. I should be good to go within 5-10 minutes.

So for the most part, the fast splits were slightly faster than my goal 10K pace and in the range I was shooting for today. While that’s good, I still have a lot of work to do. Those paces were HARD to keep up for long. Maintaining them for 46 seconds is one thing, but 46 MINUTES will be a BIT more of a challenge. But like anything else I want to improve, I’ll stick with it. Because what the hell else am I going to do? NOT stick with it? What good would that do?