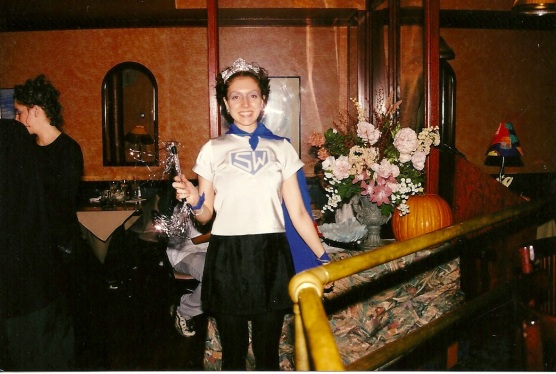 Age 24. Around the time I started to like running. I was waiting tables on Halloween one year so I dressed up as Super Waitress.

No run today, just a good upper body strength training workout courtesy of Fitness Blender. It’s my favorite one: Kelli’s Upper Body Workout for People Who Get Bored Easily – Arms, Shoulders, Upper Back. That’s literally what it’s called. I used 6, 8, 10, and 12 lbs. and probably need to step it up to 15 soon because the higher weights are getting too easy. I can’t believe there was a time not long ago when I only used 3 lb. weights.

My co-worker and I were talking about exercise this morning, and she told me that as much as she wanted to like it, she hated running. I remember feeling this way in my early 20s when I was in a relationship with a guy who ran a lot. I would follow him to the park, figuring I’d run with him – and then quickly realized I couldn’t keep up.

I was a really good runner as a kid, but had only done is sporadically as a teen and college student. I was trying to start it up again in my early 20s but didn’t know much about pacing or training or easy runs or speed work or just plain old going at your own pace. Because I couldn’t keep up with this TALL AND ATHLETIC MAN who regularly played soccer, I thought that I wasn’t “good.” And even when I tried running on my own, I’d get out of breath quickly and feel frustrated. So I thought I was naturally bad at running. Let me repeat, because it’s REALLY dumb: I thought I was naturally bad at running.

There was nothing physically wrong with me. It was an excuse I told myself so I could blame something – in this case, genetics and my inadequate, bad body – on my failure to meet my stupidly high standards. But for some reason I didn’t give up. I got a subscription to Runner’s World, a magazine I would get in the mail every month and read cover to cover for the next several years until I realized all of the articles, although good, were kind of just repeating each other. I stuck with it. But my frustration didn’t subside until I figured out one really super important thing I was doing wrong.

I WAS GOING TOO FAST.

This is why I was out of breath. This is why I was frustrated. I was going too freaking fast because I didn’t know any better. I thought running meant, like, RUNNING FROM A BEAR, like there was only one speed to run at and that was as fast as you could until your heart felt like it was going to burst out of your chest.

So I came up with a new strategy: I’d slow down. Like grandma slow. Like I-knew-people-were-going-to-stare-at-me-as-if-there-was-something-wrong-with me slow. Now, nobody stared at me at all, because honestly nobody cares what you run like or look like or do or wear or anything at all, as everyone is too wrapped up in their own thoughts and lives and insecurities to pay any attention to literally anything you do. But I was young and had not yet figured this out.

So I ran slower. And then something cool happened: I didn’t hate it. I wasn’t out of breath. I… liked it? I kept doing it, and eventually got to the point where I could run for 30 minutes straight. I kept adding minutes to my runs and soon was running an hour every week in addition to doing speed work and hills. I eventually reached that beautiful point – this took months, I think – where about 20 or so minutes into the run, I’d feel an overwhelming sense of calm and peace and even breathing, like I was taking a leisurely stroll at a pace I could probably do for hours. I wondered if this was the so-called runner’s high. I had never BEEN high, so I had nothing to compare it to. I just knew it was getting easier.

So if you’re frustrated because you’re not getting better fast enough, slow down. Nobody is looking at you, I promise. Unless you are actually running from a bear.