I have discovered Fit Snap. While I COULD just post a screenshot of my distance, duration, and pace, isn’t it more fun to see MY BEAUTIFUL FACE TOO?? I took this right after I finished this morning’s run. I couldn’t see the pic as I took it because I hate using the selfie camera on account of it being shitty and bad. I still have an iPhone 5S because I keep phones until they die. Edited with Faded. 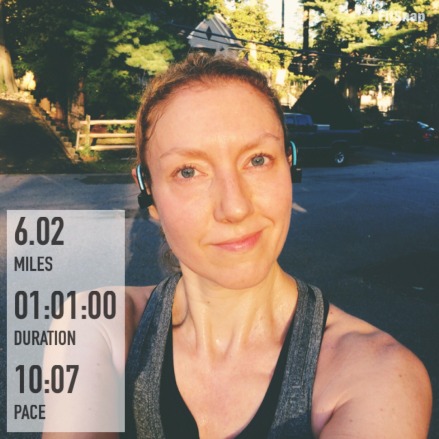 I wasn’t sure if I was going to do my 4.3-mile route or my 6-mile route today – my schedule is all messed up this week – but once I had to make the decision I figured I felt good enough to keep on heading north for the 6-miler. This route used to be my long run. Now, it’s my mid-week, mid-distance run. My runs usually consist of 3 miles, 4.3 miles, 6 miles, and the 10-miler on Sundays – which has been increasing in distance for the past few months. It’s currently at 10 but the idea is to keep increasing the distance until I guess I hit a wall or die or something.

I still can’t believe my “easy” pace is right around the 10:00 mark. This was UNHEARD OF for me for a long time. Here is what happened:

When I decided to take running more seriously a couple of years ago, I slowly upped my weekly mileage and started doing it super consistently. No days off because “I don’t feel like it today.” None of that bullshit. Unless I’m sick or injured or getting on a plane at 6am, I’m working out that day.

But it wasn’t until I started signing up for races and doing speed work a few months ago that I started having a “training” mentality as opposed to just a “jogging for health” one.

I did a 5K in August that I signed up for two days prior. I knew I had Cow Harbor coming up in a month, so I was just looking to do a local 5K just to see where I was at with my racing pace. It wasn’t far from where I live, it was a nice, flat course – seemed easy enough. I wound up placing second in my age group with a pace of 8:34 – nothing that’s going to win me any big money, but a solid improvement over the 9:00 and slower paces I used to run when I did 5Ks in my 20s. AND I got a pretty medal!!! So I was happy with the outcome.

But here’s where it got weird: my long run was scheduled for the next day, and even though I’ve heard you’re not supposed to run the day after a race, I didn’t want to skip it. I felt okay (which probably means I didn’t push the 5K as hard as I could have) and also my long runs are always followed by pancakes, and I really like pancakes a lot, so I really didn’t want to skip it. Because I wanted to eat the pancakes.

Before that August 5K, my Sunday long run paces had been:

So a very slight improvement over the course of three weeks. Not bad.

But my speed kept improving. I was also doing some speed work midweek, which I’m sure helped. But that 5K seemed to flip some switch inside of my body.

My next four Sunday long run paces were:

It was insane. I had never run this fast for so long before. I wasn’t even trying to go faster – my body just… wanted to? I didn’t seem to have much control over it. My body just WANTED it. And whatever part of my body that doesn’t have a say in how fast I run was just like, “Okay.”

It’s good to know there’s still room for improvement in your 40s, which I am by the way. I should probably mention that at some point. I don’t think it’s not insignificant, especially for anyone out there who thinks you can’t become a better athlete after a certain age. I mean, will I compete in the Olympics? Probably not. Unless it’s like, the Elderly Olympics. Is that a thing? Going to go Google “elderly olympics” right now.