Is every post title going to be a song title? Ugh, probably! I also need a new title for this blog. I hastily wrote “Run to You” only because I very lazily thought “uh what’s a song with the word run in it” so I thought of Bryan Adams’ Run to You because it’s one of my favorite songs of all time (and when I first saw the video, I immediately knew I was heterosexual. That’s why I know it’s not a choice!!!) But yeah, there’s no double meaning there. It’s just… a song title. It’s dumb and I will change it.

This morning I went out for the first time since the Cow Harbor 10K last Saturday. I think I’ll note the stats of each run because it might be a fun way to see my improvement over the next year.

This is from mapmyrun, which I’ve been using for a few years. I’ll probably do a whole post about that app at some point: 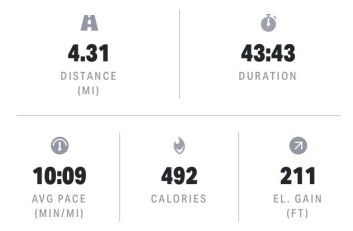 This was an easy run, meant to gently wake me up after last weekend’s race. If I saw this pace even a few months ago I wouldn’t have believed it. For the longest time I was running about an 11:00 on average – maybe occasionally, on a very good day, 10:30-45. But then I started doing speed work and shorter, faster runs mixed in with even longer long runs, and it’s really paid off this summer. This 10:09 was actually me telling myself to “take it slow today.”

I normally run five days a week, and the two days off (where I lift weights) are spread out, so not running for two days in a row was weird. I could swear I felt that itchy leg thing that happens when you don’t run for a long time, although it was more likely my fading poison ivy rash. I did my typical 4.3-mile route I’ve been doing ever since coming back to Northport last winter. I used to do it every day and now I do it about once a week because I mix things up now. This route is flat-ish: the first mile slightly downhill, then a flat mile, then a slight uphill, then flat, then down a bit, then slightly up again for the last mile. Nothing crazy.

The weird thing that’s happening now is I’m heading out at the same time I normally do, but it’s getting darker at that hour. I mean, it’s not WEIRD. It just happens due to how the Earth is tilted on its axis in relation to the sun. It happens every year. Anyway this is what my street looked like a minute or two after stepping outside at 6:20am:

I love heading out early but don’t love the idea of running in the dark, especially because the first mile I typically run is down a busy road with a not-so-huge shoulder. I just ordered a reflective light thing you strap over your torso, because all my workout clothes are like, gray and black. So I figured I probably needed something like that if I want to keep on living.

My main motivation right now and for starting this blog is the 2018 Cow Harbor 10K, which is 360 days from now. I like having both short and long goals! I signed up for three short races today, all coming up within the next month or so. Those are my short goals. But my long goal, which seems crazy right now, is this: I want to run a 7:30 pace in next year’s Cow Harbor. I ran an 8:48 this year. This doesn’t seem crazily out of reach. At least I don’t think. I guess I have 360 days to find out.